XIAOMI dazzled the tech world with the Mi Mix back in the day when the term “bezel-less” was first coined. Fast forward to 2018 and bezel-less phones are everywhere, so, is their latest iteration of the product, the Mi Mix 2S, worth a look?

Well, if you don’t like the currently trending notch displays, the Mi Mix 2S is one of the rebels that would fit your preference. The Mi Mix 2S doesn’t do much to change its aesthetics from the Mi Mix 2, which was released late last year so you are not going to find something brand new in it.

But, that being said, you can expect a bump up in the internal specs with a new and more powerful Snapdragon 845 processor. Without further ado let’s dive straight into the review. Given that it has been, give or take, just six months since Xiaomi released the Mi Mix 2 we can’t expect for there to be a lot of changes in this flagship device. As mentioned earlier, the Mi Mix 2S is nearly identical to the Mi Mix 2.

It still has a large 6-inch display with Full HD+ resolution that stretches nearly all the way to the edges of the phone. The Mi Mix 2S offers plenty of screen real estate for power users. Admittedly, the colours are a bit muted and it isn’t the brightest, but it provides an enjoyable viewing experience whether you are browsing the web, watching videos or playing games.

Turn the device around, and you will be greeted by the Mi Mix 2S’ reflective ceramic back. It still looks as stunning as before, giving it a unique look in the sea of glass and metal unibody smartphones.

Just like before, the fast-acting fingerprint sensor is placed squarely in the centre of the back. However, the most notable physical difference that sets the Mi Mix 2S apart from its predecessor is the dual cameras, now placed on the upper left corner.

On the bottom, you will find a USB-Type C port nested in the centre between the speaker and microphone. Just like the Mi Mix 2, you won’t find any headphone jack. Xiaomi has included a headphone jack adapter should you need to connect with wired headphones.

One addition to the Mi Mix 2S that you can’t see is its wireless charging capabilities. Indeed, this is great for those who want to free themselves from the hassle of plugging in their device to charge. It works with any charger that supports a Qi wireless charger that also works on your standard flagships like the Samsung Galaxy S9 or Apple iPhone X.

As mentioned before, the Mi Mix 2S sports the spanking new Snapdragon 845 processor, currently one of the best you can get, along with 6GB of RAM and 64GB internal storage. Just to note, there are other variants of this model with up to 8GB of RAM and 256GB of storage.

If you have a Mi Mix 2, the performance differences are pretty minimal, so we wouldn’t recommend an upgrade. But if you are moving up from a budget or mid-tier smartphone, you will definitely notice the buttery smoothness of the new Snapdragon processor.

Looking at the benchmark results, the Mi Mix 2S definitely has some notable improvements with higher Antutu, PCMark Work 2.0 and 3D Mark scores as compared to its predecessor. Against other flagship devices, notably the Samsung Galaxy S9, the Mi Mix 2S surprisingly performed lower in the benchmarks across most of them but trumped in terms of graphics.

Watching the 3DMark benchmark run, it was quite impressive to watch the Mi Mix 2S run the normally choppy rendering at such smooth frame rates.

In the real world however, these improvements are more difficult to spot and you honestly can’t tell one from the other when you put them side by side. Again, if you are upgrading from a lower end device, the difference will definitely be a huge boon.

Depending on whether you are a fan of Xiaomi’s MIUI 9.5 skin that sits on top of Android 8.0, you will either love it or hate it. It is an acquired taste admittedly. But given its vibrant community of modders that create unique themes, there’s always a fresh new look to sport every week.

Just like before, MIUI has some neat tricks in the form of full-screen gestures, that aren’t dissimilar to the iPhone X.

Battery performance is more or less comparable with the Mi Mix 2. The massive 4,400mAh battery ensures that this phone can run for more than a full day easily. One of the biggest gripes we had with the Mi Mix 2, was its cameras. They simply were not up to par given the phone’s flagship status. That has since changed with the current dual camera system the Mi Mix 2S rocks.

You get two 12-Megapixel cameras with the main one having a brighter f/1.8 aperture while the telephoto one has a f/2.4 aperture and offers 2x optical zoom. Other goodies that come with the camera include 4-axis optical image stabilisation that comes in handy when you need to steady a zoomed shot.

For the most part, the cameras performed well under most conditions. We got detailed looking shots with good colour accuracy. Low light, while good, is not as great as some other flagships but it is fine.

Video wise, you can expect to record up to UHD 4K quality so that should satisfy video hungry users. That being said, there is nothing else special about the video mode. No slow motion or fancy emojis.

If you don’t miss these side features then the Mi Mix 2S is a no-nonsense phone that does a competent job with both photos and videos. 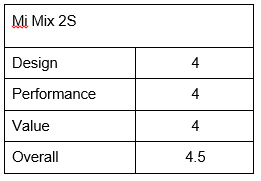 As the phrase goes, “If it ain’t broke, don’t fix it.” Xiaomi already had a killer product in the Mi Mix 2 and it didn’t change the formula by that much for the Mi Mix 2S.

In essence, the Mi Mix 2S may look familiar on the outside but is very different on the inside. It is a high-end phone that offers an attractive design, the addition of wireless Qi charging, improved dual cameras and a big battery for all-day use.

Priced at US$496 (RM1,999), Xiaomi is putting flagship phones firmly in the hands of the budget conscious user who wants more power without breaking the bank.

Though the changes are not enough to attract a recent Mi Mix 2 owner, it is definitely worth considering if you are moving up from a mid-tier phone.