XIAOMI has been improving and coming up with different variations of its budget-friendly Redmi models as of late. The Redmi 5 is its latest attempt at putting its own spin on a category normally perceived as “unsexy”.

We came to this review with relatively low expectations as almost all budget phones are starting to look alike, but this reviewer was pleasantly surprised by the breath of fresh air Xiaomi has injected to the Redmi 5.

No, this isn’t just a run-of-the-mill that is churned out of a factory, but something more. Join me and let's find out.

Many phone manufacturers have transitioned to FullView 18:9 displays though Xiaomi was a little late to the game. That has since been corrected with the Redmi 5 as it rocks it with a 5.7-inch display that has a respectable 1,440 x 720-pixel resolution.

There is plenty of screen real estate to read and view content comfortably, plus you can hold it with just one hand without too much trouble. 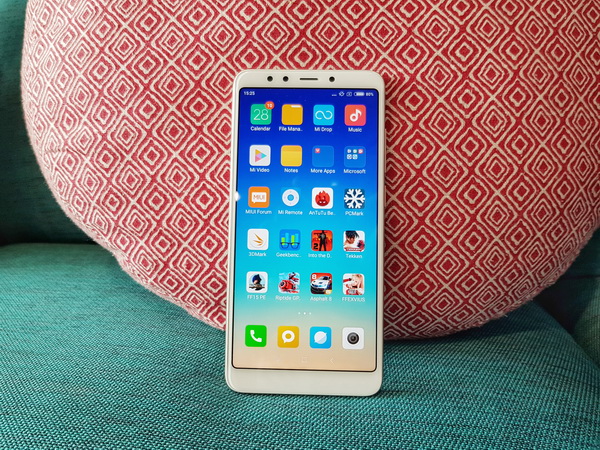 Picture quality and colour reproduction look good on the display and it is bright enough to be viewed outdoors. It is a perfectly competent display that gets the job done, making all manner of content pretty on the 2.5D curved edge glass.

The slimming of the bezels meant that Xiaomi had to move the navigation buttons onto the screen itself, which isn’t an issue considering that many phones are just like this.

Apart from the display, the Redmi 5 holds a very modern looking design. The backplate is made of metal while the frame surrounding it is made of plastic.

The power and volume button are housed on the right side while the SIM card tray slot and microSD card slot are on the right.

Xiaomi deliberately kept the speaker and microphone symmetrical to one another on the bottom side of the phone, flanking the micro USB port.

This being a budget phone, it is understandable why a micro USB is opted for over USB Type C, this is a strike against the phone as you will need to carry an additional wire around if the Redmi is your spare phone. Powered by a Snapdragon 450 mobile platform, the Redmi 5 is not going to be the fastest or most powerful smartphone on the market, but it is at the very least a power efficient phone that helps you get the basics done in a day.

Supported by 3GB of RAM and 32GB of internal storage, the specs are entirely unexpected for a budget phone. Onboard storage feels limited with 25GB left after you factor in the operating system.

But on the bright side, the Redmi 5’s 3,300mAh battery supports fast charging so you can expect to get it recharged to its maximum limit in just under two hours.

Productivity wise, the Redmi 5 had no trouble running the vast majority of apps that we threw at it from Facebook, Chrome, Twitter and down to most games that we played on our mobile. Benchmark results are respectable with Antutu and PCMark Work 2.0 scores within an acceptable range. However, the area of weakness is definitely in the graphics and multi-core performance on Geekbench 4.

Speaking of games, graphic intensive games tend to not run well on the device so games like Into the Dead 2 don’t look their best. If you are into PUBG Mobile, you will be pleased to hear that you can still play it reasonably well but have to compromise with uglier graphics.

The big battery was sufficient to last through an entire day of use with some extra battery left for the next day.

We have to say that the speakers are actually quite loud and clear for an entry-level model. This was noticeable when we tested it while watching videos and found the audio quality to be exceptional.

This being a Xiaomi phone, expect it to come with MIUI 9.1 running on top of Android 7.1.2. The interface holds no surprises for those familiar with abilities like split-screen still present and running smoothly, surprisingly. All in all, it remains quick and as responsive as before.

The sole downside of the otherwise functional interface is the inability to reply notifications like from WhatsApp or Facebook Messenger from within the notification tab.

As phones get thinner, the discovery of a 3.5mm headphone jack and IR blaster on top is a pleasant surprise that shouldn’t be taken for granted. The ability to remotely control lots of house appliances, be it your TV, fan or air condition unit, with Mi Remote still rocks. The Redmi 5 has a modest single 12-megapixel camera on its back with a single LED flash and Phase Detect Autofocus (PDAF) system and a 5-Megapixel front camera, specs that don’t come across as exciting.

On a whole, the camera has limitations that you need to work around. As it does not possess any optical image stabilisation, it performs poorly indoors or when there is lowlight. Disappointingly, it was very poor at capturing moving subjects even when there is a lot of available light.

While you do get decent and sharp photos, the low light photos are very grainy and soft due to noise reduction.

In short, these are the kind of photos that you can post on social media but wouldn’t want to blow up or print out. How many of us still do that anyway?

The Redmi 5 is only capable of recording videos up to Full HD quality at 30 frames per second. The quality is acceptable but it isn’t remarkable. The lack of any stabilisation means that you will need to keep your hands extra steady. To its credit, audio quality is decent.

The front facing camera doesn’t fare much better either, as you often get grainy and muddy looking selfies. The “Smart Beatification” function is usually switched on by default to “enhance” your photos, but to be honest the makeovers are usually too heavy-handed. If you have a steady hand you can bring out detail from close up shots like this. The camera is still capable of taking good shots though it only excels at still photography as moving subjects are often a blur. Low light shots tend to be underexposed, grainy and worst of all soft in detail. Colours still do manage to standout but details like sharpness suffers particularly for indoor shots like this.

The budget smartphone segment tends to be quite crowded but the Redmi 5 has just enough features to warrant some attention. It is great to see that Xiaomi included a big 18:9 aspect ratio screen that makes reading and videos comfortable on the device.

The inclusion of the power efficient Snapdragon 450, 3GB and 32GB of storage is nothing out of the ordinary but its efficient use of the battery is something that power users can come to appreciate.

However, the camera is the Redmi 5’s biggest letdown. It is not downright terrible as it can still take decent photos in daylight but if photography is important to you, then you may need to upgrade to a higher-end phone.

For US$176 (RM679), Xiaomi’s Redmi 5 ticks the right boxes if you want a big FullView screen in a compact body paired with good battery life. But be warned that if it is a better camera you are looking for, you may need to up your budget for say the MiA1. 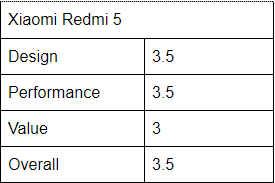