Review: Samsung’s Galaxy A9 brings the power of four into its cameras SAMSUNG has been banking hard on its Galaxy A-series to make a dent in the mid-range market. The Korean smartphone maker has had a tough fight in this segment thanks to fierce competition from Oppo, Xiaomi and Honor just to name a few.

But does adding more cameras on a smartphone make it a better phone? That’s what we are going to find out in this review of the A9 (2018).

At first glance, the A9 (2018) appears to adopt a new design language. It is part Galaxy Note 9 as well as something new and different. No doubt the four cameras on the back, arranged vertically in a row, makes it instantly recognisable. The glass back also has a nice gradient pattern that shifts and changes depending on your perspective. Admittedly I’ve seen this use of gradient colours on other smartphones but it looks like Samsung has finally caught on to the trend.

Another noticeable change in A9 (2018) is the placement of the fingerprint reader squarely on the back. This unlike the A7 (2018) that opted for a strange side-mounted position. When it comes to displays, Samsungs makes some of the best in the business. Once again, it brings it’s “A” game to the A9 (2018) with a massive 6.3-inch Super AMOLED display that would be great if you are looking for a really massive screen. In fact, it is just 0.1-inch smaller than the Note 9.

It has the same Infinity Display that Samsung has outfitted on the Galaxy S9 and Note 9, so it stretches the screen to the very edges though it has a small chin on the top and bottom. Still,  there are no annoying bezels to contend with.

Aside from the screen, the A9 (2018) is a solidly built phone with a frame made of metal and keeps the two glass pieces together. For its size, it is lightweight at just 183g.

On the bottom, you get a USB Type-C port (an upgrade from the micro USB port on the A7 (2018)) together with a 3.5mm headphone jack and a single speaker.

The SIM card tray is placed on top and it actually has three slots with two for accepting nano-SIMs and a dedicated microSD card tray.

Samsung moved the volume rocker to the right side together with the power button. Oddly, it has included a dedicated Bixby button on the left. I have no love for Samsung’s own take on the virtual assistant but if you are a fan, the inclusion should please you.

On the inside, the A9 (2018) comes powered by a mid-range Qualcomm Snapdragon 660. This is most unusual for Samsung phones sold in Malaysia as we are often treated to Exynos processors.

It comes paired with a generous helping of 6GB of RAM and 128GB of storage. Let’s not forget that you can expand that storage even further with a microSD card.

Applying our usual synthetic benchmarks on the A9 (2018) yielded respectable results that edge out the similarly specced Asus ZenFone Max Pro M2 by a little bit.

When it came to using the A9 (2018) in real-world settings, I found little fault in its performance. Using it as my daily driver, I was able to launch my usual social media apps and kept browsing the web without any issues.

While the A9 (2018) isn’t billed as a gaming phone, I must say that I was impressed at how it could handle Into the Dead 2 in high graphics, with relative ease. The volume of the speakers was sufficiently loud as the squishy sound of headshots rang during a test run against hordes of zombies.

With such a massive screen, it is no surprise that the A9 (2018) comes equipped with a big 3,800mAh battery that actually supports Quick Charge 2.0. Though it is not as big as the Galaxy Note 9’s 4,000mAh battery it has more than sufficient juice to power you through a full workday with spare power in the tank.

Personally, I used it for two and a half days of medium to moderate usage. Granted I wasn’t stressing it out completely by playing games or watching YouTube videos but used it for regular browsing. Surprisingly, I managed to get about 27 hours of runtime on a single charge. Now for the real reason for this review, mainly the chance to actually test the fabled quad cameras of the A9 (2018).

First to list out the cameras available on the back. Bringing up the front is the main camera, a 24-Megapixel f/1.7. This is complemented by a wide angle 8-Megapixel camera f/2.4 and a telephoto 10-Megapixel f/2.4 camera. The very last camera on the back does not actually capture photos but it is actually a 5-Megapixel f/2.2 depth camera, that helps the camera separate subjects from the foreground with a blurred background.

Whew, that is a lot of cameras to list out but are any of these cameras actually good? The main camera does most of the heavy lifting, delivering good daylight shots but doesn’t do so well in low light despite the f/1.7 aperture. I found photos too dim as it didn’t pull in enough light to illuminate scenes.

Separately, the telephoto and wide-angle camera are decent but again they only perform well when there is a lot of available light. It is worth noting that the wide-angle camera produces images with extreme amounts of distortion though this is easily remedied as there is an auto-fix button whenever a wide-angle photo is taken.

Another strike against the wide-angle camera is that it is significantly dimmer and lower in resolution when compared to the telephoto option.

Still, it is good to have a diverse range of options available on hand. I was surprised to find that Samsung’s Intelligent Camera feature from the Note 9 makes an appearance here, notifying you whenever a subject has blinked in a shot and prompting a recapture.

Let’s not forget that on the front is a 24-Megapixel f/2.0 selfie camera. Needless to say, this camera had gotten the least use during my test but in my brief attempts to selfie, I can say that the photos are well exposed and manage to balance out keeping details of one face and not blowing out the highlights.

Last but not least video quality. Though you can record up to UHD quality videos with the A9 (2018) at a 3,840 x 2,160 resolution or Full HD at 30 frames per second. The video is mainly captured using the main camera and there is an option to capture with the ultra-wide camera too though the quality is capped at Full HD.

For the most part, the footage isn’t terrible but it is not all that great either. It is good for casual recording but aside from that, it captures upload-worthy videos at the very least. 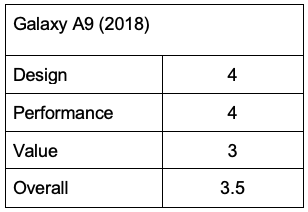 It is clear to see that Samsung has made a big effort to make a splash in the mid-range segment. The company certainly is not shy to inject a bit of creativity and craziness, if I dare say so, into the formula.

A big screen smartphone with four cameras sounds attractive on paper. But I say that we need to consider the sum of its parts first. Sure it has a super attractive Super AMOLED display, which is a strong selling point as it matches the quality of Samsung’s flagship devices.

The all-day battery is another positive for the phone and will serve you well if you are out and about often. Even the performance for gaming was surprisingly good. Also, the inclusion of a USB Type-C port is a good step forward.

But the fabled four-camera array on the back is disappointingly lacking in quality. No doubt you get lots of versatility from it, being able to zoom or pull back to wide-angle is great for mobile photography when you travel. However, the low light performance is severely lacking while the low resolution and heavily distorted wide-angle shots may not be everyone’s cup of tea.

So what does it all come down to? Price actually. Given how aggressive the competition is in the mid-range, a US$485 (RM1,999) price tag is not competitive for a phone in this range. The four cameras are by no means revolutionary so the only saving grace for it is the big screen and great battery life. Otherwise, there are plenty of alternatives out there to consider.