Review: Asus ZenFone Max Pro M1 has a monster battery that goes on and on ASUS has been jockeying for position in the mid-range smartphone race to a limited degree of success. This time, however, it might actually have a worthy contender in the form of the ZenFone Max Pro M1 (Max Pro).

Considering that the mid-range is a very competitive space, Asus needs to work extra hard to stand out. Fortunately, it looks like they just might pull it off as the Max Pro has an attractive sub-RM800 price tag, comes with stock Android and packs a massive 5,000mAh battery.

These factors alone, certainly caught my attention and I was eager to see just how well the Max Pro stands up to the competition.

As far as looks go, the phone appears to adhere to the same design language as the older Max Plus that we reviewed. However, Asus took the safe path and has not innovated on the design as much as I would have liked. Quite frankly, it is difficult to distinguish from the plethora of other phones released this year.

That aside, the 5.99-inch IPS display does at the very least resist including the controversial notch that is all the rage now. It is not truly bezel-less, with thick black borders on the top and bottom, but the 18:9 aspect ratio screen crams a big screen on a compact body.

Sporting a Full HD+ resolution, the display produced sharp and very contrasting images with good colour reproduction. All in all, a decent display whether you are reading text or watching videos. Turn the Max Pro around to find the dual cameras and fingerprint reader dead centre on the back. Now, the fingerprint reader on this device isn’t the best I have tested. Granted it is still very fast but you need to firmly place your finger on the reader to unlock your device.

Fortunately, there are other methods to unlock the Max Pro including a face unlock feature though, to be honest, this is less sure than using your fingerprint.

Disappointingly, the Max Pro utilises a micro USB port but that is not too surprising given its price range. The good news is that it still retains a 3.5mm headphone jack so you can continue using your legacy headphones.

Asus did well to anticipate that the Max Pro would serve as a phone for frequent travellers and it did so by including dual SIM card slots and a dedicated microSD card slot. Finally, you don’t have to choose between inserting a second SIM card or expanding your storage.

Under the hood, the Max Pro comes powered by Qualcomm’s mid-segment Snapdragon 636 octa-core processor. It comes in several different configurations that run up to 6GB of RAM and 64GB of internal storage.

Unfortunately, my review unit was the baseline 3GB of RAM paired with 32GB of internal storage. Suffice to say, storage was my chief concern as space was quickly being eaten up as I installed the standard test apps on the phone.

Fortunately, there is a microSD card slot to expand the available storage, mitigating some concern but honestly, 32GB is simply not acceptable these days.

Considering the Max Pro has the exact same processor as the Xiaomi Redmi Note 5 that I previously reviewed, I had an idea of what to expect when it comes to performance.

On paper, it looks to be a solid productivity-centric tool that should meet most users’ needs. The only catch is that it doesn’t fare so well when it comes to graphically-demanding games.

But from what I can tell from real-world usage, the Max Pro proves to be a reliable device when it comes to everyday tasks. No matter what I threw its way, the Max Pro managed to handle web browsing, social media browsing, photo editing and a bit of video editing without chugging under the combined stress of the running apps.

Gaming wise, the Max Pro proved to be a solid gaming device able to power through most demanding games. Racing in Asphalt 8 was very smooth while Into the Dead 2 needed to be adjusted to medium setting but otherwise ran without any issues.

There is a lot to be said about the Max Pro’s biggest and best feature, its 5,000mAh battery. Paired with the power efficient Snapdragon 636 processor, the Max Pro easily was able to last us two full days.

Even when I put the Max Pro to the test, after 15 hours of continuous use snapping pictures, browsing the web, watching videos and posting on social media, the phone still had 67% of battery left.

That is pretty impressive and there is no doubt that this phone will prove to be an invaluable secondary phone for any busy traveller. 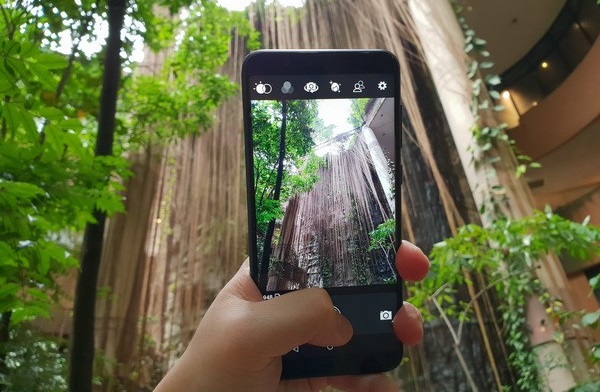 The Max Pro sports dual cameras, comprising of a 13-Megapixel primary camera paired with a 5-Megapixel secondary camera that allows snapping ‘bokeh’ or blurred background shots. To be perfectly honest, the camera is a bit of a mixed bag.

On one hand, one can only expect so much from a camera on a budget smartphone. Predictably, the Max Pro performs its best when there is plenty of sunlight. Images look sharp throughout and you can really pick out details like car number plates clearly. Colour reproduction is fairly accurate without it being over-saturated.

Don’t expect the Max Pro’s low-light performance to impress you. The resulting photos were often noisy, dark and blurry due to the lack of optical image stabilisation. This proved to be problematic when shooting indoors or whenever there wasn’t much available light.

It is commendable to note the Max Pro offers 4K video recording which is an option typically not found at this price point. While the 4K videos were smooth and highly detailed, when comes to low-light shooting, the resulting videos were often dark and noisy.

The selfie camera does a serviceable job offering all you could want with a beauty and portrait mode that can be used in unison, making that perfect selfie more achievable.

Kudos to Asus for providing a LED light on the front that really helps illuminate you if the scene is too dark. Despite it being lowlight, the mixture of colours come across clearly in this photo. 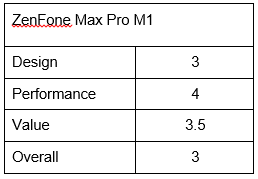 Asus needs a big break in the smartphone game and it looks like the Max Pro could be its ticket into the budget segment.

Though it does face stiff competition, the Max Pro’s massive 5,000mAh battery certainly helps makes its case. So if you are a power user who is constantly emailing, web browsing, Instagramming and such, this phone is perfect for you.

The Qualcomm 636 processor is one of the best processors that you can get on a budget. However, there are some compromises to be made with a less than stellar 3GB of RAM and limited 32GB of internal storage. Then again, if you are willing to up your budget to US$213 (RM849) a bit you there is the 4GB RAM and 64GB storage version, that definitely sounds more reasonable on paper. Go a little further up to US$250 (RM999) and you get 6GB of RAM and 64GB of storage.

The Max Pro’s dual camera leaves much to be desired. Even though it can take a decent image in bright sunny conditions, its low light performance is very disappointing with often underexposed, noisy and soft images. There is little excuse for the camera to be not up to par considering phones like the Xiaomi Redmi Note 5 offer better quality.

The sole upside to the Max Pro’s camera is that it can record video in 4K quality, though this isn’t enough to pull photography fans in.

Retailing at US$175 (RM699), the Asus’ ZenFone Max Pro M1 is a long lasting phone that is great for the all-day power user but suffers from limited storage and a poor camera.

Asus' ZenFone Max Plus M1 wants to go the distance