Acer’s Swift 5 laptops have always hit that sweet spot between being impressively slim and not wallet-bleedingly expensive. The 2019 incarnation, released late last year (Nov), remains committed to that positioning. This updated version doesn’t bring much to the table, but offers more of what’s already on hand – namely a slight reduction in footprint and a larger addition in performance.

The result is a slim, portable laptop that’s easy to recommend, barring a few issues I consider minor. What’s truly enticing here is the Swift 5’s price point. While we can see that the Swift 7 is an even slimmer device, the Swift 5 is more attractive in terms of cost and is equally light (both weigh a mere 990 grams).

So yes, to get ahead of the review, the Swift 5 is a worthy consideration for an ultra-thin and portable work machine. But let’s dive into the nitty-gritty, shall we?

Picking up the Swift 5 is like picking up a laptop wondering if it’s an empty alloy shell. In a bag, the weight barely registers. It’s, of course, impressively slim. This updated version is 14.95mm thin, which makes it almost 5mm thicker than the Swift 7, but at the same weight you hardly feel the difference.

The Swift 5 may feel light, but the construct is thankfully much tougher. The chassis is made out of light metal alloy, and no part of it feels flimsy as you lift, tilt and press on it.

It looks good too – the unit I got to use is in ‘Charcoal Blue’, which is classy-looking and sleek. There’s also ‘Moonstone White’ variants, which I’ll get to.

The extra thickness over the Swift 7 feels more justified when you see the type of connectivity the Swift 5 has to offer. There’s a USB 3.0 and 3.1 port on board, but more laudable is a Thunderbolt 3 port, which is always a nice addition especially for those who like to hook up their laptops to external displays. If that’s not cutting it, there’s also a HDMI port.

I wasn’t a fan of the Swift 7’s webcam placement, which pops up on the left side of the keyboard, so I’m mighty glad that the Swift 5 retains its 1MP webcam at its rightful place – on the top bezel. It’s not a particularly good webcam and produces some rather grainy images in dimly lit conditions, but it’ll work for the most part. 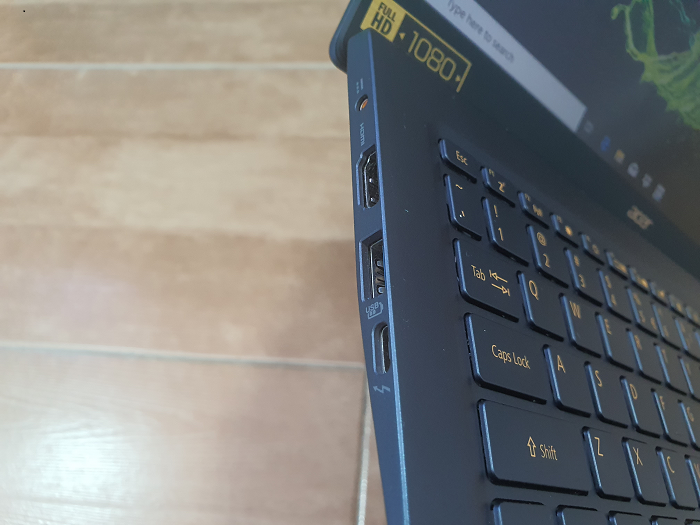 The Swift 5 features a 14-inch IPS display, which also happens to be a touchscreen. It’s responsive and works well, and it’s certainly much easier to pinch-zoom while working on documents on the go rather than relying on the touchpad, or when launching apps on the desktop. The hinges also keep the screen stable when poking and prodding.

As far as display quality go, the Swift 5 delivers a solid experience. This is a Full HD display, and pictures and videos look crisp. The colour pops and the brightness is sufficient. It’s not exactly ideal for watching anything too dark under the sun, but for the most part, the screen will function well for both work and leisure.

You get a pair of stereo speakers underneath the laptop, situated at the left and right edges. Down-firing speakers usually don’t conjure much confidence and won’t work as well if not placed on solid surfaces, but I found the volume loud enough for Netflix or YouTube in a quiet environment. It’s not for noisy environments, though.

On the laptop is a chiclet keyboard, which thankfully doesn’t have the odd keyboard layout that plagued the Swift 7. The typing experience is a mixed bag for me. While I won’t call it irresponsive (it does require you to be firmer with your key taps), the key travels are short and doesn’t quite feel right. It may be down to preference.

It does have backlight, which intensity you can toggle by pressing the F8 key (you can also turn it off). Excellent for banging out work at 3am during bouts of insomnia.

I have no qualms with the trackpad as well, and the mouse buttons feel just right. Acer has implemented a fingerprint scanner beneath the keyboard. It may be small, but it works like a charm, and serves as a good alternative to typing out a password.

The Swift 5 unit I have comes equipped with an Intel Core i7-1065G7 quad-core processor at 1.30GHz, which is the highest-end configuration you can opt for.

Coupled with 16GB of RAM and 512GB of SSD storage, what we have is a speedy laptop. It’s more than capable of handling Google Chrome with too many tabs open and will not have any issues handling Full HD video viewing. It also boots up in a snap, which is great for on-the-road work.

This version of the Swift 5 doesn’t come with a discrete graphics option, however, and utilises the integrated Intel Iris Plus Graphics. It’s not meant for graphics-intensive gaming like Gears 5, though titles like DoTA 2 can run without a hitch at middle settings. It can also run indie titles like Celeste and Hollow Knight perfectly fine as well.

As for battery life, the Swift 5 doesn’t disappoint. Spending all day working on Chrome with a bit of Netflix and Celeste in between, I managed to clock close to 9 hours on a full charge. That’s not bad at all, considering that it’s a tiny laptop and the relatively powerful hardware.

There’s also a model sporting the Core i5 processor alongside an NVIDIA GeForce MX250 discrete graphics card for RM3,999, which will be a good choice for those needing to deal with more graphics-related work.

The amount of options available is nice, though another variant sporting the Core i7 with discrete graphics would’ve been excellent.