HONOR Malaysia has officially launched a comprehensive line-up of lifestyle products on 7 April. This includes the HONOR 9X Pro smartphone, which stands out as the first HONOR smartphone to feature the Huawei AppGallery.

Malaysians will also be able to get their hands on the brand’s first notebook in the Malaysian market, the HONOR MagicBook.

But first, the 9X Pro. This is a 6.59-inch device sporting a FullView display with no notch or punch-hole camera in sight, as the 16MP front camera is hidden and protrudes from the top when summoned. The device is powered by a Kirin 810 AI Chipset, and will sport a triple-camera setup carried by a 48MP main camera, followed by an 8MP ultra-wide angle shooter and a 2MP depth sensor.

The 9X Pro features a 4,000mAh battery supporting 10W charging, and prices at US$229 (RM999). All in all, the device is similar to the HONOR 9X launched last year, but the 9X Pro will be the first to utilise Huawei AppGallery, which means no GMS (Google Mobile Services) but not exactly short of apps to use though.

The smartphone will only be available 17 April onwards at all HONOR Experience Stores nationwide. It comes with a free HONOR Band 5i, worth US$27 (RM119). 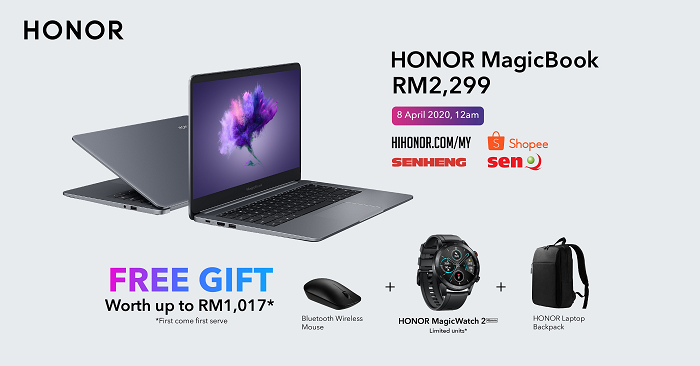 The HONOR MagicBook, on the other hand, is a 14-inch notebook featuring a full HD IPS display and runs on an AMD Ryzen 5 3500U processor with Radeon Vega 8 Graphics. The model Malaysians will be getting pairs those with 8GB of RAM and a 512GB SSD.

This notebook integrates its fingerprint sensor at the power button, and utilises a USB-C charging port (it supports quick charge, and eschews bulky chargers). On top of that, users get Dolby Atmos speakers with 3D surround sound.

The HONOR MagicBook prices at RM2,299 and goes on sale 8 April on Hihonor as well as HONOR’s official stores on Shopee, Senheng and SenQ. Each purchase will come with free gifts worth RM1,017, which includes an HONOR MagicWatch 2, a Bluetooth wireless mouse and the HONOR Laptop backpack.

Lastly, HONOR Malaysia also unveiled the Sakura Gold variant of its 42mm HONOR MagicWatch 2. The device runs on a KirinAI Chipset and is stated to have 7 days of battery life. The smartwatch will be getting the SpO2 blood oxygen monitor and female cycle tracking features via an OTA update on 10 April.

This smartwatch features a 1.39-inch AMOLED touchscreen and will come with 15 goal-based fitness modes and customised face watches. It prices at RM799, and will be available 8 April on the Hihonor website and HONOR’s official store on Shopee. Each purchase will be entitled to a free HONOR Sport Pro worth RM299. 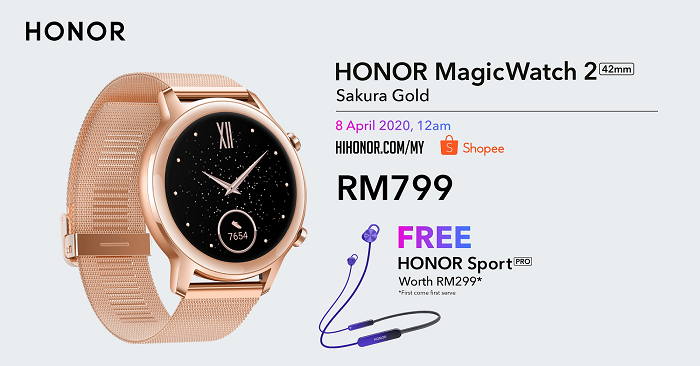 Presto! The new HONOR MagicWatch 2 is unveiled in Malaysia