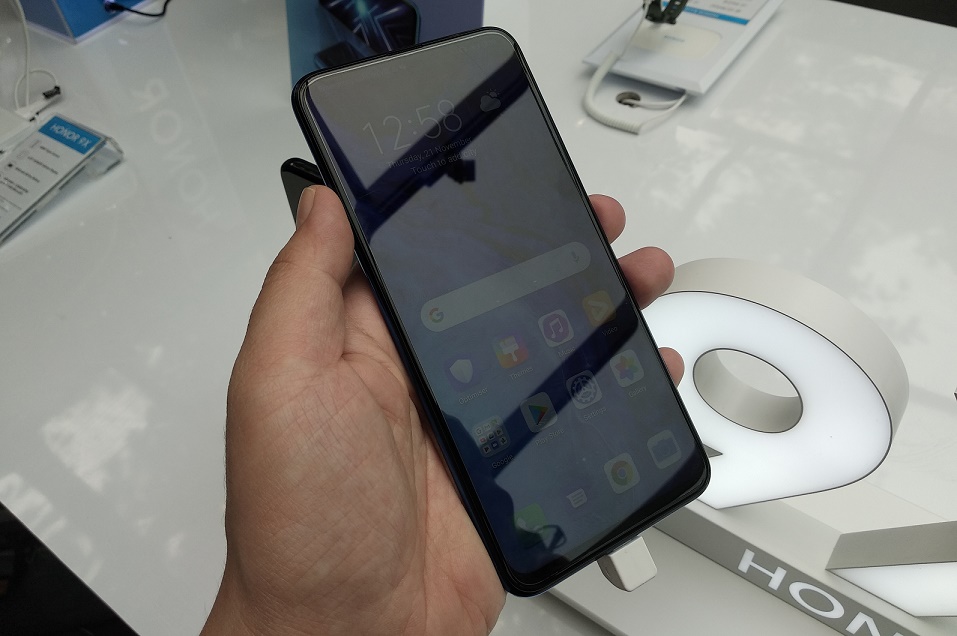 IT’LL be Christmas soon. It’s still more than a month away, yes, but it’s a good time to start planning wishlists.

Maybe your wishlist includes a mid-range Android smartphone that looks premium and doesn’t skimp on features. Maybe you’re pragmatic like that. If so, then the Honor 9X – launched in Malaysia on Nov 21 – could belong in that wishlist.

What’s instantly arresting about the Honor 9X – the latest in Honor’s X-series of mid-range devices – is its screen. This is a FullView Display, which means 6.59-inches of screen that isn’t impeded by any bezel, notch or punch-hole camera.

Honor touts a 91% screen-to-body ratio. It’s in FHD+ resolution as well – specifically 2340 x 1080p – on an IPS-LCD touchscreen that has a blue light filter. How the Honor 9X achieves this is by turning the 16MP front-facing selfie camera into a pop-up camera – the first Honor device to do so. This isn’t new, as the Mi 9T Pro and Reno 10x Zoom features similar design choices, but it does make way for an attractive screen.

From the little time I had, the camera popped up fairly instantly. In his product presentation, J J Kwan of Honor Global’s product marketing division took time to elaborate on the features in place to protect the protruding camera, including a fall detection feature that automatically retracts the camera when it detects a fall.

All about that 48MP Kwan says that the 48MP camera features a sensor size of the higher-end Honor View20, launched earlier this year. Shooting in 48MP technically allows the user to zoom in or crop photos without losing too much detail.

The low-light performance is also capable of rivaling the View20’s, with its AIS Super Night Mode and the Auto Ultra-High ISO feature that aims to provide more realistic low-light output without creating too much noise. The latter feature will be coming soon from December onwards.

The Honor 9X is powered by a 12nm Kirin 710F Chipset, which is an octa-core mid-range performance SoC (system on a chip). It has 6GB of RAM paired with 128GB of storage, which users can opt to expand up to 512GB via microSD.

Kwan adds that the Honor 9X features GPU Turbo 3.0, a feature that enables smooth operation of specific graphics-intense games such as PUBG Mobile and Arena of Valor.

The Honor 9X wasn’t the only thing announced by Honor. The company unveiled what they term as their first IoT strategy dubbed “1+8+N”, which is an ecosystem of connected products that support the Honor smartphone as the core. Some of these devices were announced alongside the phone, including the Honor Band 5 and Honor Band 5 Sport wearable trackers, pricing at US$30.94 (RM129) and US$18.95 (RM79) respectively. Honor also introduced the Honor Sport PRO headphones, which comes with an ergonomic neckband and sweat resistance. This one prices at US$71.71 (RM299). It’s been solid for Honor so far, according to Honor Malaysia country head Lydia Foo. The Huawei sub-brand saw 47% of compound growth rate from 2014 to 2018, with 66 million shipments last year. Saying that Malaysia is a “key market”, Foo announced that the Honor MagicBook Pro laptop is set to arrive in the country soon, as well as a greater variety of smartphones, wearables and other devices.

Pre-orders for the Honor 9X begin on Nov 22, on the Hihonor website as well as Lazada. The device will officially go on sale on Nov 28, and will be available on Hihonor, Lazada and Shopee as well as the Honor Experience Stores nationwide on Nov 29.

Pre-ordering on the Hihonor site allows users to add-on an additional RM0.99 to receive the Honor Sport PRO headphones, while Lazada pre-orders reward customers with a free Honor Band 5 Sport and a gift box.