I WAS about seven hours into Days Gone when I realised that I was bored.

That’s not a good sign. Sprawling, open world games like Days Gone – developed by Sony’s Bend Studio as a PlayStation 4 exclusive – are time sinks that demand dozens of hours from the player, enticing them back with lots to do, see and explore. You need to give them a reason to keep playing.

It doesn’t take long for the reasons to wane here.

Like The Last of Us, this is a harsh, cruel world where humans are as much a threat as the zombies (called Freakers here, for whatever reason) that inhabit the world. There are some survival elements here, in that you need to keep an eye out for supplies and scraps in order to craft healing items or weaponry.

And, like Horizon: Zero Dawn, this is a sprawling world with lots to do. There are Freaker nests to clear and missions to undertake from non-playable characters (NPCs). For the most part, you can choose between an aggressive, guns ablaze approach; or stealthily take out the enemy.

It’s an enticing combo, and a potentially potent one. Where Days Gone flops is in execution. You play as Deacon St John, a gruff, grunting, angry former member of a biker gang thrown into a zombie infested Oregon. Two years ago, before the apocalypse, Deacon (or Deek) was separated from his wife, whom he now believes is dead. Eking out an existence as a bounty hunter of sorts with his biker bro Boozer, Deacon primes himself to head north towards a more promising future. Things, of course, doesn’t go quite as smoothly.

Narrative-wise, Days Gone starts strong. Deacon positions himself as a fascinating protagonist – the post-apocalyptic lawless world, after all, seems suited for him. He’s a violent man relying on violent solutions, and his interactions with the people he encounters are poised to challenge his ideologies.

Early on, Boozer gets injured and Deacon’s motorcycle is taken apart. Left with little choice, Deacon has to stifle his lone wolf tendencies to work with a survivor camp in order to get the supplies he needs. Deacon’s morality is further challenged by another camp’s leader, Iron Mike, who strives for peace.

This sets up for some interesting development, at least on Deacon’s part. He’s not as heartless as the zombies that stalk the countryside – in the very first cut-scene itself, Deacon is established as loyal to his wife and friend. The unfortunate thing is that the game does little to let Deacon – and, by extension, the player – grapple with these conflicting ideologies.

Rather, the game much prefers introducing scenarios that put all of these debates aside, ushering Deacon towards dealing with new threat after new threat that eventually makes it clear that the game is more interested in the straightforward story of a man looking for love and home.

It’s not inherently bad, just not investing at all, especially in a time where zombie media has long introduced heavy-hitters like Telltale’s The Walking Dead and the aforementioned The Last of Us – games that delve into the nuances and tragedy of a zombie apocalypse with more panache and impact. 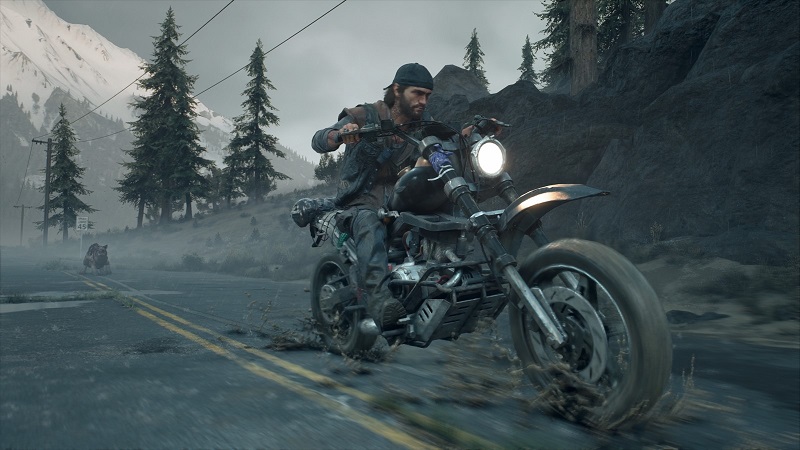 I won’t say that Days Gone is completely devoid of fun. The combat is well done, at least. Guns feel punchy, and melee attacks with either your knife or an assortment of melee weapons have oomph. When you get to craft stronger weapons – say, for instance, strapping a buzzsaw to a bat – combat can be downright satisfying.

Gameplay problems are more prevalent in the wider scope. After a few hours in, you’ll discover that Days Gone does little to deviate from the usual open world formula. Once the initial few tutorial-driven tasks are completed, the game gives you a checklist of things to do.

Maybe you ought to go hunt down those medical checkpoints that offer permanent stat upgrades, or burn a few Freaker nests to allow fast travel. There are side missions you can take on as well, including several that require you to sneak into camps and eavesdrop on paramilitary groups.

The formula here isn’t the problem, just the execution. Freaker nest takedown, for instance, gets repetitive quickly, as does tackling those medical checkpoints for those essential stat upgrades (Deacon even comments about how repetitive it is, which begs the question of why the developers never bothered to diversify it a bit).

Yes, all games have their gameplay loop, which inherently makes most games repetitive in nature. The challenge is to make the reward more satisfying – an aspect Days Gone is weak in. There’s little narrative reason to complete side missions, and often than not, tackling those is just so you get extra experience points to upgrade your skill tree. It’s like the game understands the need for these elements to exist, but cannot justify why.

There are some elements of the game that I truly liked. The Freaker hordes are a highlight. These are massive crowds of zombies in the hundreds, filling the screen in a way reminiscent of the World War Z movie. Taking them down is equally thrilling, requiring a lot of flight-or-fight situations, quick thinking and using the environment to your advantage.

My favourite aspect of Days Gone, though, is Deacon’s motorcycle. It’s your main mode of transportation around the map, and handles well. The motorcycle also serves as the save point and can be used to store extra supplies that may come in handy during sticky situations.

The bike runs on gas though, which can run out if you don’t pay attention, requiring you to scour the nearby area for gas. Sometimes this gets frustrating, but I welcome the change of pace. It can also get tense hearing your bike putter down while the sun sets, and you know you’re in Freaker territory.

The game lets you upgrade the motorcycle, hooking it up with speed, defence and gas upgrades (I recommend getting the latter ones first). It’s rather reminiscent of the Mad Max open world game by Avalanche Studios, though there’s little emphasis on vehicular combat.

Days Gone is also gorgeous. The Oregon wilderness can look stunning at times, albeit a little grey. Props should also be given to the facial animations, which give the characters a sense of believability, even if the narrative fails them. It runs decently on the regular PS4, but there are some notable screen rate drops during horde battles and when driving through certain areas.

Days Gone’s main storyline will take roughly 35 hours to complete, give or take the usual side quest diversions. You won’t run out of things to do, or areas to explore. It’s just really about finding the reason to do so, when the game doesn’t.