ON paper, Shenzhen-based Elephone had one of the most exciting product announcements in the first half of 2015.

Sure, you’ve probably never heard of the company, but these days, new smartphone brands from China are popping up like mushrooms after the rain.

Just have a look at this list of brands from an online store below and see how many you can identify: Among them, Elephone caught our attention with its Pioneer P7000. This 4G-enabled phablet comes with a powerful 64-bit chipset under the hood and 3GB of memory, runs on the latest Android operating system, features Sony’s camera technology, and sports a Full HD 1080P display – plus a fingerprint reader that’s similar to the one employed in Apple’s latest iPhone.

All that, for just under US$160 (excluding shipping).

The full retail price is US$230, but for a short period of time, the company’s pre-order ‘flash sale’ online promotion slashed the price by a whopping US$70, prompting buyers from around the world to send it to their shopping carts.

Unfortunately, our unit failed to arrive on time, and an official Elephone retailer confirmed to Digital News Asia (DNA) in an e-mail that demand had outstripped supply, forcing the manufacturer to delay some shipments. So now that we have the unit, does the Pioneer P7000 live up to the hype?

Elephone did a fairly decent job in terms of design. The Pioneer has a general metallic look about it, even though the only thing that’s actually metal is the frame along the sides. The removable back plastic cover is coated with a fine brushed metal finish with a fair degree of resistance, so it feels smooth but not slippery. The matte surface also means you won’t get your nasty fingerprints all over the cover.

This coating is one of the best we’ve encountered and better than the one used by Asus for the ZenFone 2. The cover is tightly clipped to the chassis with a tiny groove below to pry it open. You’ll have to apply strength to attach it back, but it stays securely locked in place.

Beneath the cover you’ll find a beefy 3450 mAh battery, slots for a standard SIM and a micro SIM, as well as the microSD for expandable storage. Near the top edge is the rear camera with a single LED flash, while a silver ELE logo is embossed at the bottom with the somewhat cheesy slogan, ‘Keep expecting and be surprised’ printed below (but thankfully not highly visible). Just below the camera, you’ll find the aforementioned fingerprint sensor, a one-touch solution that’s similar to Apple’s and Samsung’s current flagships, rather than the ‘swipe’ type scanner found on older smartphones like Samsung’s Galaxy S5. But more on that later.

Unlike some of its Chinese rivals, Elephone opted to place the power button on the right side of the device and the volume rocker on the left, though we wish they’re positioned a little lower. Below, Elephone designed a pair of speaker grilles, though the sound only emanates from just one of them. Meanwhile the micro USB port and the 3.5mm audio jack sit at the top. 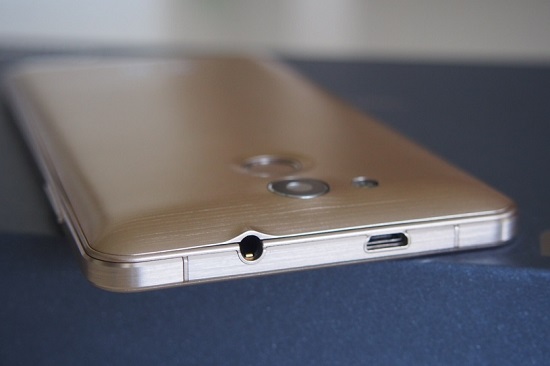 The 5.5-inch screen fills out the front of the device, but the bezels surrounding the display was a distraction, especially on the gold and white models, though less so on the dark grey unit.

In a market where manufacturers are gunning towards thinner bezels and higher screen-to-body ratios, Elephone still has some catching up to do. This smartphone isn’t the lightest around either. Weighing in at 160 grams, the heft is obvious, and we suspect it’s due to the metal frame, which we believe is meant to provide some rigidity (even though videos have popped up online showing how easy it was to deform the device).

Elephone included three capacitive keys below the display and while the centre ‘home’ key is backlit and doubles as a notification light with customisable LED colours, the symbols are missing from both sides of the ‘home’ key.

This is a curious design decision and possibly the only phone with invisible capacitive buttons. And by the way, the one on the left is a ‘menu’ key and the one on the right activates the ‘back’ function. Since the Pioneer is one of the first mid-range smartphones available with a one-touch fingerprint-based biometric solution under US$250, we were eager to test out this feature.

We can confidently say, after having used it extensively, it’s not perfect but it works conveniently well.

Unlike the iPhone, where the sensor is placed at the front, the Pioneer’s fingerprint sensor is found behind the device. We found this position to be convenient enough for our index and middle fingers to reach, but clearly our thumbs won’t be the primary key to unlock the device. The software used to register our fingerprints was fast and painless, and integrated well with the rest of the security settings.

The bonus here is that you can use the fingerprint reader to unlock apps as well, rather than just the phone.

However, when it comes to accuracy in detecting our paw marks, eight times out of the 10, the sensor correctly detected our fingerprint the first time we tapped on it. For the two failed tries, it worked with a second tap. The Pioneer’s display is your standard Full HD (1920 x 1080) resolution IPS (in-plane switching) panel affair, with colours that are on the warmer side. The blacks could have been deeper but it’s not bad by any means. And while the brightness is good indoors, it didn’t perform as well in bright sunlight.

Our unit also had a tiny spot on the display which is brighter than the rest of the panel, and which brings the quality into question.

Thankfully it’s not perceptible unless you are looking at a completely white image. The camera however is average at best. While the rear 13-megapixel shooter offers an HDR (high dynamic range) mode for high-contrast conditions, a panorama function, and even a picture-in-picture effect, the image quality is hit-and-miss, and we had to take a sequence of photos in order to get a good one. Part of the problem is that the camera tends to default to a lower shutter speed in order to capture more light, and as such the photos tend to be blurry due to camera shake. Under low light conditions, this gets even worse. The front camera, despite having a 5 megapixel sensor, disappointed even more, as our selfies turned out grainy (or noisy) for the most part.  We certainly hope future updates would deliver improvements to the imaging software.

Elephone’s Pioneer is powered by MediaTek’s MT6752 chipset, one of the best-performing mid-tier processors in the market today, going by CPU benchmark tests.

Clocking at 1.7GHz, and supported by a generous 3GB of RAM, this octa-core 64-bit chipset brings more than enough firepower to run any app or game we tested.

In our browsing and multi-tasking tests, we were able to comfortably open up 20 browser tabs as well as 30 different apps at the same time, without facing any lag. The integrated Mali T760 graphics processing unit is also highly capable of running resource-intensive games like Hearthstone Heroes of Warcraft and Ridge Racer Slipstream.

In other words, the base hardware is a proven piece of kit. The 16GB storage provided around 12.4GB of usable space, with support for more storage through a microSD card. Unlike well-known Chinese brands like Xiaomi or Lenovo, Elephone didn’t attempt to push out its own user interface (UI) on top of Android 5.0, leaving the ‘Lollipop’ experience pretty much the way Google designed it.

That’s really great news for ‘pure Android’ fans who often complain about UI customisations to the operating system, be it Samsung’s TouchWiz or HTC’s Sense.

The only issue here is some early customers couldn’t update the phone’s software unless they downloaded the image from the Web and used a special PC-based ‘flash tool’ to perform the upgrade.

In terms of call quality, it was expectedly functional but nothing out of the ordinary. The speaker however initially sounded too soft but a recent software update improved the situation.

Battery life is commendable and indicative of the relatively large battery supplied, but believe it or not, Elephone already has a P8000 model in the works with an even larger 4165mAh battery.

Regardless, the Pioneer lasted about a day and a half for us on average use and about one working day if we included long bouts of gaming on the device.

Don’t expect this device to sell for US$160 in the short term, unless it’s during a special ‘panic buying’ sales promotion which China and Hong Kong-based online retailers are so keen to organise these days. However, we have also found it being hawked for about US$210 at certain outlets for a limited period, so that may be a better option.

The biggest competition for this phone is probably the upcoming P8000 (US$210), which has a larger battery but a slightly slower processor, or the Ulefone Be Touch 2 (US$230) which positions the one-touch fingerprint reader on the front of the device. The Ecoo E04 (US$190), meanwhile, features a front-facing ‘swipe’ type biometric reader.