AS the market for 2-in-1 hybrid devices start to take off, PC vendors have pretty much settled on two distinct form-factors after years of experimentation: Convertibles and detachables.

‘Convertibles’ refer to laptops with highly flexible displays so they can fold over and lay flat, turning it into a tablet. Examples include the Lenovo Yoga 3 Pro, HP Spectre X360 and Asus Transformer Flip.

On the other hand, ‘detachables’ are typically sold as tablets first, since all the hardware is housed within the display unit itself, but you can easily attach them to keyboard docks and use them like laptops, such as the Surface Pro 3 and Dell Venue 11 Pro 7000.

The Transformer Book T300 Chi is the latest from Taiwanese tech giant Asus in the detachable space.

Being one of the earliest manufacturers to offer detachable PCs, Asus typically bundles the keyboard as part of the overall package, unlike its competitors (we’re looking at you, Microsoft) which sells the keyboard as a separate (and not inexpensive) accessory.

The T300 Chi comes out of the box looking like a typical notebook, and if no one told you that you could separate the display from the keyboard, you probably wouldn’t realise it.

That says a lot about how seamless the design is. Previous generations of detachables always had a latch or locking mechanism you had to slide or push, in order to release the tablet … plus the tablet would generally be a lot thicker than the keyboard dock. Not so with T300 Chi. Asus made use of strong and cleverly-positioned magnets to hold the tablet and keyboard together. All you need to do is give it a tug, and the tablet detaches from the dock easily.

Joining them back is a matter of aligning the magnets on the dock with the slots at the bottom of the tablet. You could also turn the tablet around and attach it so that the display faces away from the keyboard, ideal for presentations and watching movies. We tested the strength of the magnets and can safely say that both parts of the device held together very well in both open and closed positions. It didn’t matter if we held on to just the tablet or the keyboard – neither would detach until we pulled the tablet off using a small amount of strength. The other highlight is the thinness of the tablet itself. Thanks partly to Intel’s new Core M processor which ditched the cooling fan, the designers at Asus were able to squeeze a whole Windows PC into a slab that’s just 7.6 mm thick.

The result is a tablet that is almost as thin as the physical keyboard dock, providing a visually pleasing symmetrical design. 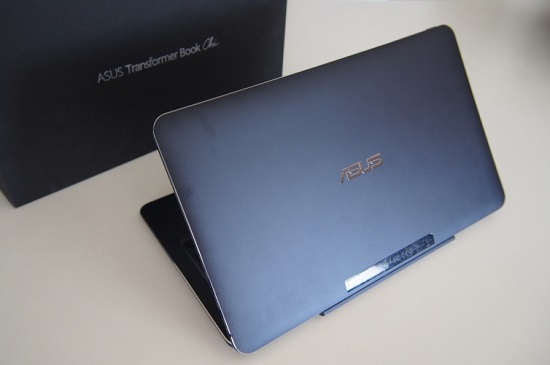 The tablet’s chassis, cut from a single block of aluminium, has a smooth matte black finish and a silver-coloured chamfered edge around the unit, providing a touch of class.

Both the keyboard and tablet weigh roughly the same, at around 700 grams each, providing a good balance when using it as a notebook. Previous entries in this segment have tended to be top-heavy and awkward to use on non-stable surfaces, such as our laps.

The downside is, when attached together the T300 Chi breaks past 1.4 kg, which is heavier than expected from a supposedly ‘thin and light’ PC, and perceptibly heavier than rivals like the Surface Pro 3 (1.1 kg) or even the 11-inch MacBook Air (1.08 kg).

The power button resides at the top left of the tablet, while a charging port sits at the bottom left corner. On the right side, you’ll find the micro USB port and micro-HDMI connectivity port, as well as the 3.5mm headset jack.

Just make sure you don’t accidentally plug your power cable into the audio jack since the size is similar!

On the left side near the top corner, you’ll find the volume rocker and dedicated Windows key, while the stereo speakers take up the middle portions of the left and right sides.

There is also a micro SD slot for storage expansion at the bottom side of the tablet, so you’ll need to detach it from the keyboard in order to insert or remove the memory card. Unfortunately, due to the tablet’s thin profile, there is no space for a full USB slot. Asus bundles along a ‘micro USB to USB dongle’ as a solution, but the challenge will be bringing that attachment with you everywhere (provided you don’t misplace it). Regardless, the dongle is pretty unsightly, so you would probably want to rely on Bluetooth if you wish to use a separate mouse, and stick to cloud services to transfer files, rather than a USB flash drive.

The keyboard dock pairs up with the tablet via Bluetooth, but that means the built-in battery needs to be charged separately, using any standard micro USB charger. It doesn’t come with its own power adapter but Asus provides a cable with micro USB connectors on both sides, so you can use the tablet to juice up the keyboard when needed. Typing on the keyboard itself is a pleasure, as the keys provide good tactile feedback and travel. The touchpad however, isn’t as deep as we liked, so we resorted to using an external mouse and touchscreen most of the time. It’s no surprise that we found the T300 Chi more useful as a laptop or a kiosk (with the screen facing away from the keyboard) than a detached tablet. The 16:9 aspect ratio isn’t ideal for one-handed tablet usage, as it comes across as being too long on one side. Holding the tablet horizontally will generally be safer with both hands to support it (especially for young children) and in the vertical position, the one-handed grip just didn’t feel that comfortable at all, much less reading from it. The review unit that Asus provided us is powered by the aforementioned Intel Core M-5Y71 processor with an integrated graphics chip, along with 8GB of memory and a 128GB solid state drive.

That 8GB makes a huge difference in the device’s multitasking capability, and should really be the default memory configuration for these 2-in-1 devices, since you can’t upgrade the memory yourself.

As expected, the performance was relatively fast and lag-free, whether browsing, or switching between desktop applications and modern Windows apps running in full screen.

In the past, we’ve often struggled with sluggish Windows 8 performance on other PCs or tablets simply due to the lack of RAM. We were able to run many of the games from the Windows Store without any hitches such as Dungeon Hunter 5 and Fast & Furious 6, although it couldn’t hold up to the demands of Rayman Fiesta Run.

Games running on Steam were less predictable, but generally titles with high-quality 3D graphics needed to be brought down a notch in order for them to run smoothly.

In short, this is no gaming PC rig, but the Windows tablet-based games will do fine.

Productivity apps and multimedia content all worked well on the T300 Chi. Asus did preload the PowerDirector app for simple movie editing and PhotoDirector to create photo collages, but aside from those, the amount of bloatware was thankfully, limited.

Some of the utilities are genuinely useful, like its Splendid display widget which quickly changes the display configuration to better suit your needs, such as ‘Vivid’ mode when watching movies and ‘Eye Care’ mode when reading or browsing the Web. Speaking of which, the 12.5-inch Widescreen QuadHD IPS (In-Plane Switching) display (2560 x 1440 resolution) is razor sharp and the colours are well-balanced in the ‘Normal’ mode.

IPS panels are well-known for their wide viewing angles so that didn’t disappoint, but the maximum brightness was a bit of a let-down.

However, having the screen dimmed at a lower brightness setting may not be a bad thing, considering the paltry battery life. The tablet could only muster between five to six hours before needed to be plugged in.

For a mobile PC product, that’s almost a deal-breaker for us. After all, we would expect to use our tablets when we’re out and about, and while we didn’t expect a full eight hours of battery life, five hours seems too much of a compromise.

Unlike Microsoft’s Surface 3 that can be powered using a portable battery and micro USB cable, the T300 Chi utilises a proprietary power adapter, making it inconvenient to charge on-the-go.

Hopefully with the Windows 10 update, software enhancements and power-saving utilities would help improve the situation.

We’re certain at least, Windows 10 will improve the overall experience on the device, since the operating system was designed to take advantage of the flexibility of 2-in-1 hybrid products, with enhanced user interfaces for both notebook and tablet modes.

The T300 Chi is priced at S$1,498/ RM3,199 which compares quite well against Microsoft’s Surface Pro 3 (Core i5 processor and 128 GB storage), considering the Surface only comes with 4GB of memory in this configuration.

The other plus point is that the T300 Chi is bundled with the keyboard.

We see the Transformer Book T300 Chi primarily used as a laptop and a credible replacement for the traditional clamshell notebook PCs. The tablet form factor should kick in only when users need to shed off the weight of the keyboard and use it for media consumption or short bursts of gaming.

Asus has delivered a competent 2-in-1 hybrid here that has a good balance of performance and stylish looks, but the weight, the widescreen aspect ratio and weak battery may put some off, especially those who hope to carry it around as a Windows tablet, rather than a notebook.