THERE was no doubt that Microsoft Corp would launch a smaller, cheaper version of its popular Surface Pro 3 tablet.

Considering the relatively high price of the Surface Pro 3 and the productivity-friendly screen size (12 inches diagonally), it leans more towards notebook PC than tablet, and isn’t as portable as an iPad Air.

The previous model, the Surface 2, was powered by the touch-friendly Windows RT operating system and battery-efficient ARM-based hardware, supporting only ‘modern’ Windows apps and unable to run legacy Windows programs.

Suffice to say, that strategy failed spectacularly and Windows RT has been dragged through the mud and into the proverbial Recycle Bin.

The Surface 3 then is Microsoft’s latest attempt at a consumer tablet that would appeal to a wider audience and keep users hooked to the Windows ecosystem, lest they jump ship to iPads, Android slates or even Chromebooks.

This time around, rather than offering a hobbled Windows OS, the technology giant is providing the full Windows 8.1 experience on a mainstream-sized tablet, which will be upgradeable to Windows 10 when it launches. 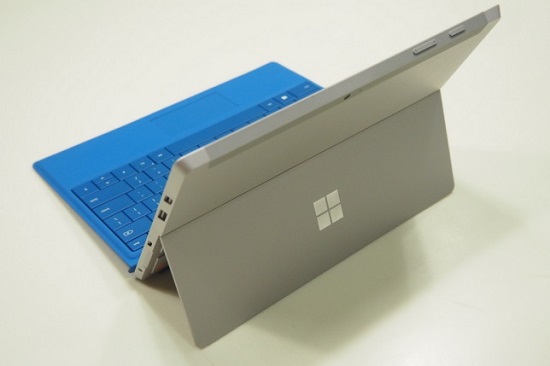 From a design standpoint, the Surface 3 is basically a mini version of Microsoft’s Surface Pro 3. The brief seems clear: Take the winning design elements from Surface Pro 3 and release a device that meets a lower price point and in a smaller form factor to address a larger audience, while competing directly against iPad Air.

As such, you will find that the design cues from Surface Pro 3 have been left intact. The 10.8-inch screen, surrounded by a relatively thin (0.6-inch) black border, greets you on the front, while the back is made from the same grey magnesium alloy construction as the Pro, giving it a nice, solid feel. The display ratio is maintained at 3:2, which makes it more comfortable to carry around – especially in portrait mode. The weight balance feels better compared to a long-ish 16:9 tablet. The kickstand folds out from the back and locks into three different positions – a slight downgrade from the Pro, which allows you to adjust it to any angle.

We found the three positions good enough for a variety of use-cases, including our lap, a table or an airline seat tray. The power button and volume rocker are placed at the top left edge (pic below), similar to the Pro 3.

The rear camera received an upgrade from the Pro 3, with the 8-megapixel shooter placed at the centre near the top of the unit – but it doesn’t remove the awkwardness of using a tablet for taking photos, though. Overall, the style quotient is high and we wouldn’t be surprised if some people opted to purchase the Surface 3 based on looks alone.

Microsoft reverted to the x86 architecture for the Surface 3 after its ARM-based attempts with Surface 2 and Surface RT.  This is the first hardware device to utilise Intel’s new ‘Cherry Trail’ chipset, also known as the Intel Atom X7-Z8700.

This fan-less quad-core chipset may bear the name of the infamously under-powered processor used in netbooks (remember those?), but the X7 is a new breed altogether – more powerful, much quieter and more battery efficient, so much so that it relies on a smartphone-like micro USB charging mechanism. The 1080P (1920 x 1080 resolution) display comes with a pixel density of 213, similar to the Pro 3.  More importantly, it is sufficiently bright and the contrast level is excellent, although the glossy screen is a tad too reflective especially in brightly lit environments.

Regardless, the screen is definitely one of the highlights of the Surface 3.

The device comes with two configurations. The entry model comes with 2GB RAM paired with 64GB of storage, while the higher-end version is fitted with 4GB of RAM and 128GB of storage.

We would recommend going with the higher specified version, since Windows applications are typically resource-hungry, and 2GB of memory is simply insufficient for a smooth, lag-free experience. The optional Surface 3 Type Cover keyboard attachment comes in five different colours (black, blue, bright blue, red and bright red) and is made from a nice felt material on the back. It attaches via magnet to the Surface 3 and like the Pro 3, provides two angles to choose from. The typing experience is fair but not great, and the trackpad is too small to be really useful. We resorted to using the touchscreen most of the time, or simply plugging in a mouse. Microsoft would have you believe that the Surface 3 is a laptop replacement – and to some extent, we agree.

However, there are many hoops to jump through before you can confidently ditch your notebook PC for a Surface 3.

Firstly, you would need to purchase the Type Cover keyboard which adds US$130/ S$199 to the cost of ownership.

You would also need to procure a multi-USB port adapter since there’s only one USB port available.

And you will need to invest in a large capacity micro-SD card to expand the available storage, especially if you love downloading and installing lots of apps or like watching movies on your tablet. A Surface Pen (pic above) is also available to provide you with writing and drawing capabilities, but since there aren’t any slots to put that pen in, the chances are high that you’ll either lose it or leave it at home. 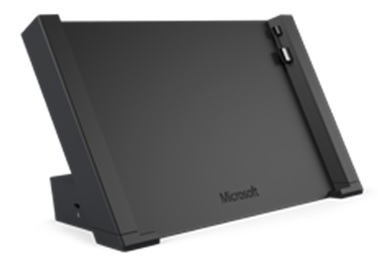 You could also invest in a US$199/ S$288 docking station (pic above) to turn your tablet into a full-fledged PC, but we recommend leaving the Surface 3 to do what it does best – a lightweight mobile computing device for accessing online services, cranking out a document, editing a PowerPoint or answering e-mail.

For the rest of the time, it’s a solid tablet for browsing the Web, watching videos, reading books and magazines, or playing games that are downloaded from the Windows Store.

The Surface 3 lacks the oomph of its older and larger sibling, but it can still handle your day-to-day computing tasks with aplomb.

What was surprising was, despite opening up at least 20 browser tabs, and executing about six ‘modern’ apps and four legacy applications at the same time while installing a triple-A PC game, a racing game like Gameloft’s Despicable Me still loaded and ran well.

However, games running on Steam didn’t perform so well, and it also struggled a little when we edited an animated, graphics-heavy PowerPoint file.

Generally though, we were satisfied with the performance, as it came across like a notebook PC that’s powered by an Intel Core i3 processor with an integrated graphics chip. Of course, for the same price, you can probably buy a notebook that’s more powerful than Surface 3, but what you won’t get is the flexibility, weight and portability of Microsoft’s latest entry.

We were able to eke out about eight to nine hours of battery life from the Surface 3 (with moderate use rather than heavy multi-tasking tests). It’s a fairly good result but not as impressive as the iPad.

The micro USB charging port helps tremendously, as we can also charge it using a high-capacity power bank, giving us the option to take this wherever we go for more than 10 hours and still not worry. The biggest competition to the Surface 3 isn’t coming from other brands like Asus and Lenovo, although they have 10.1-inch Windows tablets that come with a 2GB configuration at a lower price.

Rather, it comes from Microsoft in the form of the Surface Pro 3. Based on the capabilities, the weight difference is not too significant, and with a bit more investment you are getting a slightly larger but more powerful device.

However, if the size of the Pro 3 is unacceptable, then buying the Surface 3 is recommended, as long as you keep your expectations in check on its performance.

Compared to Apple’s tablet, we still prefer the iPad Air’s versatility and apps availability, if it is mainly used as a tablet.

However, if you’re going to use the Surface 3 mainly as a notebook PC, then it depends on your preference for the Windows platform – and there are many benefits of sticking with Windows and the free one-year subscription to Office 365.

As for enterprise suitability, the stylus and convenient keyboard cover may be useful for certain verticals like finance and retail, but Microsoft may need to produce a more robust version to be used out in the field. 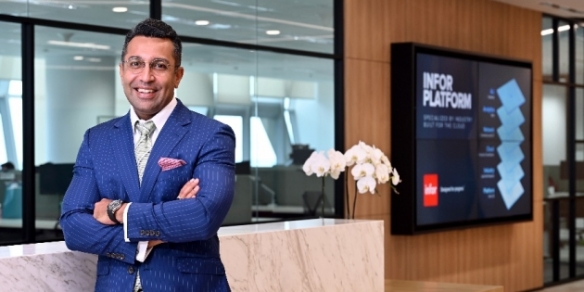