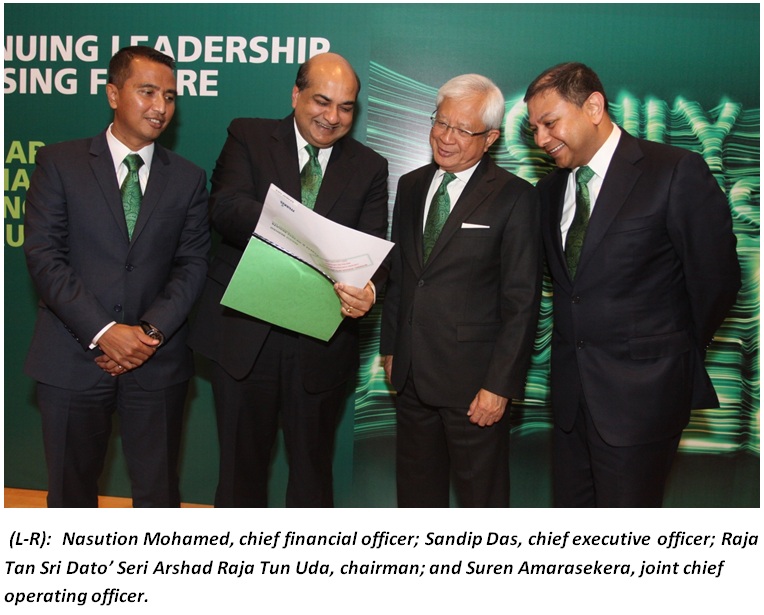 MAXIS Berhad recorded revenue of RM8.967 billion for the financial year ended Dec 31 2012, 1.9% up from the RM8.8 billion in 2011, on the back of higher revenue from all business segments, the company said in a statement.

Maxis claimed it maintained an industry-leading EBITDA (Earnings Before Interest, Tax, Depreciation and Amortization) margin at 48.6%, despite strong competition and aggressive market initiatives.

For the fourth quarter of 2012, Maxis said it led the market with 4.1% quarter-on-quarter revenue growth with non-voice revenue growing 5.1% and contributing 46.2% to total mobile revenue.

“2012 was a year of executing a balanced strategy to optimize core business while investing for the digital future,” said chief executive officer Sandip Das.

“While the market remains extremely competitive, it was pleasing to see the results of the efforts put in by the Maxis team to retain overall leadership in subscriber and revenue terms,” he said.

In line with the overall strategy of investing for the future, including network modernization, Maxis incurred RM803 million in capex (capital expenditure) in 2012 and launched 4G LTE (Fourth Generation Long-Term Evolution) services on Jan 1.

The investment has resulted in acceleration of depreciation of network equipment amounting to RM125 million, the company said in a statement.

This, together with other one-off asset write-offs of RM133 million, impacted Profit After Tax (PAT), ending 2012 at RM1.86 billion, which excluding these one-off items, results with a normalized PAT of RM2.049 billion.

EBITDA was stable at RM4.359 billion from a year ago.

Sandip said that Maxis continues to provide “the fastest and widest 3G network in the country” even as launched its 4G services.

“Throughout the year, we also introduced numerous innovative services including Loker (personal cloud storage), eBook, my Healthy Heart, and cloud computing for enterprise customers,” he added.

Maxis also partnered with Telekom Malaysia and expanded its high-speed broadband user base with both fiber and wireless based offerings. It also entered a strategic partnership with satellite TV services provider Astro.

“The strong ecosystem of partnerships we have built provides a strong platform to offer future innovative services for our customers,” said Sandip.

“In addition, we continued to seed the market with smart devices, building a solid base to drive future data services. Already, non-voice contributes 45.6% of our total mobile revenues, of which 64% comes from Internet and data services.”