NEWS ANALYSIS HTC Corp, once a smartphone powerhouse, is facing a near-complete reversal of its fortunes in a market that is seeing increasing competition from its rivals, analysts say.

It is struggling to make its products relevant and its prices attractive, and the Tauyuan, Taiwan-based smartphone maker’s share price was pummelled when it revealed its second quarter earnings on Aug 6.

Its share price tumbled by more than 10% – which is the daily trading limit in the Taiwan Stock Exchange – to NT$63 (US$2) from NT$71.20 the day before. Its share price dropped further to NT$54.50 on Aug 11, with analysts expecting it to slide even more.

At that time, HTC had about 10% of the global smartphone market share. It had a measly 1.4% share in the second quarter of 2015, according to data from Counterpoint Research.

The company had modest earnings over the past four quarters until June this year, when signs emerged of a slump amid intense competition from Chinese handset makers Xiaomi Inc and Huawei Technologies Co Ltd, as well as from other players such as AsusTek Computer Inc, Samsung Electronics Co Ltd and Apple Inc.

The Wall Street Journal (registration required) reported in June that HTC was expected to incur a net loss of between NT$7.95 billion (US$251 million) and NT$9.05 billion (US$285 million) for the quarter ending June 30.

Its forward guidance for the third quarter is also expected to be in the red. But what is significant is that the company has indicated that it would be recording a loss of between NT$5.51 and NT$5.85 per share, compared with the NT$1.17 per share loss estimated by analysts – about five times off the mark.

Correspondingly, its sales forecast given for the next quarter is as much as a whopping 48% below estimates, according to Bloomberg.

This prompted a sell-down of its shares and resulted in many analysts stating that they have all but given up hope on a recovery for HTC in the near term, something which has cast a pall over the once trailblazing smartphone maker.

The Financial Times quoted analyst firm Namura as saying that it does not see any clear evidence that HTC will be able to turn around in the near term, given its weak second quarter results and third quarter guidance.

“Although HTC stated that it is going to streamline its smartphone portfolio towards more premium segments and cut opex (operating expenditure) aggressively, we remain cautious and believe it is challenging for second-tier smartphone brands to remain competitive and turn a profit in a slow smartphone market.”

Citing a Morgan Stanley note to investors, The Journal added, “The window of opportunity is over – failure to turn the ‘best ever’ HTC One [the M9] into scale bodes ill for HTC’s long-term outlook.”

“Expectations have been reset,” wrote Credit Suisse’s Pauline Chen in a research note, also in The Journal.

But perhaps the greatest indictment of the company’s performance came from another Bloomberg report, which argued that a 56% plunge in HTC’s stock this year has effectively brought its market value near to cash-on-hand.

“A further 9.5% drop in its stock from the NT$63 close on Aug 6 would bring the two figures into alignment, signalling that investors put no value on the rest of the company.”

Citing analyst Calvin Huang of Sinopac Financial Holding Co, Bloomberg noted, “HTC’s cash is the only asset of value to shareholders. Most of the other assets shouldn’t be considered in their valuation because there’s more write-offs to come and the brand has no value.”

Analysts also see profit eluding HTC till the end of 2017, and none of the 22 analysts tracked by Bloomberg that updated their view in the past three months recommended investors to buy the stock. 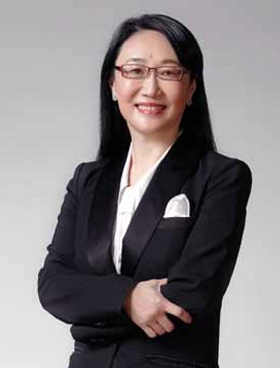 In a bid to desperately reverse its fortunes and engineer a turnaround, the company’s board replaced former chief executive officer (CEO) Peter Chou with founder and chairwoman Cher Wang (pic) in March.

Markets however did not welcome that move and HTC’s shares continued southwards from about NT$145 in March to less than NT$90 in June.

“The cuts will be across the board,” Chang said, adding that HTC was banking on selling high-end models in emerging smartphone markets such as India, where he said the company has a 20% market share of phones priced between US$250 and US$400.

Clement Teo, senior analyst with Forrester Research, said HTC’s Wang may have succeeded Chou but questioned whether she was the right person for that role, given that there needs to be a serious turnaround plan to reverse the company’s fortunes.

“Should they search for someone from outside the company? Sometimes, you’ll need an outsider who can drive the right decisions for the company, like how Xiaomi brought in Hugo Barra to help Xiaomi go global,” he told Digital News Asia (DNA) via email.

Teo argued that HTC has had poor marketing leadership and the company has seen a few CMOs (chief marketing officers) trying to retain consumers without a new product launch every cycle, to no avail.

Saying that HTC does not seem to have learnt from Samsung's Galaxy 5 debacle, he added, “The fortunes of Samsung repeats itself here with HTC One M9 – it looks the same even if things are different under the hood.

“Customers who invest in a new high-end product want difference; if not, they won’t bite.”

Neil Shah, research director at Counterpoint Research, told DNA via email that HTC’s ambitions in India, as outlined by Wang, have some merit but this will not change its situation that easily in the longer run.

According to data tracked by Counterpoint, HTC has been doing much better in India than elsewhere, with its market share in the US$250 to US$400 price band peaking at about 17%, capturing second spot behind Samsung in the second quarter.

“[The] HTC Desire 826 was its best-selling phone in that price band. However, playing in this segment doesn’t translate to overall success as this high-tier price-band contributes to just under 5% of the country’s total smartphone volumes.

“The real action is happening in sub-US$150 price band, but HTC’s share of that segment was only 1% in second quarter,” he said.

Shah said HTC’s growth in India could also be arrested by fast-growing Indian (Micromax) and Chinese (Xiaomi and Huawei) brands offering the same value in terms of specs and design, at much more affordable price-points.

Forrester’s Teo concurred, saying that HTC's competitors today – compared with three years ago – have grown, and these players offer more bang for the buck.

“HTC is squeezed at the top by Apple and Samsung, and from the middle by Xiaomi, Huawei and Asus,” he said.

Asked whether HTC could stem its share slide and reverse its fortunes, Counterpoint’s Shah said it would be an uphill task for HTC to regain its position.

It would need to revamp and consolidate its offerings with a consistent design language, and strike key partnerships with other industry players in the content and services space to improve the value proposition of its devices, he suggested.

“Being a pure hardware-only vendor won’t take HTC far enough,” he argued. “HTC should learn from another Taiwanese company, AsusTek, and how it’s making a comeback and scaling up with cutting-edge specs at highly affordable price-points.”

In the interim, Shah (pic) suggested that HTC raise its game and make itself attractive to others, focusing on building an IP (intellectual property) portfolio over the next couple of years and eventually maximising its valuation.

He said if this doesn’t work, a potential merger or being acquired is the only way out for the company, as it would make sense to merge with other Taiwanese companies such as Acer Inc or Asus.

However, Reuters reported that while rivals such as Asus have not ruled out such as move, HTC’s own Wang declared that it is out of the question.