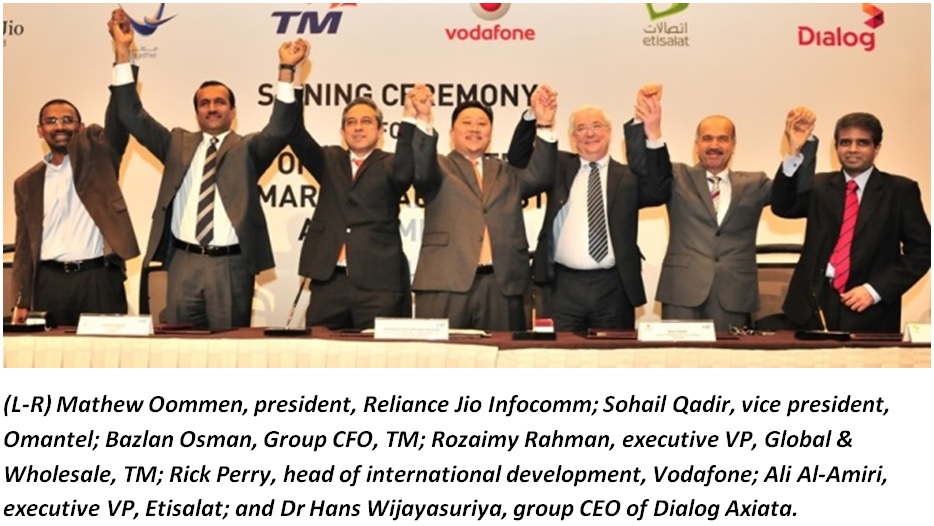 The new cable system would extend connectivity and network diversity in the region, TM said in a statement.

“This initiative undertaken by the consortium is part of the six partners’ continued commitment to invest in the development of IP (Internet Protocol) communications globally, and to extend broadband connectivity to a wider audience,” said TM group chief financial officer Bazlan Osman.

“The additional capacity will help to better prepare and mitigate any potential future congestion we may face,” he said. The submarine cable system, initiated and spearheaded by TM and the Vodafone Group, will link Malaysia (through Penang) and Singapore to the Middle East (Oman and United Arab Emirates), with connections reaching out to India (Mumbai and Chennai) and Sri Lanka.

BBG will also serve as an extraordinary opportunity for business growth as it will help supporting current and future high capacity requirements from the surrounding areas of the region as well as next-generation Internet applications, the company added.

With a total distance spanning approximately 8,000km, BBG is set to provide an alternative route to Europe for TM’s IP traffic. This diversity is essential especially in the earthquake prone zones in the Pacific Ocean Region and will also complement the other cable systems which TM is latched onto.

The construction of this cable system is a clear indication of the growing demand for bandwidth at the participating countries. The markets are expected to see strong growth with the continuous efforts in embracing the broadband technologies and infrastructure expansion, TM said.

The BBG cable system is designed to provide upgradable and transmission facilities by adopting the state-of-the-art 100Gbps technology. This cable system is expected to carry commercial traffic by end of 2014.

TM owns or leases capacity on more than 10 submarine cable systems, which span more than 60,000 fibre-route miles around the globe, including several submarine cable routes that the company uses to carry traffic between Asia-Pacific region and North American region.