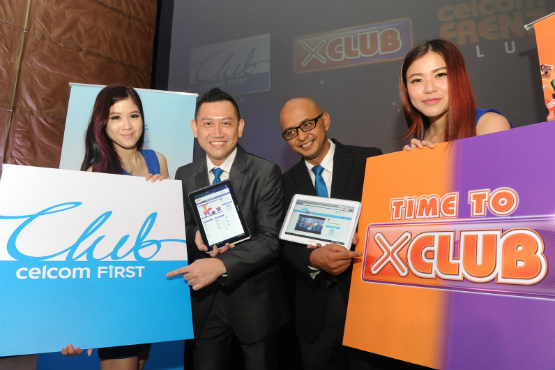 CELCOM Axiata Bhd, a mobile operator wholly-owned by Axiata Group Bhd, hopes to kill two birds with one stone with the launch of a series of loyalty programmes on April 9.

The loyalty programmes, comprising Club Celcom First, XClub and FRENZ Club, are aimed at lowering churn rate and increasing its engagement with customers. In other words, the company is hoping that its customers stay longer and spend more.

“Churn and customer engagement are the two main criteria of success for these programs,” chief marketing officer Zalman Aefendy Zainal Abidin said after unveiling the loyalty programmes in Kuala Lumpur.

He said that reducing churn rate isn’t the sole responsibility of loyalty programmes, as other components of customer experience such as customer service and quality of network also play a role.

While he declined to reveal the company’s churn rate, he claimed that it is “stable and not at alarming rates”.

“Nevertheless, we still need to improve our churn. There are fewer new customers out in the market. We need to do our best to keep them with us for as long as possible,” said Zalman.

With mobile penetration rate hitting saturation levels, competition amongst mobile operators is becoming more intense as they need to woo over their rivals’ customer base while keeping their existing base loyal.

As of Dec 31, 2013, Malaysia has more than 42.95 million mobile subscribers, comprising 35.31 million prepaid subscribers and 7.64 million postpaid subscribers. These numbers translate to a mobile penetration rate of 143.6%.

Over the next few years, Maxis Bhd, which has been the clear market leader for some time, will be intensively trying to revitalise its prepaid business, while DiGi.Com Bhd will be hoping to grow faster than its rivals.

Celcom chief executive officer Shazalli Ramly, during the company’s financial results announcement, warned that 2014 will be the “Year of Battles” and operators will be fighting hard for a piece of customers’ hearts and wallets.

Celcom's Zalman stressed the importance of creating “customer engagement” in the loyalty programmes.

“By engaging with customers better, we will be in position to understand them better, provide them with services that are more relevant to them and hopefully, we would also see a change in their usage behaviour which may result in higher revenue,” he said.

Zalman said that the company took about two years to develop the loyalty programmes, adding that it was made possible after the company initiated its IT transformation agenda.

“The programmes run on this NBA (Next Best Action) platform, which we got from IBM Unica,” he said, adding that the company hopes to see 25% of its 'entitled customers' sign up for the programmes.

Only Celcom customers who subscribe to the Celcom First, Xpax or Celcom FRENZ plans are eligible for the new loyalty programmes. They must also have been customers for at least six months to qualify. They also need to send YES to 22188 to get access to the 'clubs'.

“Not all of our postpaid customers are on Celcom First plans. Some of them are still on the old plans,” said Zalman.

On why the company did not want to automatically register its eligible customers into the programmes, he said that it is partly to comply with the Personal Data Protection Act, adding that the data obtained will not be shared with other parties.

“Also, when there’s conscious participation from the customers, they will be more engaged,” he claimed.

IBM unveils Watson breakthrough, Celcom gets on board