WITH the popular English Premier League (EPL) kicking off over the weekend, and other major European leagues, football fans are in footie heaven again – at least, those who subscribe to the premium package on Astro Malaysia.

Those who are not able to afford the package will have the usual complaints about a monopoly, though this is not true as Astro won the rights through competitive bidding.

The good news is that last month saw a new player enter the pay TV market in Malaysia. What will that mean for football fans in three years when the rights to the EPL and other leagues are up for grabs again remains to be seen, but competition in the space will be good for consumers. The new player in question is digital cable operator Asian Broadcasting Network (M) Sdn Bhd (ABN), which went live last month. In the first part of our conversation with its chief executive officer Sreedhar Subramaniam (pic), he shared that research conducted by Frost & Sullivan for ABN revealed an untapped market that was willing to pay less than US$9.15 (RM30) for TV content.

Hence ABNxcess (the product brand) offering its entry pack at RM29.90 for over 50 TV and radio channels.

Second, the Frost & Sullivan research showed that consumers still feel they are not getting enough choice.

This leaves someone like me, who has long felt there was already too much content on TV, feeling bemused. [And yet there is no-one offering the popular SyFy channel yet – ED].

But I am looking at this from a Malaysian-centric view, forgetting that there are over two million foreign workers in the country who would clearly like to watch TV from their homeland.

Meanwhile, a look at ABNxcess’ Facebook page shows there are also Malaysians who are keen on its offerings. Sreedhar highlights that many of the channels ABNxcess offers are new in Malaysia.

Call these your poorly- and under-served market segments. Business strategy dictates that in challenging an established market leader, one needs to find such market segments. A new entrant also needs to offer a differentiated product.

The differentiation comes from the technology that ABN is using, HFC (Hybrid Fibre Coaxial), which allows it to offer both Internet connectivity and TV channels over the same cable. And it is a big cable in terms of how much content it can carry to each household.

“The cable is designed to carry over one gigahertz of frequency. In the wireless world, this means mobile data, mobile phone services, TV, radio, microwave links, etc – all this bandwidth is sitting on our cable, dedicated for ABN use,” says Sreedhar.

This is why he likes to point out that the cable that passes into a customer’s home is ‘bigger’ than his backbone to receive content. Drive past his temporary network operations centre in Puchong, Kuala Lumpur and you will see an array of gleaming satellite dishes pointing skywards.

The cable that goes into your house will have more bandwidth than one of those dishes. And it is High Definition (HD) ready, which means consumers will not have to pay a premium for HD channels, likely to be a strong selling point to those who are price-conscious.

The biggest draw of this technology is the cost advantage it offers ABN.

“We don’t need to add bandwidth, no need to lease any transponders or send satellites into space to add capacity. We currently can transmit 200 channels and this will be 500 when we move to our permanent home, ABN Mediapolis, in Technology Park Malaysia, Bukit Jalil, in 2015,” says Sreedhar.

What all this means from a financial perspective is that ABN will be cashflow-positive when it hits 300,000 subscribers, says Sreedhar. He estimates this will happen in four years’ time.

“There is a saying in the cable industry, ‘pay as you grow’,” he says. What this means is that any future capex (capital expenditure) ABN ploughs in will likely be to satisfy the needs of customers who want its services in their neighbourhood.

He is coy about sharing how much has been invested thus far, merely saying “over RM100 million (US$30.5 million).”

And this includes the cost of content too. “We have invested wisely,” he says. To emphasise this point, he shares that each customer becomes profitable to ABN within the first 12 months of the 24-month contract signed.

And while the main shareholder and executive chairman of ABN, business tycoon K.K. Eswaran, has gone on record to say that the company has access to a RM500-million loan from Bank Pembangunan, there seems to be much scepticism over the company’s ability to have the financial wherewithal to stay in the game long enough to become a credible alternative to Astro for Malaysians.

Sreedhar, who was brought in initially to advise ABN on its strategy in 2011 “but it quickly became a very serious thing and I was appointed CEO on Sept 1, 2011,” seems quietly confident however.

“Having a commitment to RM500 million in loans is dependant on meeting various conditions to unlock the money. Are you sure you can meet those conditions?” Digital News Asia (DNA) asked him.

“No big deal,” was his response.

Acknowledging that “everybody is watching us,” Sreedhar, who first cut his teeth in the TV space as chief operating officer of ntv7 in the mid-2000s, will have a hectic four years ahead of him in reaching the targets set out.

One point that has caught the interest of the market is the shareholders of ABN. Eswaran holds 70%, while 10% is held by Admiral (Rtd) Mohd Anwar Mohd Nor via Mutu Pedoman Sdn Bhd and 20% by Mohamad Noor Abdul Rahim via Kurnia Mantap Sdn Bhd.

While Eswaran has no media and content experience, it has stuck industry observers that he has brought in as shareholders two others who have as much experience in the content game as him. 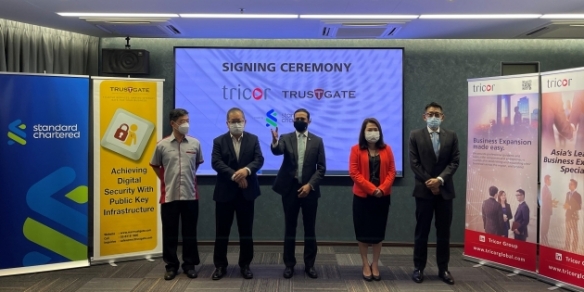