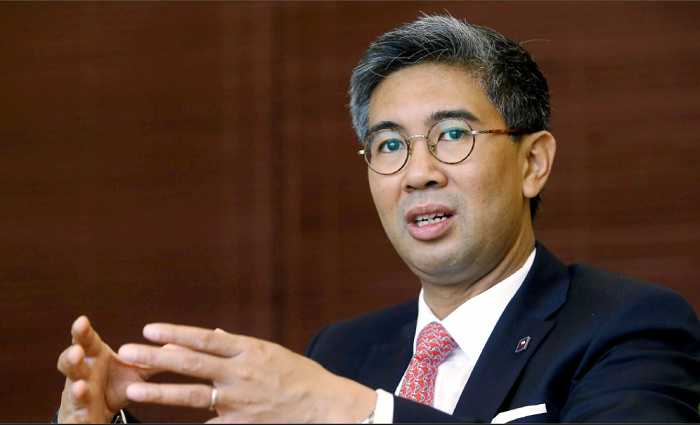 [Editor's Note: One of the stories of the year in Malaysia has been the controversy over the Malaysian government opting for a Single Wholesale Network approach to accelerate Malaysia's 5G rollout, which has gone nowhere - because there has been no rollout.

One would not think a critical infrastructure decision announced by the government nine months earlier (in Fec 2021) and which has seen very rapid progress (Malaysians can now enjoy 5G in Dec), would continue to draw criticsm. In this case the most recent came from no less a person than the Deputy Minister of Communications and Multimedia who complained in Parliament on 9 Dec that he/the ministry were left out of the loop over the 5G decision process. Jaw dropping accusation, indeed.

But a beautiful thing happened the next day. Finance Minister, Tengku Zafrul Aziz, took to facebook, and in a lengthy and detailed manner, laid out the timeline of events that transpired. As his explanation was in the national language of Bahasa Malaysia, DNA has translated it to English for readers to consume and have an appreciation for what really happened in terms of influencing Malaysia's 5G approach. Very minor edits were made and the parts in bold are made by DNA to emphasise some key points for readers.]

I would like to shed some light on the statement made by the Deputy Minister of Communications and Multimedia, YB Datuk Zahidi Zainul Abidin during the Dewan Rakyat session yesterday, 9th of December 2021. Many inaccurate statements have also been reported by the media, thus I would like to provide clarification so that there is no more confusion about this matter. He had stated that there was no consultation between the Ministry of Finance (MOF) and the Ministry of Communications and Multimedia (KKMM) on the appointment of Digital National Berhad (DNB) as the implementer of 5G network and infrastructure through the Single Wholesale Network (SWN) model.⠀

The fact is, over the years, the MOF has been working closely with KKMM and its regulatory agency, the Malaysian Communications and Multimedia Commission (MCMC), in all efforts to improve digital connectivity in Malaysia. I have always communicated with the Ministers of KKMM, in the past and present, and I will continue to work closely with the Minister of KKMM for the well-being of our country's digital economy. In my humble opinion, KKMM has done a great job in implementing the nation’s connectivity project, JENDELA, and MOF will always support KKMM’s objective to realize the nation’s MyDigital mandate for socio-economic inclusivity.

Therefore, based on the efforts and discussions held in the Cabinet and between the MOF and KKMM over the years, I would like to make it clear that: ⠀

a.) The proposal to use the SWN model for 5G networks, as well as KKMM's involvement began in 2019 to accelerate the launch of 5G in Malaysia which was considered to be lagging behind countries like Singapore, Thailand, Vietnam, Indonesia and the Philippines. They had all successfully launched their 5G networks as early as 2019.⠀

b.) In terms of the design and construction of the 5G network implemented by Ericsson, one of the efforts to accelerate the implementation of 5G is by combining both tower rental and fiber leasing. Thus, the question of DNB's capacity and capability in providing this digital backbone does not arise because the development of this 5G network will adopt the existing infrastructure. [owned by the various telco players.]

c.) In terms of the cost of leasing of the 5G spectrum, the claim that "DNB will sell to telcos at double the profit" is also unfounded. I have already explained to Parliament on the 25th of November 2021 that DNB will charge less than 20 sen per gigabit (GB) for 5G to the respective telcos. In comparison, this is much cheaper than the current additional cost per GB of 4G by the telcos which is at a rate of RM0.45 – RM0.55 sen per GB.

d.) In addition, through the SWN model, each telco is projected to pay DNB between RM3.5 billion to RM4.0 billion over the next 10 years (much lower than the estimated RM7.5 billion major upgrade of the 4G network to 5G in Malaysia). This means the Telcos will get a savings of more than 50%, and those savings can be used to reduce the price of services charged to customers or consumers. At the same time, they can also pay more dividends to their respective shareholders ⠀

e.) The cost of implementing this 5G network will be financed through a combination of deferred financing to vendors, trade financing and working capital, as well as Sukuk programs that is to be issued in the national capital market. It will also not involve any guarantees or funding from the Government, particularly indirectly, or via off-balance sheets, as claimed by some. DNB will obtain the financing through financial services such as banks, and this will be repaid through sales proceeds generated from the wholesale capacity.

f.) Many parties have cited the failure of the SWN model in other countries. However, I would like to emphasize that DNB has been carefully established and is staffed by experienced veteran experts in the telecommunications industry. The Government’s ability through the DNB needs to be given a chance, because one day, we will be able to prove that their assumptions are inaccurate, and Malaysia can be successful in implementing this model for 5G.

The best current example is PETRONAS. Established since August 1974 and wholly owned by the Government, Petronas has been entrusted with the responsibility of developing and adding value to the country's oil and gas resources. Today, Petronas has grown into an oil and gas company with business interests in more than 50 countries. Apart from Petronas, we can also see the success of Government-owned companies such as Tenaga Nasional Bhd and Telekom Malaysia that have grown and expanded successfully both locally, and abroad.

g.) The assumption that the interests of Bumiputra contractors will be side-lined in the 5G projects is also unfounded. This is because one of the implementation conditions of this 5G project is the need to utilize at least 60% of Bumiputera contractors in the next 10 years, as agreed by the Bumiputra Prosperity Council chaired by the Prime Minister at a meeting on 17th November 2021.

To offer some background information, the following is the timeline for the implementation of 5G in Malaysia so far:

1.) December 2019: MCMC, under KKMM, published the National 5G Special Task Force Report and the Final Report on Spectrum Allocation for Mobile Broadband Services. These reports emphasize, among others, the need for appropriate spectrum planning to provide 5G services as early as possible for the development of a robust Malaysian digital economy. The report also found that the additional cost of upgrading just one 4G network in Malaysia would cost about RM7.5 billion, while the collective use of the 5G networks by the four major mobile network operators would likely cost more than RM30 billion.

At the time, the Final Report on Spectrum Allocation for Mobile Broadband had recommended that a single entity be formed by a conglomerate of 5G consortium consisting of telcos, rather than awarding the 5G spectrum individually. However, due to differences of interest among telcos, efforts to share networks to save costs and roll out the 5G did not go as planned.

2.) 3rd of February 2021: The Cabinet during its meeting was informed and noted that a Special Purpose Vehicle (SPV) company wholly owned by the Government will be appointed to          implement a single 5G network infrastructure nationwide. This SPV will provide wholesale capacity and access to licensed telecommunications companies. The return to the SPV is based on a cost recovery model to ensure that the 5G service charges or cost to consumers are kept low.

3.) 19 February 2021: At the launch ceremony of the Malaysian Digital Economy Blueprint (MyDigital), the Government announced the implementation of 5G by a Government-owned SPV to provide 5G network services, and by the end of 2021, 5G technology will begin to be enjoyed by the people in stages. Several Ministries including KKMM were also involved in that event.

4.) 1st March 2021: The Ministry of Finance announced the establishment of DNB as the SWN 5G operator that is based on a cost recovery model which is supply-led and not based on profit maximization model. This cost recovery model is a priority so that the implementation of 5G networks can be accelerated at a low cost. This will ensure that the cost of 5G usage by citizens and businesses is affordable. This supply -driven model is also important to ensure that 5G services can be enjoyed by people living in rural areas.

The fact is, even today, 4G services are still not being enjoyed by many Malaysians in rural areas as these areas are not considered profitable for telecommunication companies. I believe, the case of Adik Veveonah Mosibin published June 2020, as well as the case of a few graduate  students who had to climb a 20 meter high hill in Kelantan to participate in an online class that was reported in November 2020 is close to the hearts of all Malaysian families. In fact, the Government has had to provide additional expenditure amounting to RM28 billion under the National Digital Network Plan (JENDELA) initiative to link services to areas where MNO have failed to provide coverage. Telecommunication companies have taken over seven years to achieve 82.2% coverage for 4G in populated areas. On the other hand, DNB is targeting for over 80% of 5G network coverage to populated areas by 2024.

5.) 31st May 2021: KKMM issued a Ministerial Directive under the Communications and Multimedia Act 1998. This Ministerial Directive touched on the provision of 5G infrastructure and network, and stated that the Malaysian Government has decided to accelerate the implementation of 5G infrastructure and network in Malaysia to realize the potential of 5G.⠀

6.) 1st June 2021: DNB was licensed under the Communications and Multimedia Act 1998 [Act 588] and placed under the regulation of MCMC. DNB has been mandated by the Government to implement and develop the sole 5G network nationwide. The Government is aware of the issues and challenges of the SWN models in other countries, and has taken steps to ensure that any similar shortcomings or weaknesses does not occur in Malaysia, especially in terms of governance by the MCMC and implementation guidelines that ensure more efficient, fast and cost effective infrastructure provision for large-scale economic benefits. The purpose of these measures include the following:

7.) 1st July 2021: The DNB tender which commenced on the 7th of April 2021 ended on the 1st of July 2021. The weightage for the main components of the tender in terms of percentage were Commercial (30%); Technical & Capability (55%) and Socioeconomic Benefits (15%). The tender process was carried out transparently by professional consultants Ernst & Young. A tender evaluation team comprising over 50 experienced experts and professionals from 10 different countries has been formed to evaluate the tenders.

Of the eight Network Equipment Providers (NEPs) who were invited to participate in the Request for Proposal (RFP), only four (4) NEPs submitted bids, namely Ericsson, FiberHome, Nokia and ZTE. Based on the tender evaluation, Ericsson (Malaysia) Sdn Bhd (Ericsson) was appointed as the NEP because the total charge offered was RM700 million lower than that offered by the second lowest bidder. This tender process is also implemented transparently and collectively through negotiations with telecommunications companies including in the aspect of network design.

I hope this explanation will put an end to all the confusion about the SWN model being used along with the obvious benefits of it being an obvious win-win solution for all parties. Most importantly, the Government will continue to ensure the inclusiveness of 5G network coverage, its speedy implementation and affordable pricing for Keluarga Malaysia, be it for individuals or business.