THE Indonesian Government believes that the republic can become the largest ‘digital community’ in the world and has kicked off a number of initiatives to make this happen, and is even considering relaxing investment regulations to boost the startup ecosystem.

Indonesia aims to create 1,000 startups by 2020, an effort that comes in the wake of President Joko ‘Jokowi’ Widodo’s first official visit to the United States last month.

While Jokowi had to cut short his visit, the Indonesia delegation led by Minister for Communications and Information Technology Rudiantara continued on to Silicon Valley, where meetings were held with technology giants as well as members of the startup ecosystem there.

Bambang Hery Tjahjono, Director General of Informatics Applications at the Ministry of Communications and Information Technology, told Digital News Asia (DNA) these new startups the Government is envisioning would not only be for-profit ventures, but also social enterprises that would look into solving societal problems.

These startups could contribute up to 1% to Indonesia’s GDP (Gross Domestic Product), which was an estimated US$870 billion in 2014, and also create around five million new jobs.

To hit this 1,000-startup target, the Government is looking into legislation that would enable this vision, including easing the company registration rules for startups.

Rudiantara said the Government is considering allowing startups to merely register with startup associations such as the Indonesia E-Commerce Association (idEA), instead of applying for the usual business licence.

He said the Government is still looking at how to structure such a scheme, which would require the startup to be accredited with the association.

To ease funding funnels and allow more foreign investment in domestic startups, the Government is also looking into revising its Information and Telematics laws, especially to revoke articles on the ‘negative investment list’ when it comes to startups – although it wants to restrict this to the bigger, more established startups.

The ‘negative investment list,’ known by its Bahasa Indonesia acronym DNI, specifies the sectors of the Indonesian economy in which foreign investment is prohibited or limited. Currently, the startup and e-commerce sectors are subject to such limitations.

​The Indonesian Government first introduced DNI in 1998, but updates it every few years.

“We have to look at the specific segment – there are startups, SMEs (small and medium enterprises) and established companies such as Tokopedia and Go-Jek all playing in the space,” Rudiantara said.

“Certainly, the financial need of each of them is going to be different,” he told DNA in a meeting at his office.

To ease Indonesia’s way into the proposed regime, the Government’s first priority is on the more established startups with valuations in excess of US$1 billion.

Rudiantara believes that these potential unicorns would be able to attract more foreign investments.

“In addition to money, the technology and expertise of foreign investors could be of great benefit to our startups,” he said.​

Restricting foreign investment to these kinds of startups would also allow the smaller startups to be first nurtured and grown domestically before being opened up to foreign capital, he argued.

“For SMEs and new startups, we have to allow them to establish themselves first,” he added. 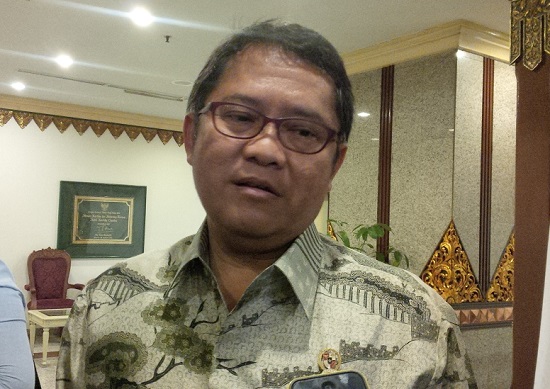 In terms of the ‘1,000 startups’ vision, the Indonesian Government is targeting for at least 11 of them to become “successful” in terms of a large user base, although Rudiantara (pic above) did not give a specific number.

Achieving this target would require about US$1 billion in investments – unfortunately, the Government’s hands are tied here, he declared.

“There is no allocation in the state budget for startups – we will have to encourage conglomerates to invest and support startups,” he said.

But while the central government has no money for such a programme, local governments are willing to support the idea.

For example, Jakarta Governor Basuki ‘Ahok’ Tjahaja Purnama has said his city is building a co-working space to support creative industries, including financially.

“This space can be used for incubation programmes, and the Jakarta administration is willing to invest in promising startups, either from our own budget or via loans from Bank DKI,” he said.

The city administration itself will arrange for successful local entrepreneurs to provide guidance and mentorship to these startups.

The Jakarta co-working space is expected to be completed before the end of the year. Meanwhile, the Indonesian Government’s ambition to create 1,000 startups by 2020 was hailed by venture capital firm Ideosource.

Its cofounder and managing partner Andi Boediman (pic) said Ideosource was willing and ready to cooperate.

“I have not seen details of the programme yet, but certainly we welcome it. If the Government invites us to participate, we would be pleased to do so,” he told DNA in Jakarta.

Andi did his math, saying that to create 1,000 qualified startups, the Government would need to plant “10,000 seeds.”

From the 1,000 startups, 10 ‘unicorns’ – a startup whose valuation is US$1 billion or more – could be created in Indonesia, he added.

She said XL Axiata, the Indonesian subsidiary of Kuala Lumpur-based regional telco group Axiata Bhd, was willing to cooperate with startups in this area.

Beyond what venture capital Axiata Group can muster, XL Axiata itself could support these startups “by developing app stores for them to market their products,” she said.