Heading out to SEA

While it’s clear that AWS is expanding its alliances to include a broader ecosystem of partners beyond just software developers, and increasing the regions where it sets up its data centres, South-East Asia remains a relatively small footprint for AWS compared with the United States, Europe and Asian powerhouses like China and Japan.

Asked whether it has plans to put more data centres in the region like its latest in Germany, AWS’ Jassy said he believed that in the fullness of time, every country in every AWS region where it has a data centre will be adequately served – but this would take time to happen.

He acknowledged that AWS has thousands of customers in the South-East Asia region being served out from its Singapore data centre, but did not commit to whether more such centres would be opened in the near future. Currently, aside from Japan, it has a limited preview data centre in China. According to Rick Harshman (pic), head of Asean for AWS, the establishment of new regions for data centres comes down to what the customers need and what they are looking for.

Conceding that it would not be possible to set up a data centre in every country, Harshman said not all customers need their data to be in-country except for the most stringent of cases, as with the case of the financial sector.

Speaking on the sidelines of re:Invent, Harshman said AWS continues to work with all stakeholders including regulatory authorities and customers to educate them on the different facets of public cloud data sovereignty, security and privacy.

“For the most regulated industries such as financial services, we always encourage our customers to encrypt their data and only they would hold the encryption/ decryption keys,” he said.

“Also, our policy is very clear: Should there be a request to view data on our data centre assuming all the court-issued warrants are properly administered, we would inform the customers concerned that requests have been made by the authorities,” he added.

In the final analysis, AWS’s ambitions for the enterprise for the most part had been clearly articulated at re:Invent, and while quite a few analysts believe that the cloud player is still the overall leader, the competitive landscape will continue to change in the coming year since AWS is clearly not the only public cloud game in town.

Forrester Research believes this year’s re:Invent did not witness any slowdown in AWS’ pace of innovation, and that other cloud providers – save for Microsoft, Google and a few others – will struggle to match AWS’ capabilities, and that market consolidation is likely to happen.

“AWS’s strategy is to offer services that provide ‘just enough’ features to make the services easier to use,” read a Forrester research note (subscription required).

“The company offers customers a pricing in an order of magnitude cheaper than traditional enterprise software alternatives, then quickly adds more sophisticated features at an additional cost,” it noted.

TBR’s Mirandi (pic) believes that pricing could play an important part in the coming year as AWS partners, customers and evaluators are beginning to more seriously consider other solutions, namely those from IBM SoftLayer, Google and Microsoft, as competition heats up.

Also in the mix is virtualisation leader VMware Inc, which recently launched a new version of its hybrid cloud offering.

Mirandi argues that AWS is also beginning to lag behind in the platform-as-a-service (PaaS) space compared with competitors such as Google and Salesforce.com.

“AWS Elastic Beanstalk, a free service, acts more as a deployment and management layer than a developer-centric platform on which to build applications.

“It has worked well to date, attracting thousands of developers; however, it remains focused on the hardcore developer market, whereas other platforms are vastly simplifying development to grow among citizen developers,” she said.

She also said Oracle can’t be counted out and remains a force to reckon with, although it had been late to market with its full cloud stack.

“Oracle’s ability to move any database to the cloud by simply pushing a button and the customers’ ability to choose public or private deployments, all marketed with the regular tenacity Oracle exudes when confronting threatening vendors, are expected to challenge AWS’ growth,” said Mirandi 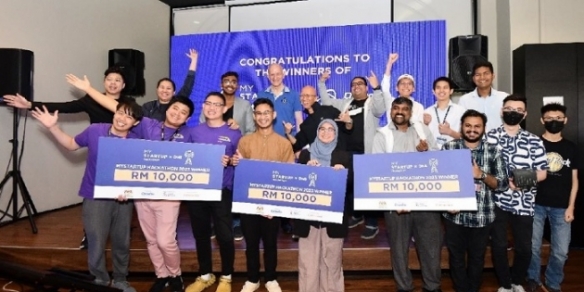