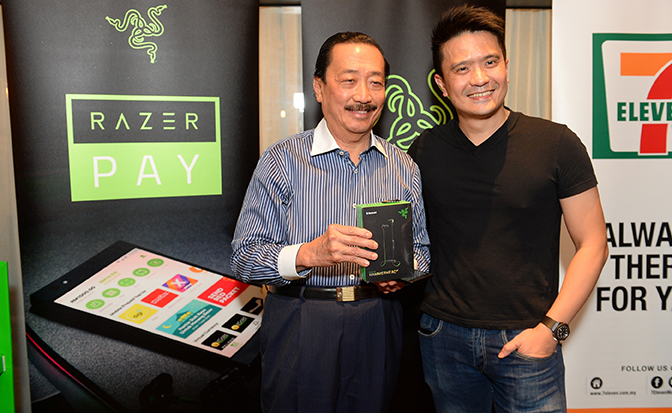 SINGAPORE-based gaming tech company Razer has thrown its hat into the ring with the introduction of Razer Pay in Malaysia.

This latest endeavour by Razer comes on the back of its acquisition of MOL Global on May 10, 2018 for US$61million (RM246.89 million), in which its partner Berjaya Corporation Bhd was the majority shareholder.

What gives Razer Pay a shot in the arm is the new e-wallet’s access to over 6,000 major retail and F&B outlets owned by Berjaya Corporation.

Among the stores users can use the new e-wallet at are 7-Eleven, Starbucks, Singer, Cosway, Wendy’s, Krispy Kreme, 99 Speedmart and Thunder Match Technology Sdn Bhd.

Razer co-founder and chief executive officer Tan Min Liang described Razer Pay as Razer and Berjaya Corporation’s bid to push for a cashless economy by introducing an e-wallet that is targeted at youth and millennials.

Essentially, Tan broke Razer Pay down to three core features which are the ability to easily top up, quick transfer of funds and the ability to pay both offline and online. The app is available for download on Apple’s App Store and Google Play.

To add funds to a Razer Pay account, users can visit any 7-Eleven store in Malaysia at any time to buy a Razer Pay top-up PIN. Alternatively, they can use their online banking account, that includes AmBank, Bank Islam, CIMB, Hong Leong Bank, Maybank and Public Bank and RHB Bank, to add funds.

Razer Pay is also said to support peer-to-peer transfers between family and friends, that they claim enables them to transfer money from their e-wallet to a friendly party’s bank account.

According to Razer software business unit director Ian Lim, Razer Pay will prompt users for additional information to verify their identity as part of its Know your customer (KYC) compliance before such transfers can take place.

Lim adds that users of Razer Pay would be able to load their wallets with up to RM1,500 in value.

Beyond paying for goods at physical outlets, Razer Pay can also be used for online transactions on popular services such as zGold MOLPoints, Steam Wallet, PlayStation Store, Spotify and iFlix. Prepaid customers can also choose to top up their accounts using Razer Pay on all major telcos: U Mobile, Digi, Maxis and Celcom.

As a partner to Razer Pay, Berjaya Corporation has pledged to donate up to RM5 million to the national Tabung Harapan Malaysia fund.

The fund was set up by the Finance Ministry of Malaysia on May 30 as a crowdfunding initiative to reduce the country’s national debt.

From July 4 to Aug 30, Berjaya Corporation has committed to donating RM10 with each first use of the Razer Pay wallet at participating Berjaya outlets, subject to terms and conditions.

Adding to that, to celebrate the launch of Razer Pay, every new user in Malaysia will receive RM10 bonus credits when they sign up in the Razer Pay app from July 4 to Sept 30.

Malaysia is but the first country Razer has launched Razer Pay in and there is little doubt that Razer will want to bring the solution to its home ground of Singapore.

The company outlined that it intends to extend the e-wallet to the rest of Southeast Asia under an aggressive expansion plan but declined to comment on the timeline.

However, if there is a hint of things to come, Razer and telco Singtel are coming together to create the largest e-payment network in Southeast Asia.

In a report from The Straits Times, it was mentioned that the two companies plan to link their respective e-payment systems to create an interoperable network that allows credit from one system to be accepted in the other.