The Universiti Teknologi Malaysia (UTM) Chair of School of Computing in the Faculty of Engineering is specifically referring to the productive relationship between academia and industry, courtesy of the Premier Digital Tech Institutions (PDTI) initiative.

It was only in June 2019 that it was announced that the PDTI pilot had proved successful enough to warrant a continued rollout. Its objective: To bridge the gap between universities and companies in order to produce a more employable graduate, specifically with an eye on the digital economy.

Eleven universities and five polytechnics are included in the initiative, based on criteria that they provide a conducive learning ecosystem that includes: Student employability; Industry experience of staff; Mentoring; Robustness of final year projects; Research linkages with industry and; Career placement services. Certainly, from a number’s perspective, the PDTI initiative has been impactful. More than 25,000 students have enrolled in digital tech courses in 2019, an increase of almost 40% compared to 2017. An even more important data point is the fact that the average graduate employment rate was 95%. It was 88% before the introduction of the PDTI.

"We started with Computer Science & IT faculties as those provide the foundational knowledge required for most digital tech companies” explains Dr Sumitra Nair (pic, left), MDEC’s vice president for Digital Talent Development. "However, as Digital Tech became  increasingly embedded across more economic sectors, we realised the need to expand our focus horizontally to more faculties."

Not only is digital tech now broadened into non-digital faculties like Engineering, Business, and Economics, but the level of applied knowledge called for has also increased. "Demand for skill-based graduates with Digital Tech expertise has also prompted us to commence efforts to work with Technical and Vocational Education and Training (TVET) institutions," adds Sumitra. The best proof of this is in LinkedIN’s Emerging Jobs Report Malaysia 2020 where all of the most promising jobs of today and the future have a strong tech element to them. Even in construction, one of the key job openings are for BIM (Building Information Modelling) Specialists. Meanwhile, Wan Mohd Nasir (pic, right) shares that each year, UTM organises an Industry Advisory Panel (IAP). "We get feedback from them to improve our curriculum and make students more relevant to industry," he explains.

One major outcome is the introduction of work-based learning (WBL) "We make sure that the students work closely with the real problems from industry," he adds, with projects supplied by the companies they collaborate with.

The other is industry-based training with industry giving talks, three times a year with some courses having a module where students will make a presentation to a panel of industry partners.

Ng Sang Beng, the CEO of Aemulus, a Penang-based listed semiconductor components company, who has been actively involved in the PDTI initiative, is a big advocate of giving students exposure to real-world situations, to the point that he wants greater, not less, involvement. “Universities should consider a longer period of internship,” he said, “Students can receive training on the latest technologies, (and ) with that, they can bring these skills to their first employment.”

Ng even suggests that academics play a more engaged role. “It would be best to have lecturers visit during the internship as this will allow the academics to understand further on industry's requirements,” he says. 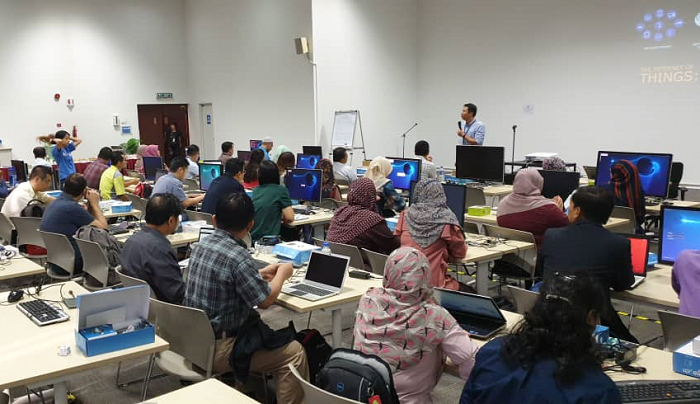 Keeping faculty on the cutting edge

Ng makes an important about academic involvement – the ones who mould, guide and sharpen students. And, MDEC is all in. In fact, this year MDEC is working with eight industry partners to upskill another 200 PDTI lecturers, on top of the 240 who have benefited since 2017. The focus areas represent the most relevant topics today, including Data Science, AI, Cybersecurity, Networking, Cloud Management, Databases, and Java.

"It is very important for the teaching staff to keep themselves abreast with the latest technologies and trends in the industry," agrees Dr Goh Hui Ngo, Multimedia University (MMU) Dean for the Faculty of Computing and Informatics. "We would like to minimise the gap and set industry expectations with the students. (For example), in 2018 and 2019 we sent staff to IBM and MDEC,” she said. “This is an important activity to enable us in developing future-proof academic programmes that meet the market needs.” "It is very important to us that we don't just cover the skills but make sure the students understand why and how they are important," concurs Ng Shu Min (pic, left), HELP University, Head of School of ICT. "We are constantly asking students to attend extra workshops and training and guest lectures too, but I think they will only appreciate it later!"

"I would say a graduate is "industry-ready" if he or she has been able to see a technical project through from start to finish, can communicate ideas well in reports and presentations, is keen to learn and not afraid to ask questions."

This sort of collaboration requires dedication and tight cooperation from all those involved, with Shu Min acknowledging that, "MDEC is very good at creating opportunities for us to collaborate with industry."

As a result, HELP often receives requests from industry partners for interns. “We have had very good feedback from internship supervisors with 'repeat' requests from companies for our graduates,” she says with communications skills, adaptability and work ethic being singled out by employers.

A balance between academia and industry

As much as academia wants to see students come out job-ready, a balance needs to be struck. "Sometimes industry expects our students to be fully equipped with the required specific knowledge and skills, although the students are only in year 2 or 3 of their study," says Wan Mohd Nasir.

Better expectation management between parties is needed. "We overcame this by engaging industry through a series of workshops and discussions. This approach has helped. For example, we’ve simplified our student assessment tools, which were too academic and lengthy for the industry," he admits.

Nevertheless, while academia has the final say on what goes on in the classroom, the PDTI are always open to new ideas, especially if it improves graduate employability by bridging theory to the practical.

The single most important metric of the PDTI, graduate employability and relevance in the digital economy has certainly improved. Wan Mohd Nasir confirms that job placement has risen from 88% to 95% at UTM, with many instances of students securing jobs even before graduating. Other PDTIs even report of 100% graduate employability.

UTM graduates have found jobs quite easily, mostly as application consultants and developers with the most popular post being software engineers. Employers including high-profile ones such as Intel, Top Glove, DHL, Maybank, Maxis, Schlumberger, Dyson, Forest Interactive, Heitech Padu, and Aemulus.

Further strengthening career prospects for students, the Career Development Centre Club (CDCC) was launched in 2017, initially with 13 PDTIs. The objective is to share best practices in strengthening the career readiness and employability among students and graduates. Most CDCC members of staff are certified by the National Career Development Association (NCDA). It has now expanded to include non-PDTIs as well with 29 members (including 5 polytechnics). Keeping an eye on the curve and offering microcredits

Apart from satisfying the volume of demand, the challenge upon PDTIs is to also deliver depth. This is where the Industry Competency Centres (ICCs) and Centres of Excellence (CoE) come into play with their focus on key industry 4.0 areas such as Big Data Analytics, Blockchain, AI, Autonomous Robotic, IoT, Cybersecurity, AR and Simulation.

Funding for some of these centres are via the MOE-MITI Industry4WRD initiative, while two others are being funded by MDEC.

"The objective is for talent development and technology propagation. In terms of exposure, the centre team members have been engaged as industrial consultants in various capacities," MMU’s Goh explains.

Examples of collaboration include one with the Ministry of Health where data analytics is being used to track Covid-19 cases in Selangor. Other companies involved in other partnerships include AirAsia, Australian-based property leader, REA Group and Hitachi EBWorx.

Now that the link between academia and industry is beginning to show dividends, some believe that more should be done to encourage students to foster similar closer relationships.

"IT students need to be more outgoing and build friendships and networks," observes Shu Min. "We plan to provide our students more opportunities for work-based learning, and plan to start involving them in industry projects during their first year at university."

"We also have a work-based learning option where students can spend their entire third and final year placed in industry."

And as success begets success, there is a growing realisation that getting digital skills adds a shine to whatever foundation you may already have. "Students and parents nowadays are looking for more flexibility in education, so as to be relevant to industry," says MMU’s Goh.

Recognising this, together with a softening job market, Sumitra points to a scheme from MDEC to help "top-up" skills. "We are working closely with PDTIs on various industry collaborations including the introduction of micro credentials to ensure students have industry certifications before they graduate.”

As to what’s next for the PDTIs, according to MDEC, since the model has proven to be successful, they are exploring possibilities to expand it to more universities and TVET institutions across the country.