(Originally published March 29, 2013)
No 2 of our top 10 most-read stories of 2013 is also one of three GE13-related stories to make it into the list, which just goes to show just how much Malaysians were starved for news about the country’s 13th general election.

It was a straight news piece about how the people of Malaysia could get even more news, but having click-bait like ‘Google’ in the heading probably helped too, as was the fact that Digital News Asia (DNA) was, IIRC, the first news portal to run the story. – A. Asohan 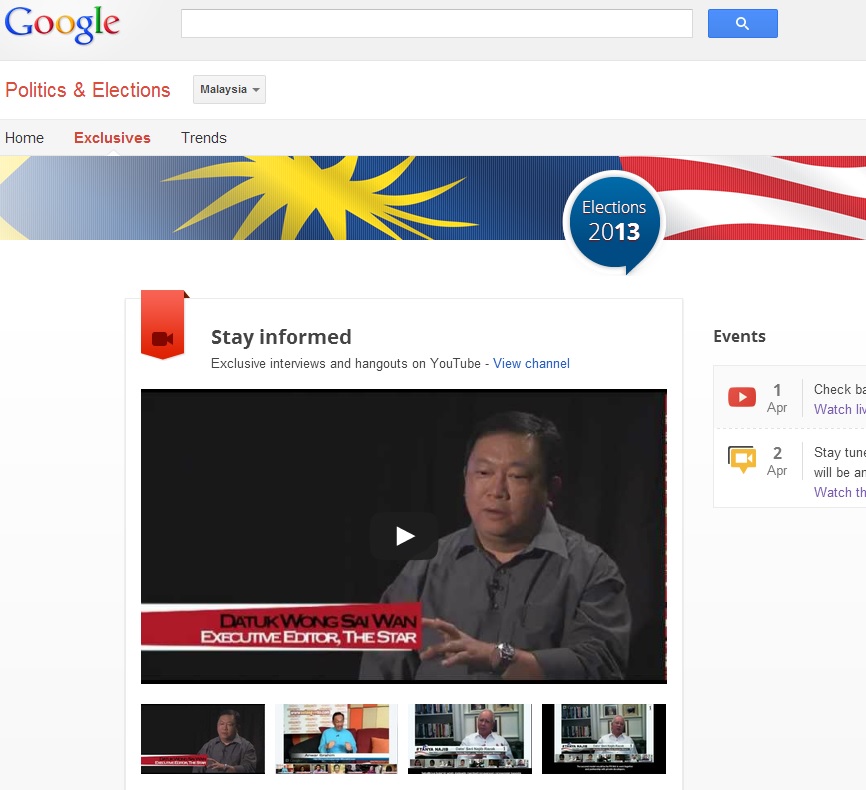 GOOGLE Inc has launched a dedicated page for Malaysia’s looming general election, the first such full-fledged election page for a South-East Asian country.

While Prime Minister Datuk Seri Najib Tun Razak has yet to dissolve Parliament and name a date for polling, many politicians “have already started unofficially campaigning online,” said Zeffri Yusof, head of communications and public affairs at Google Malaysia.

“A lot of campaigning is already happening on YouTube, and all the major political parties have their own channels already,” he said at a media briefing in Kuala Lumpur on March 27.

The Malaysian General Election page, which officially went live at noon (March 29), will help voters stay informed in the run-up to GE13, Google said. It will remain active after the election as a general resource hub for all election- and political-related content on Malaysia.

The election website features the latest elections-related news and search trends, along with links to the major political parties’ websites and YouTube channels. Users will be able to search for real-time election information within the website and tap into voter information resources compiled from various sources.

These sources include select media outlets like The Star, Media Rakyat and Harian Metro as well as non-governmental organizations like UndiMalaysia, which aims to encourage youths to vote, and MyConsti, an initiative by the Bar Council's Constitutional Law Committee to help Malaysian citizens understand the Federal Constitution and their rights.

Goh Lih Shiun, head of public policy and government relations at Google Malaysia, said that Malaysians and journalists also could make use of aggregated searches and trends for their own analyses.

Users can also pick out quick links to, for example, “follow the campaign on YouTube,” he said, adding that most of the content came from its partners above, while others bits were sources out by the Google itself.

Google will also be organizing Google Hangouts when the election campaign officially kicks off, and hopes it will be able to air debates between candidates, depending on their willingness, the company said.

The Google Malaysia team has been working on the site with the help of the sources above since late last year, Zeffri said. The company is open to working with any parties, NGOs and media which can help build up its G13 page, he added.

When asked why the Election Commission (EC) wasn’t on its page, he said, “We have reached out to the EC, and will continue to do so.”

“This is all in line with our founders’ vision to make information universally accessible; we want to make sure Malaysians have access to all the information available to them in order to help them make a well-informed decision on election day,” he added.

Malaysia follows the Westminster system, which gives the incumbent the advantage of naming an election date. The Malaysian rakyat (citizenry) has been on tenterhooks since the fourth quarter of last year, expecting the Prime Minister to call for elections at any time. Many pundits had named dates, but were proven wrong.

This coming general election, Malaysia’s 13th since Independence, is expected to be the most closely-fought. Leaders from Pakatan Rakyat, the Opposition alliance, have said they expect GE13 to be the “dirtiest” election ever.

In GE12 in 2008, the ruling coalition Barisan Nasional lost its traditional two-thirds majority for the first time. It was also defeated in five states, two of them Malaysia’s most economically advanced, Selangor and Penang.

Barisan regained control of Perak in what many see as controversial circumstances after three assemblymen quit their parties in Pakatan Rakyat and become ‘Barisan-friendly’ independents.