GOOGLE Cloud Platform (GCP), the collective cloud computing service run by Alphabet Inc, is doubling down on its commitment to Southeast Asia (SEA) as it prepares to ramp up its services to both startups and larger enterprises, according to its Asia Pacific chief. Speaking to the media in Singapore after its third leg of a multi-city Google Cloud Summit tour which began in Australia, Rick Harshman (pic, right), Google Cloud’s managing director for Asia Pacific, said the company’s cloud business has “tripled the number of large cloud paying customers on a year-over-year basis.”

Google’s Cloud Summit is the first of its kind organised by the Mountain View, California-based search giant, which focused on four countries in Asia. The first leg of the summit was held in Sydney, and was followed by Kuala Lumpur, Singapore and two cities in India – Bangalore and Mumbai. All events were held in September.

Harshman said Google is gaining ground in Asia as more developers, coders and software companies are becoming more interested in finding out what Google had to offer, against two other leading public cloud service providers – Amazon Web Services (AWS) Inc and Microsoft Corp.

Noting that the Google Summit had gained a lot of interest in SEA, Harshman said he too was surprised by the fact that there were some 2,000 people in attendance in Singapore and some 1,400 people who attended in Kuala Lumpur.

“Google is one of three companies to lead in cloud technology [globally, besides AWS and Microsoft]. Internally, we look at the cloud as a very huge opportunity as [we believe] that only 5% of companies globally are on cloud,” he stressed, noting that Google competition as a cloud provider is not with other cloud providers but with companies that still own and operate data centres.

“[Our aim] is to have them move over from owning and operating data centres [to us],” he said.

Harshman, in a follow up interview with the media at Google’s spanking new campus in Singapore, acknowledged that in the past, Google had a gap in this space, but was quick to point out that the company is committed to the region and has invested heavily in infrastructure over the last year.

This, he said, included a new data centre for the region and a new headquarters for Asia that houses some 1,000 people. He did not however state how much Google has invested in Asia.

“We will continue to build up the team in field sales, customer engineering, professional services and support,” he told Digital News Asia in an interview.

Asked about the prospects of larger enterprises – non startup-based companies – turning to GCP, Harshman was coy about that, but remained optimistic about its chances although it did not showcase any traditional enterprises at its Cloud Summit.

“We weren’t present [in terms of data centre] in Asia in the past but now that we are, those conversations [with large enterprises] can now take place,” he argued. “Many are saying that they want to find out more [about GCP],” he claimed.

As the leading global search and advertising giant, Google’s financial might, brand recognition and technology prowess are unparalleled. But as mighty as Google’s resources are, the company isn’t viewed as a leader in the cloud computing space insofar as offering it as a compute, network, storage is concerned – collectively known as infrastructure-as-a-service (IaaS) to enterprises wanting to take advantage of the cloud.

The leader in this space is AWS, who 10 years ago began disrupting the IT services market by shoring their ability to offer computing resources as a service to companies.

Microsoft joined the fray when it too began offering similar services in 2008 –  first called Windows Azure – and which was renamed Microsoft Azure in 2014.

Meanwhile, although Google’s extensive software was ‘born in the cloud’ and always had its services built on cloud technologies, it concentrated mainly on offering it as free services to consumers rather than to enterprises.

For enterprises who were willing to pay for enterprise-grade services, Google did do so but only offered them in a low-key way. But over the past two to three years, it finally began seriously venturing into the cloud market the way AWS and Microsoft did – something that many analysts said was inevitable but at the same was unfamiliar ground for Google as it was playing catch up.

However, the cloud market today is dominated by AWS, who has about 34% of the market, compared to 11% for Microsoft; 8% for IBM and 5% for Google, according to Synergy Research.

“The increasing dominance of hyperscale players continues to play out, with all four leading companies having cause to celebrate,” said John Dinsdale, a chief analyst and research director at Synergy Research Group.

“While Microsoft Azure and Google Cloud Platform (GCP) are doubling in size, IBM continues to dominate in hosted private cloud and AWS is still over three times the size of its nearest competitor.

“The year-on-year market growth rate is nudging down as we expected in such a large market, but it remains at comfortably over 40% and AWS alone generated revenue growth of US$1.2 billion (RM5.1 billion) over the last four quarters.” 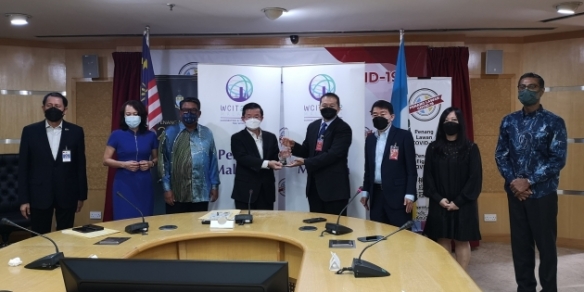