Google bolsters its cloud commitment to Southeast Asia: Page 2 of 2 Along with the top three players, the competition for cloud computing is heating up in Asia, with Alibaba Group Holding Ltd's Alibaba Cloud making a play in SEA.

In Asia however, Google has been relatively quiet. Except for announcing last year that it would build out its global cloud data centre region in Asia by this year – which it has by launching in Sydney, Singapore, both in June, and soon in Mumbai – Google hasn’t showcased many customers switching over to or embracing its GCP services until now.

At the Google Summit in Singapore, the company did not make any other significant announcements other than to say that it will have new dedicated interconnection points added to two locations: Kuala Lumpur and Mumbai. This is will allow companies to connect to GCP in a secure and reliable manner as customers of Google.

Company officials were however anxious to showcase three SEA-based customers using a combination of its products on GCP. The three were:

According to Jordan Dea-Mattson (pic, above), vice president of engineering at Carousell, the company had stability issues with its previous cloud service provider and needed to move to a more stable environment; hence it was urgently looking at an alternative player for it to migrate to.

Dea-Mattson acknowledged that the obvious choice was to select AWS as it is the leading cloud player but the startup didn’t do just that.

“There was a lot of pressure for the [engineering] team to go towards AWS but the team stepped back and decided to do a thorough evaluation of what is the right platform for us to get onto, and not assume the answer going in.

“The team spent some weeks doing benchmarks, analyses and looked at a whole range of factors. They came back and said GCP is the place to go, in order to address the stability issue they faced, as well as for it to attain scale.”

Asked why there was pressure to pick AWS, Dea-Mattson pointed out that AWS “is the cloud player that people knew,” and that it had been first to market and had brand recognition.

“Don’t get me wrong. AWS has good structure and good offerings but for us, we decided it was not the best fit for Carousell after we did our evaluation,” he explained.

Pressed further as to why his team chose GCP, he said, “Google’s level of customisability or configurations was better than what AWS was offering.

“I liken it to when you buy a new car and the base model satisfies you but you just want to upgrade the stereo system but you can’t without having to completely upgrade to a higher model.

“This upgrade comes with other features you don’t want, and at greater costs. With GCP, we’re able to define the instances that exactly meet our needs, and pay for what we need and not for anything extra,” he claimed.

For Singapore’s MyRepublic, it was all about usability, a good set of features, security and innovative technologies that G-Suite had to offer. Eugene Yeo (pic, right), group chief information officer, explained that MyRepublic had used G-Suite before in 2011, when it was then known as Google Apps. Later, it migrated to another platform, which Yeo declined to name, but in 2016 re-adopted G-Suite.

“We started with Google Apps initially but as we scaled up quickly in our business to disrupt the broadband market in Singapore with our 1Gbps service, we grew in size. At that time, we also needed to manage our security and privacy and information flow.

“Sadly, Google Apps then wasn’t as matured in terms of security and price competitiveness and we believe this was very important to us. We then decided to move to another alternate player.

“But that move also taught us a lot and gave us more experience and one of the key things we learnt is that people are very used to how the Google mail environment functions and its ease of use.”

Yeo also said Google began investing in enterprise security features and that this caught its attention. Features such as Data Loss Protection (DLP) – a software which helps users minimise what data they collect, expose or copy – was fascinating to us,” he said.

This is when MyRepublic switched back to G-Suite, something that Yeo said his company is pleased with so far.

Meanwhile, one of the major benefits of Traveloka working with Google was to enhance a key philosophy the company deeply believes in – that of using NoOps to increase efficiencies.

NoOps is a term used to describe the total automation of maintenance and other operational tasks enabled by software, which is traditionally performed by a human operations team. 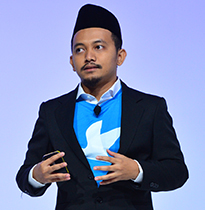 “By migrating our platform from another web service to GCP, we were able to redeploy our operation resources from an eight-man team to two,” claimed Ainun Najib (pic, right), head of data at Traveloka.

“The six engineers freed up by this move were then moved to deal with machine learning such as with Google’s Cloud Vision API.”

Ainun added that automation also resulted in fewer incidents and production issues in its operational environment. Besides this, the company’s use of Google’s BigQuery engine has also helped it make better data driven decisions.

He also said BigQuery’s support from streaming data is a major advantage for Traveloka to support its real-time analytics use case.

Using this technology, Ainun said the company no longer has to worry about storing 14 days of historical data because BigQuery stores all of it for them, with required compute resources and auto-scaling on demand when they need it.

Edwin Yapp reports from Google Cloud Summit Asia Singapore, at the invitation of Google Inc. All editorials are independent. He is contributing editor to Digital News Asia and an executive consultant at Tech Research Asia, an advisory firm that translates technology into business outcomes for executives in Asia Pacific.