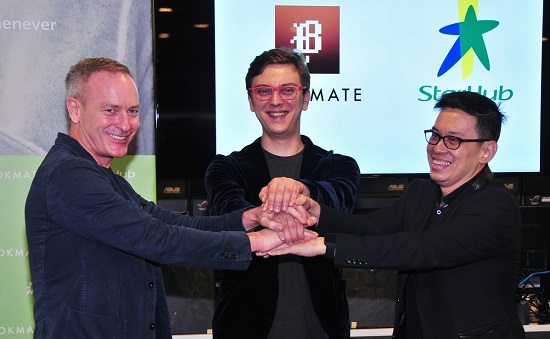 SOCIAL e-book reading service Bookmate has officially launched in Singapore in an exclusive partnership with information communications provider StarHub, as part of its international expansion efforts.

Under the partnership, StarHub will introduce Bookmate’s book-streaming service to the local reading community, and engage local publishers to offer their books on the platform.

Bookmate founder and chief executive officer Simon Dunlop said the company’s mission is to make reading “easy, accessible and fun for everyone with a smartphone.”

“By expanding into Singapore, we have made a significant first step in increasing Bookmate’s footprint in South-East Asia, and thanks to our partnership with StarHub and its highly engaged customers, we will be able to reach millions of new readers,” he added.

The Bookmate app is available for download on Apple App Store and Google Play, and features a social feed that allows users to follow their friends, favourite authors and celebrities on Bookmate, while also sharing their favourite books and passages.

The service is also available through a supported web browser.

Michael Sim, lead futurist of Entertainment at StarHub’s i3 (Innovation, Investment, Incubation) unit, said Singapore consumers are fast growing accustomed to getting easy access to an unfettered catalogue of premium streamed online content, such as video and music, across multiple devices for a flat monthly fee.

“This advancement is changing the way people consume content, and we believe the time is ripe to bring this same convenience to book fans, providing a timely boost to Singapore’s e-book scene.

“Through our partnership with Bookmate, local readers can now enjoy unlimited access to Bookmate’s vast collection of e-books through its comprehensive association with leading publishers,” he added.

StarHub is no stranger to the e-book and ‘e-reading’ space, having launched e-bookstore Booktique in March 2013, which enabled customers to easily access the company’s library of digital books on their computers and mobile devices.

In November the same year, it expanded its offering to include digital magazines with the launch of Booktique Magazines, offering 50 locally-published titles including Asian Geographic, August Man, Epicure, F***, Prestige and evo Singapore, as well as StarHub’s entertainment guide Telescope.

In response to queries from Digital News Asia (DNA), Sim said that the Booktique platform is based on an a la carte business model for book purchases, versus Bookmate’s subscription-based “book streaming” model.

“Over the one-and-a-half years since launching the platform, we’ve learnt a lot about what works and what doesn’t for an a la carte model.

“At the back of our minds we were already weighing the feasibility of the a la carte model versus a subscription-based model. When Bookmate came around, it was a good time for a partnership as its offering was in line with a model we wanted to explore,” he said.

Sim said that the Booktique platform will not be shut down but rather, repositioned as a differentiated service from the Bookmate offering, focusing more on digital magazine titles.

The Booktique brand will become an internal umbrella for the company’s overarching initiative to accelerate e-book and e-reading adoption in the country.

Bookmate’s move into Singapore follows its agreement with HarperCollins, announced earlier this year, which saw the company add hundreds of new authors to the service, including C.S. Lewis.

It currently claims over 1.5 million active monthly users in countries such as Russia, Ukraine, Kazakhstan, the United States and Germany accessing a library of over 500,000 e-books in multiple languages from 600 publishers, such as Head of Zeus, Profile Books and Serpent’s Tail. Bookmate was founded in Moscow in June 2010 by Dunlop and Victor Frumkin, the company’s chief financial officer, and is headquartered in London.

Dunlop (pic) said that Russia proved to be a good place to start a service such as Bookmate, with the nation boasting a strong reading culture, high literacy rate, and an understanding about the concept of reading communities, which is one of the service’s biggest features.

“It is also a challenging market to grow in as there is a high degree of piracy, which meant that we had to reinvent the business model and rethink the whole concept of reading.

“There was no way a business could work just on the basis of selling books, especially in a market where everything is or can be free. That really pushed us to dig deep into what were the other reasons people pick up books, and that pushed us to innovate and come up with our current model,” he said.

The service’s emphasis on social and community-building elements is one of its touted unique value propositions. It offers writers and publishers a direct engagement channel with readers, while its community-centric approach is intended to increase the service’s stickiness.

“You’ll come to check out the books we have, but you’ll stay for the like-minded people with whom you can talk to about those books,” Dunlop declared.

Bookmate received an undisclosed amount of seed funding from Finnish private equity firm Essedel in June 2011, and raised US$3 million in Series A funding from Russian consumer electronics retail giant Ulmart in May.

The seed funding was intended to bring “the social-reading magic” to more parts of the world in 2014, namely Turkey, Scandinavia, and Latin America, Mark Sullivan wrote in VentureBeat.

This expansion plan has widened to now include South-East Asia.

Bookmate currently has 44 members in its team, 14 of them being developers. There are plans to set up a regional office in Singapore in January, and expanding the team there with local hires.

Speaking to DNA on the sidelines of its launch event in Singapore, Bookmate managing director Andrew Baev said that the service’s technology platform is proprietary, and has undergone continuous improvements since its launch.

If there is one constant in terms of the challenges in growing the company, it was convincing publishers to come on board that has been the most difficult, he said, given industry scepticism over the digital book space.

Baev said this year’s deal with HarperCollins represented a significant tipping point for the company.

Dunlop said that based on usage statistics from its community base, an average reader completes one-and-a-half books a month, but at any one time could be reading up to four books concurrently.

Similar to Apple’s iTunes service, Bookmate operates on a “subscribe for access” model, which means users do not own copies of the book but rather, pay for access or to “borrow it.”

Strategy Analytics predicts the global consumer e-book market will more than double in value from US$7 billion in 2013 to US$16.7 billion in 2020.

In a report for Wall Street Journal by Geoffrey Fowler, which explores the state of e-book collections at libraries versus e-book subscription services in the United States, he noted that subscription companies “say their services are designed to let you try more books without the barrier of committing to buy.”

“But none of these services yet feel as complete as Spotify, the US$10-per-month all-you-can-eat music streaming service,” he added.

Fowler found that American local libraries offered a better selection of titles compared with subscriptions services available in the market, including Amazon’s Kindle Unlimited, which offered loans of 600,000 e-books for US$10-per-month.

The main disadvantage is the wait list, as with limited licences available, users wanting to check out a particular title would need to place a ‘hold’ on it.

It is this same disadvantage Dunlop pointed to, when asked about how Bookmate would stack up against libraries in Singapore, adding that the service has no such restriction on its catalogue.

In response to why users would subscribe to a service in a space where offerings such as Amazon’s Kindle existed, he said that Amazon does not officially offer its services in many markets with local support or content, which is where Bookmate seeks to differentiate itself.

Together with StarHub, the company will be working towards signing up more local writers and publishers to its service, with an eye to significantly promote local content.

Dunlop said that talks are already underway with some local comic creators, but declined to share further details. The Bookmate service offers customers three subscription tiers – Free, Standard and Premium. The Standard tier costs S$9.98 per month and provides access to many fiction and non- fiction titles, including 2014 Booker Prize nominee We Are All Completely Beside Ourselves by Karen Joy Fowler, Lionel Shriver’s breakout thriller We Need to Talk About Kevin, the seminal Why Nations Fail by Robinson and Acemoglu, and David Peace’s Red Riding series.

The Premium tier at S$15.98 a month adds on business and professional books such as Donald Trump’s Think Big, Benjamin Graham’s classic The Intelligent Investor, the full Collins Best Practices and Economist series, and Freakonomics by Levitt & Dubner.

Through the partnership between Bookmate and StarHub, StarHub Hub iD users can enjoy an introductory rate of S$8 a month for the Standard Tier, and S$14 a month for the Premium tier.

From now till Dec 23, the first 500 customers who register online at www.bookmate.com will enjoy full access to all e-books on the Standard tier, free of charge for 30 days.