THE phrase ‘Internet for All’ has a certain ring to it.

In the late 1990s to early 2000s, as public access to the Internet really began to take off, the first few reports started trickling in of what many pundits and academics were calling the ‘Digital Divide’ – as digital technology began encroaching into corporate, professional and personal lives, they foresaw an increasing socio-economic chasm between those with access to such technology and those without.

Concerned about this possibility, and believing that the Internet could be a great force for progress, the team behind In.Tech, the technology pullout in Malaysia’s No 1 English daily The Star, crafted an ‘Internet for All’ campaign, even succeeding in getting some corporate players involved in projects to roll out access or programmes in rural areas. [Disclosure: This writer was part of that team at the time.]

The campaign was moderately successful in that aspect, and certainly very effective in getting a conversation started about the Digital Divide and methods in closing it. As more companies and government agencies began rolling out similar programmes, and as such issues came to the attention of public policy, The Star allowed its own project to die a natural death.

If the phrase still sounds familiar to you, it’s probably because you may have seen some billboards advertising the fact. DiGi Telecommunications – quite independently, by all accounts – had coined the phrase for its own 3G (Third-Generation mobile technology) services rollout in late 2009.

“This was the time we moved from voice to broadband,” says Joachim Rajaram, head of Communications & Corporate Responsibility at DiGi. “We got our 3G licence late – we were not the first, nor the fastest, but the idea was that we would do it right.”

In 2006, when the Malaysian Government was dishing out lucrative 3G licences, DiGi was left out because, according to the then Communications Ministry, it was foreign-owned. Norway’s Telenor ASA has a 49% stake in the company.

Three years later, with the tagline ‘Broadband Done Right,’ DiGi finally rolled out 3G (via High-Speed Packet Access or HSPA technology) with its ‘Internet for All’ advertising campaign.

“What we had found was that a lot of customers had a fear of using smartphones because they thought they were very expensive,” says Joachim, speaking to Digital news Asia (DNA) recently. “So we designed our marketing campaign around the ‘Internet for All’ [concept] – which is really about offering something for everyone.”

During planning, the company came to realise two things: The first being that its business now was all about the Internet.

“We needed a change in mind-set in our company. We were no longer a voice nor even a mobile phone company; we had to think and behave like an Internet company,” he says, adding that as early as mid-2010, all growth in the industry was coming from data while voice was getting flat.

“Voice is still a major contributor to revenue, but data had been growing [in double digits] and in the last quarter, was driving 31% of our revenue,” he adds. “This is a sector obsessed about growth … so we had to change the entire company around.”

Doing business as DiGi.Com Bhd on the Bursa Malaysia exchange, the company recorded revenue of RM1.653 billion in the second quarter of 2013, up 3.4% from RM1.526 billion in the previous quarter. Mobile internet revenue grew 10.6% quarter-on-quarter, from a larger base of 6.8 million mobile Internet subscribers. Not just for a few

The second thing the company figured out while planning for the ‘Internet for All’ campaign was that it could not approach its mobile Internet business as a niche offering for the affluent.

“It can’t be a niche offering for those with big wallet sizes; with large data needs or more usage sophisticated patterns – it has to be something for everyone. So part of what we did between then and now is to make that the ‘Internet for All’ drive became real,” Joachim says.

“People who are on feature phones, for example, should be able to enjoy the Internet as well, so we came up with offerings and programmes such as Wikipedia Zero and the Opera Mini Browser.

“This way, people with feature phones could also get the same basic functionalities that most people use the Internet for these days – basic searches and social media,” he adds.

Thus DiGi rolled out programmes such as Facebook Zero and Twitter Zero, which allow social media updates via SMS.

“The plan is to slowly get as many people as possible on mobile Internet,” says Joachim. “We don’t have a fixed-line business, so we’ve hitched all our bets on the mobile Internet. It is, we feel, the easiest way to the Internet out there, to all – something for every segment of society, for every wallet size, for every usage pattern.

“All this is translated into our phone offerings; the price plans we have, the bundling with voice, SMS and data; and the easy payment plans,” he adds. “The whole philosophy of ‘Internet for All’ is that we will bring something for everyone to get on the Internet in a way that is meaningful to them.”

The company has even started offering free apps, such as the Deezer music app; as well as bundles with Skype, and messaging platforms such as WhatsApp and WeChat.

That’s on the customer-facing front, but the ‘Internet for All’ messaging got its hooks into the company as well.

“It became something very powerful for the company; it got everyone to align to a single cause; it gave us a way to talk about every part of the business in a streamlined manner,” says Joachim.

For example, the network techs could be guided by that same philosophy when they design, roll out and maintain the network, in terms of what all this should do for the customer – the best setup times and a good user experience being paramount. The marketing department had to drive the messaging around it, while the product development department had to design offerings while keeping that in mind.

And of course, even the communications and corporate responsibility department of which Joachim is in charge – public relations dialled ‘up to 11,’ if you like.

It now cuts across just about all job functions within the company, from product development, to billing, procurement and corporate responsibility.

“It may have started out as an advertising campaign, but over the past few years, we’ve made it the company mission,” he says. “So it is now in everybody’s development plan – how are you going to contribute to the ‘Internet for All’?”

Joachim says his department still participates in pure philanthropy. “We do it where it makes sense for us, and makes sense for the people who are receiving it, where it brings some value to them.

“But over the last couple of years, we have also aligned our corporate responsibility programmes to align with the company mission,” he adds. 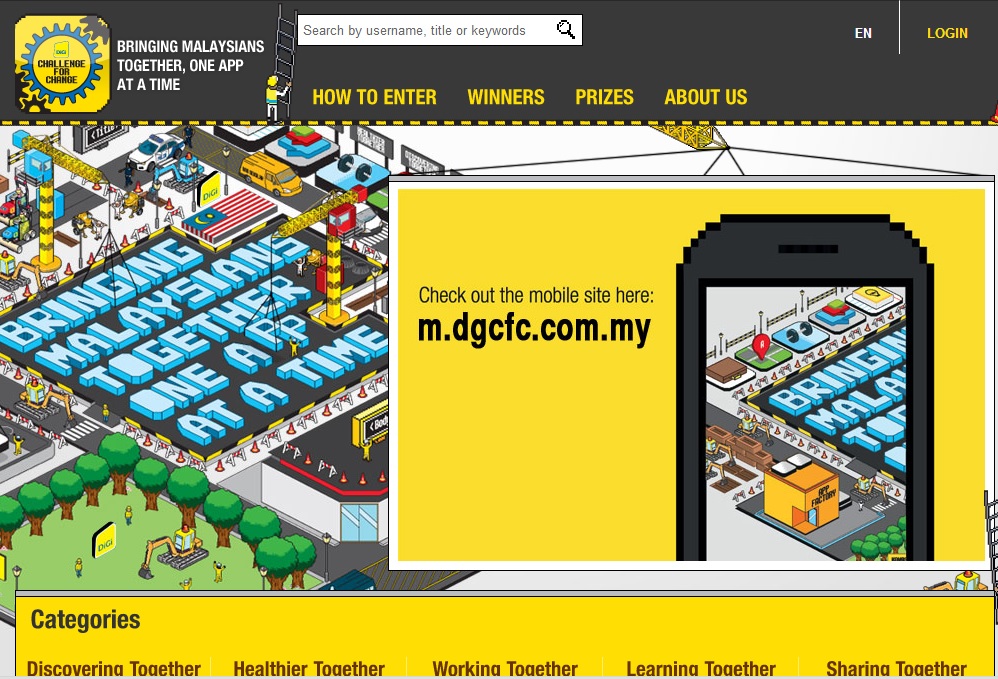 That change can be clearly seen in the DiGi Challenge for Change (DGCFC) programme. The first DGCFC revolved around the environment under its Deep Green programme, and saw the company first making a commitment to energy reduction within its own operations, as well as launching programmes for university students to design energy-saving or alternative sources that were environmentally-friendly, as well as its procurement policy.

The next DGCFC was focused on inspiring entrepreneurship around the company’s community broadband centres, and while some of the programmes are running, overall, it did not make as much of an impact as DiGi would have liked. The lesson? You can’t force the entrepreneurial spirit.

“The third year was about social innovations,” says Joachim, which challenged young people to come up with ideas for social good.

It was reasonably successful, with a doctor from Kulim in the heartland state of Kedah coming up with an idea for a medical clamp that saw him winning second prize at a Startup Weekend event in San Francisco.

But all that Gandhiesque ‘be the change that you want to see in the world’ needed a tighter focus; something more in line with what the company was doing.

“We started thinking seriously about Challenge for Change and figured we had to bring it even closer to our business – no more pet projects,” says Joachim.

Coming next: The Challenge for Change and the ‘mobile Internet for All’