NEXT year’s CeBIT 2015 trade show in March will have as its lead theme ‘d!conomy,’ centring on the rapidly growing influence of IT across all areas of business and society, and the role of IT as a key driver of innovation.

CeBIT 2015 will also feature a vastly extended offering for company founders, developers and investors from the international IT sector, making it Europe’s largest event for newly established IT firms, main organiser Deutsche Messe AG said in a statement.

CeBIT is one of the longest-running international trade shows, and is held annually in Hannover, Germany. The name stands for ‘Centrum der Büroautomation und Informationstechnologie und Telekommunikation, German for ‘Centre of Office Automation and Information Technology and Telecommunication. “Digitisation is everywhere and is shaping ever more dimensions of working and social life,” said Oliver Frese (pic), a member of the managing board of Deutsche Messe.

“IT is transforming existing business models while at the same time giving rise to completely new ones. Information technology now has the ability to rapidly disrupt entire industries.

Frese pointed to the game-changing IT industry trends of the past few years, namely big data, cloud computing, mobility, social media and security, noting that they had developed rapidly and were now converging to have a profound combined impact on both the business world and society generally.

“By virtue of convergence, fundamental innovations wield great transformative power that has already brought us to the dawn of a new, digital era of industry,” he said.

Among the big, overarching themes grouped under the d!conomy umbrella are the Internet of Things and the all-embracing trend toward networking and integration.

In the manufacturing industries, these themes are commonly referred to as Industry 4.0 and relate to a concerted push toward digitally integrated production and machine-to-machine (M2M) communication. Meanwhile, Deutsche Messe said the entire startup ecosystem will be presented under the title ‘CeBIT Scale 11: The Digital Source of Innovation.’

The display category is aimed specifically at bringing young entrepreneurs together with major corporations, potential accelerators and investors.

Its primary goals are to highlight the creative potential of startups, to extend networks between new and established companies and to stimulate investment by financiers, the organiser said.

“CeBIT has always been the platform for innovations and new business models. Time and time again, this is where recently formed companies have shown that they can revolutionise entire industries with a single good idea,” said Frese.

“However, to do this they need support. CeBIT already has an extremely successful international springboard for startups, namely the CODE_n innovation platform, which brings together new and existing companies and generates long-term partnerships.

“CeBIT Scale 11 will now extend this offering, facilitating dialogue between founders and developers on the one hand; and companies, mentors and both public and private investors on the other,” he added.

The German Startups Association has also welcomed the move by Deutsche Messe.

“Nationally and internationally, there is a multitude of networking and information events for young entrepreneurs. CeBIT, however, is the only one to effectively bridge the gap between startups and established IT companies and investors,” said chairman of its board Florian Nöll.

“We are supporting CeBIT Scale 11 because this platform brings together all the components of the startup ecosystem and as a result will make an impact nationally and internationally,” he declared.

The name CeBIT Scale 11 – not an allusion to This Is Spinal Tap’s “goes to 11” – is derived from key concepts that are critical to the target groups being addressed: Create, develop, elaborate and found.

The first letters of these concepts – c, d, e, and f – constitute a musical scale. The number 11 is the number of the hall that is home to the startup ecosystem.

CeBIT 2015 opens its gates to visitors from around the globe on March 16 and will run for five days, closing on March 20. For more information, go to www.cebit.de. 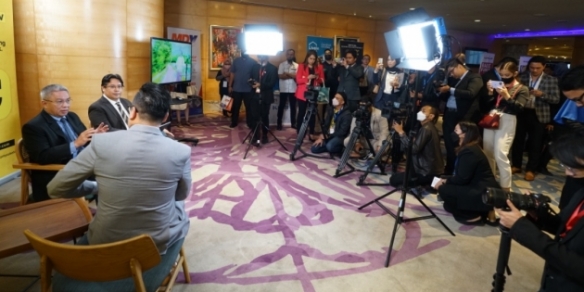