MICROSOFT Corp has released the results from a new Asia Pacific study which revealed that the majority of students in the region recognise the value of coding in their education and the potential it creates for their future careers.

However, the study also found that students feel relatively unsupported in their interest for coding, signalling an urgent need for educators to look deeper at integrating it as a core subject in the school curriculum.

Conducted in February 2015 in line with the Microsoft YouthSpark #WeSpeakCode campaign, the survey polled 1,850 students under 24 years old from across eight countries in Asia Pacific on their sentiments towards coding or software programming.

The countries involved in this study were Australia, Indonesia, Malaysia, the Philippines, Singapore, South Korea, Thailand, and Vietnam.

The students, who were also asked about the learning opportunities for coding that are currently available to them, came from a variety of academic backgrounds, including arts and humanities, STEM (Science, Technology, Engineering, and Mathematics), business, and other general fields of study.

According to the survey, 85% of students in Asia Pacific want to know more about coding, and three out of four students (75%) wish that coding could be offered as a core subject in their schools.

This suggests that coding has the potential to be a highly engaging subject that can capture the attention and imagination of students, leading to positive learning outcomes, Microsoft said in a statement.

The study (click infographic to enlarge) also underscores the broad understanding amongst students in Asia Pacific about the impact of technology on businesses and the society – 77% of students say that coding is important to their future careers, and 74% agree that coding will be relevant to all careers in the future, regardless of areas of specialisation.

“The results from the Microsoft survey clearly show that the majority of students in Asia Pacific no longer question the value of coding,” said Microsoft Asia Pacific president Cesar Cernuda.

“These youth fully recognise its importance in helping them acquire fundamental 21st century skills and prepare them for success in the future.

“As our world continues its evolution into one that is mobile-first and cloud-first, it is important for educators in the region to stop asking whether or not to offer coding as a subject – but how it can be integrated into the curriculum as soon as possible,” he added.

Other noteworthy results from the study include:

However, despite the widespread enthusiasm and interest in coding, only 53% of students in the region said they have an opportunity to learn coding in school, whether as a core subject or an extracurricular activity.

Furthermore, only 54% of students say their parents think coding is important to their future.

This indicates a severe disconnect between the students’ interests and the support that they are receiving from schools and at home, Microsoft said.

There is a need for educators and parents in the region to quickly reflect on how they can better support the younger generation in taking their first coding steps, especially when 74% said they would be willing to take up coding classes outside of regular school hours.

In fact, 44% of students have already looked beyond the classroom and picked up coding on their own through online tutorials.

On a more positive note, a few countries in Asia Pacific are seeing increased momentum in the uptake of coding – the majority of students in the Philippines (72%), Thailand (70%), and Vietnam (66%) report that they currently have an opportunity to learn coding in school.

This is an encouraging trend that other countries in the region should aspire to emulate, Microsoft said.

The second edition of the Microsoft YouthSpark #WeSpeakCode campaign kicked off recently, with local events in more than 13 countries throughout the region.

Aimed at inspiring youth in Asia Pacific to try their hand at coding and become creators, the campaign will connect aspiring student coders of all skill levels with the tools, resources, and experiences they need to turn their innovative ideas into reality – whether they only have an hour, a whole semester, or an entire year’s worth of time to invest, Microsoft said.

“More girls and women in Asia Pacific are increasingly receptive to STEM as an education and career path, putting them in a great position to acquire the skills that future jobs will demand, including jobs that may not even have been created yet,” said Trina Liang-Lin, president of the Singapore Committee for UN Women.

“Microsoft’s effort to accelerate this progress and mentor girls in the technology space by supporting Girls2Pioneers and through the YouthSpark #WeSpeakCode campaign is enormously significant to our commitment to celebrate and encourage what women can achieve with the right opportunities,” she added. 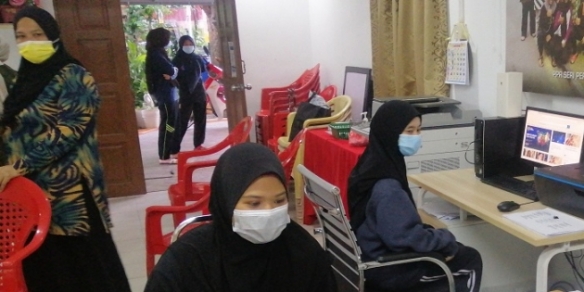