‘You may become irrelevant in the blink of an eye’ IT was the first time in Accenture’s storied history in Malaysia that the consulting firm had gone outside its walls to recruit a country managing director. In trying to explain the rationale for the move, Azwan Baharuddin (pic), the new man in Accenture Malaysia’s practice, comes up with a neat play of words.

“Just as how Accenture wants to inspire change into its clients, it too wants to change, to get a fresh perspective. You could say the decision to bring me in was almost like an Accenture on Accenture move.”

And while he has settled in quickly, no thanks to his strong background in ICT and accounting, he admits that the first few days felt like, “it was me against the world” type of feeling as the 3,000 strong organization in Malaysia adjusted to the new boss who was not from their ranks.

Those early days of adjusting to and feeling each other out are now out of the way. In a fast changing digital inspired world, its clients are facing too many uncertainties, challenges and rocky situations – and need a reassuring voice and confident hand to guide them through the challenging times. To wit, witness how Singapore’s central bank has just talked about allowing the island nation’s banks to invest in e-commerce companies or payment platforms, ostensibly as a means to compete against non-traditional players disrupting the banking space – think Alibaba.

And Azwan aims to ensure that, Accenture is that steady hand they can rely on.

One of his remit’s is – to transform Accenture for the next 20 years  - in the next three! “That is bold thinking,” he acknowledges. It has also got him thinking and desiring to want to play a central role – not just in Accenture’s future but Malaysia’s as well.

And, with future all about digital, riding that wave to growth and job creation is front and centre in his crosshairs as he aims for Accenture to play a key role here in helping both companies and the government manage this ongoing wave of disruption to their advantage.

The rate of change is almost hard to follow he says, citing some analysts who predict that 40% of the companies in the Fortune 1000 will not be around in 2024. “You are going to see many more Kodaks to come,” he warns, referring to the US film and camera maker that has become a poster child for how not to deal with digital disruption.

He refers to the Global Information Technology Report 2016 which features the latest iteration of the Networked Readiness Index. The report assesses the factors, policies and institutions that enable a country to fully leverage information and communication technologies (ICTs) for increased competitiveness and well-being.

Malaysia ranks 31 in the world and second in Southeast Asia (SEA). It is also a digital savvy nation with 145% mobile penetration and has also produced its share of unicorns, with JobStreet being the first and now Grab, grabbing all the headlines as a disruptor.

But it that enough? “Despite the political rhetoric from some global countries, it is an open, borderless world in the digital economy where your traditional competitor no longer exists. Where the likes of Alibaba have done what no one thought was possible – they have become everything to everybody. You just may become irrelevant in the blink of an eye if you do not monitor carefully and react quickly to the changes,” he predicts.

And that is going to be the challenge for Malaysian corporates where the convergence of industries will be one of their biggest challenges he feels. “Globally and regionally, you have media companies trying to become tech companies, telcos trying to become digital companies and providing financial services, tech companies aiming to build cars, meter companies wanting to provide healthcare, I mean it’s all coming at them fast and furious,” he says.

And dangerously, he finds that corporates here seem to think they are handcuffed to their existing businesses and business models or that they are too big to change. “But really, they have to force change.” And that involves relook what their business is and what business they really want to be involved in because the traditional industry verticals are breaking down.

“Everybody is rushing to be everything to everybody but who is providing the customer experience,” he asks. “I think that is what people are fighting very hard to own.” This involves delivering a level or personalization and customer service, especially to millennials, that is digital first and which many digital disruptors understand instinctively but which brick and mortar corporates, complacent with their yearly profits, do not. 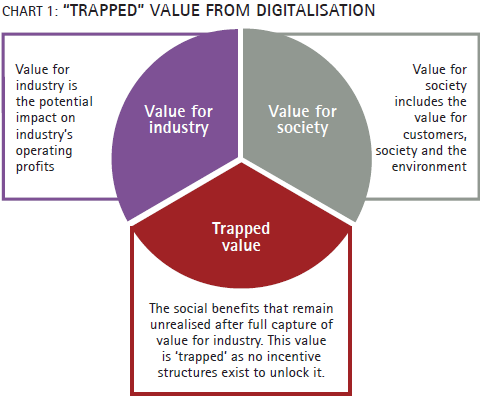 “The biggest question for the moment is, how to unlock the trapped value of digital (chart 1) because it is the disruptors that are quickest to make money – not the incumbents.”

His own thinking here is that, to survive, corporates need an ecosystem strategy and select the right partners to execute for them. These right partners could be other corporates and definitely the digital disruptors. “You can never do this alone,” he says “those days are gone.”

It’s not just how companies compete that has to change in today’s digital infused environment, regulations too. Even the secretary general of the Ministry of Finance, Tan Sri Mohd Irwan Serigar Abdullah, acknowledges this, when welcoming the inaugural cohort of 56 startups from around the world to the MaGIC Global Accelerator Programme last week in Cyberjaya.

“In fintech, the regulator needs to create rules to make it easy for SMEs to participate and compete in the market.”

To Azwan, regulations can be a powerful tool for the government to accelerate or slow the pace of digital adoption. “Do you transform regulation so that we adopt digital faster to force the change or do you say, ‘Let’s manage it to make the change slower so people can adapt to change.’” Either way, it is not easy to answer he notes because if you don’t change and disruption comes, regulators will be left behind.

While regulators now face pressure to be agile, Azwan notes that there are six characteristics that seem to define the brick and mortar players who are have unlocked the trapped digital value from their businesses. (chart 2) The examples of companies that have captured their digital value, for example the likes of GE, are global examples. Is there a local catalyst for change? Azwan thinks there is, provided there are three of more strong competitors in the space, “perhaps” he says. “But when you don’t have that strong competitive element, it is up to you on what you want to do.”

Azwan notes that many Malaysian companies have clearly started their digital journey but that overall, they are not keeping pace with the global leaders. “Even some of our GLCs have appointed chief digital officers (CDOs) and I see that as a good sign. But they need handholding. Because, what does the role mean? How do you integrate it with the more established CIO role?”

To him the CDO role is more about questioning and exploring new ways of doing existing things, about reinventing the business and the role is definitely not about technology. But the role is also a temporary fix, “because, once everything is digital, that CDO function is not relevant as a stand alone anymore.”

Interestingly, Azwan observes that GLCs that operate overseas and compete against multinational companies are more forward looking in their digital approach and awareness of being asset light where possible.

While it is easy to look at the doom and gloom side of digital disruption, Azwan on the other hand sees great opportunity. “I actually think there is a massive opportunity for Malaysia right now and we should seize it to become a top competitive digital economy because we are now where we are [based on the various global indexes] as a competitive nation without yet taking full advantage of the digital opportunity available.”

Surprisingly, in most instances, it is the government that has set the pace for digital adoption, while the Digital Malaysia strategy was developed in 2011 and began executing in 2012 led by Malaysian Digital Economy Corporation (MDEC), the Ministry of Science, technology and Innovation (Mosti) and startup focused agencies like Malaysian Global Innovation and Creativity Centre (MaGIC) have also been strong drivers of the various components of the digital ecosystem to quicken their embrace of digital.

“The launch of the Digital Free Trade Zone is the latest example of driving home the message that we, as a nation, have to not just adapt to, but also lead in shaping the digital economy,” says Azwan.

“Our companies must not wait until they are in trouble and being disrupted before investing in their digital capabilities. They have to act now,” he urges, a strident tone in his voice.

Near a tipping point

He strongly feels Malaysia can do better than its 31st ranking in the Networked Readiness Index. “I think we are near the tipping point and need to articulate the dream clearly so that everyone is marching to the same tune.”

He sees TN50 (Nasional Transformation 2050) as an important part of this articulation and even made mention of this in his opening remarks when his appointment as Accenture country MD was made. “Accenture aims to be a key driving force to shape the nation’s vision for the next 30 years (TN50) to be ready and relevant for the future. We are firmly committed to being a part of Malaysia’s advancement into the future in terms of innovation, economic growth and social well-being.”

On the point about innovation, Azwan aspires to help establish Malaysia as such a hub. With Malaysia already being a Global Delivery Centre for Accenture with over 1,000 highly qualified staff that will more than double in the next 12 months, Azwan needs local talent to draw the business from Accenture and then once established here, to drive it forward in aggressive growth mode.

Which is why, anyone having a conversation with Azwan can be assured that at some point, education will come into the picture with Azwan getting animated over the urgency to adapt the education system to the needs of the digital economy.

“Education provides the future supply side and when talking about primary and secondary education, we need to change the way kids think and we are starting to do that but it’s hard because their parents and teachers don’t think with a digital skew.”

Higher education also concerns him as at a time when Malaysia needs relevant degrees he feels that the education system is still offering some degrees that are not relevant. “We urgently need to refresh the curriculums offered to stay relevant.”

That becomes even more urgent in the context of the rising concern over job loss from ever more advanced levels of automation and sophisticated software that has started to replace white collar jobs as well.

“But that is the conundrum of today – when higher efficiency causes displacements.” But being the optimist that he is, Azwan also feels that there will be new industries, new types of jobs popping up. But we have to get used to the fact that there are no more jobs for life. “But there will be jobs created that you and I never dreamed of doing before,” he says.

This article first appeared in The Edge Malaysia and is the first in a series called, Malaysia Reimagined.Now