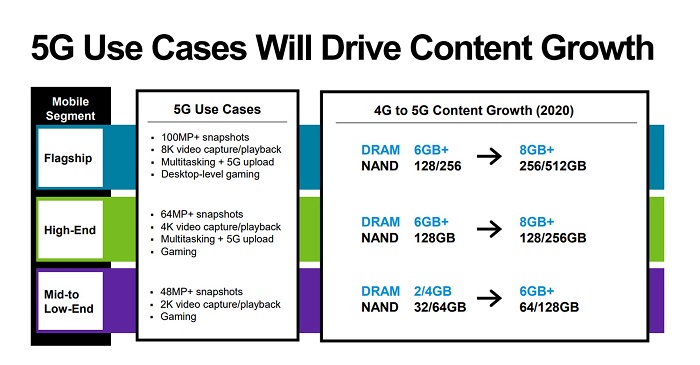 Given that Micron Technology is a company that specialises in storage and memory, it may come as a surprise to many that the Boise, Idaho based company has a very keen interest in 5G developments. "We are actually at the heart of 5G, because without memory and storage, those things don't work,” says Raj Talluri (pic), Micron Technology SVP and general manager for the Mobile Business Unit.

Being at the heart of 5G is a good place to be at. "In China, for example right now, more than 50% of all phone sales are 5G models," Raj points out, resulting in a corresponding demand for mobile dynamic random-access memory (DRAM) by smartphone manufacturers, including its customers like Xiaomi.

It isn't just that there are more phones being sold, it's that they also come with higher storage and memory configurations. "There is no 5G phone in the market today that has less than 6 gigabytes of memory," Raj points out, a significant upgrade given that most 4G phones used to have between 2GB to 4 GB memory as standard.

This demand for more memory and storage is related to the high speeds promised by 5G. For example, because it will be easier to share larger photographs, the phones will correspondingly have higher resolution cameras. "And what we find is that as you increase that, immediately the amount of storage and memory access goes up very, very quickly," says Raj.

He believes the mobile phone market is just the tip of the iceberg. "Whether it's automobiles, edge computing, servers, (or) mobile phones, we are actually seeing a lot of demand for memory and storage because of 5G.” Building NANDs to the sky

Raj explains how Micron is able to construct higher density storage devices. One constraint faced by manufacturers now is that it's getting more difficult to shrink NAND (flash memory) devices, so companies are starting to make 3D NAND, and stack the memory vertically. Micron has announced plans to start shipments of its 128-layer 3D NAND products in the fourth quarter of its FY2020.

"We give you more density for the same price, because we are able to build them up higher."

The characteristics of 5G networks will drive demand for memory and storage in their own way as it takes a lot of processing and memory to really deliver the 5G experience.

For example, higher bandwidth will encourage downloading of larger files or higher definition videos, while low latencies may demand memory speeds that can keep up. Meanwhile ubiquitous connectivity will herald IoT on a massive scale, which means more devices on the edge, which means more data to potentially manage.

Raj also makes the distinction that despite improvements in bandwidth resulting from 5G, it's not voluminous reams of data that you want transferred, but rather having it processed before it is sent on in a form that can help you with your business decisions.

"So we're actually seeing that as more 5G is coming onstream, people want to put more memory at the edge because they want to send information and not data," he explains.

Nevertheless, Raj says it's hard to predict what's next. "I get asked a lot about the killer app? I tell people, there are one or two apps that you think will be big, but really the best apps that will drive the network, you don't know."

Still, he believes that what happens many times in phones, is that when you build a platform, “the killer app will just evolve over time".

Micron certainly will be hoping that 5G will shape a significant growth market in their future. The company has been able to maintain a revenue rise in fiscal Q4 2020, and expects an annual rise of 18%-28% increase due to stabilising memory chip prices, increased demand in China's data centre market, and a spike in demand for home computers as people start working from home.

As analysts have pointed out, Covid-19 has seen a shift to cloud storage and streaming, and correspondingly there would have been reduced demand for computing devices and its components. However, given predictions by Fitch Ratings that smartphone demand will recover strongly in 2021, and that 5G smartphones will represent between 17% to 20% of total shipments, there is cause for optimism for Raj. "These are definitely interesting times".