AMAZON Web Services (AWS) kicks off its re:Invent 2015 conference on Oct 6 in Las Vegas, bringing together thousands customers, developers, partners, and members of the media who will be training their lenses on what US$5-billion cloud behemoth will be up to in the next 12 months.

At last year’s edition of the annual conference, the company’s third, the main theme was how AWS was transitioning from a cloud service provider that is more suited for startups, to one that is the choice for serious enterprises that run mission-critical workloads.

AWS began life in 2006 in the backrooms of parent company Amazon.com Inc. What started as an experiment in web services derived from its learnings as a global e-commerce player, has now become a billion-dollar business on its own.

For a long time, AWS never released information on revenue or earnings, despite mounting criticism for failing to do so. It would only say that it was “growing by leaps and bounds,” leaving competitors, analysts, media and more importantly, Amazon, guessing as to whether it was actually making or losing money.

This year however, AWS finally began sharing its revenue figures, a move that not only surprised most market watchers, but also astonished shareholders and analysts alike with better-than-expected results.

As I’ve argued before, the move to reveal these figures was good for the company, and AWS has gained even more visibility with would-be customers. The good times are still rolling, and the market is bullish about the company.

Threats on the horizon The question of course is whether AWS can continue its momentum, and how long it can keep growing.

Some analysts and industry observers are keenly watching out for how the company is going to defend its turf against the competition, particularly Microsoft’s Azure, and to a lesser extent, Google’s Cloud Platform.

To put things in perspective, according to research firm Gartner in its latest cloud computing scorecard, specifically with its Magic Quadrant for Cloud Infrastructure as a Service, AWS is still the undisputed leader.

Gartner says AWS is “serving an innovative, agile and responsive market and also remains the industry's preeminent thought leader.” The research firm also notes that it has “the broadest range of use cases, including enterprise and mission-critical applications.”

But second-placed Microsoft isn’t sitting on its laurels and has improved markedly from the previous year, according to Gartner’s scorecard.

In an online-only web conference dubbed AzureCon held only just last week – a move ostensibly designed to try and upstage AWS’ re:Invent 2015 this week -- Microsoft fired the first salvo by acknowledging that while AWS is the largest cloud player and the one to catch, Microsoft “tries harder” than AWS, reports Fortune.

The online business daily reported that the Redmond, Washington-based tech giant is committed to supplanting AWS and quoted Microsoft’s cloud chief Scott Guthrie as saying, “Obviously we aspire to be No 1, but until then we’ll use the Avis model and try harder,” alluding to the US car rental company’s highly-recognised tagline, ‘When you’re No 2, you try harder.’

Microsoft wasn’t merely spewing rhetoric. Guthrie made a series of announcements designed to take the fight to AWS.

Firstly, it announced support for ‘containers’ on its Azure platform. By year-end, a preview of functionality to support popular open source container management platform Mesosphere will be available on Azure.

Containerisation is a lightweight alternative to – and touted as being more efficient than – full virtualisation.

Secondly, Microsoft announced the Azure Internet of Things (IoT) suite where data from IoT devices can be uploaded and analysed.

It also announced a new ‘N’ family of virtual machines, powered by the graphical-intensive Nvidia processors, and added security features that allow virtual security monitoring tools to work on top of Azure.

There was also geographic expansion too, with Microsoft announcing three new data centres in India to support the burgeoning software development and startup scene there.

That said, AWS has also announced that it will be entering India in 2016.

Gartner sums it up this way: “Microsoft has now solidly entrenched itself as the runner-up in market share behind AWS.”

Meanwhile, Google’s strength, Gartner says, lies in its strategy that allows other organisations to ‘run like Google’ by taking its highly innovative internal technology capabilities and exposing them as services that other companies can purchase.

But although Google has significant appeal with technology-centric businesses, it is still in the rudimentary stages of learning to engage with enterprise and midmarket customers and needs to expand its sales, solutions engineering and support capabilities, Gartner argues. 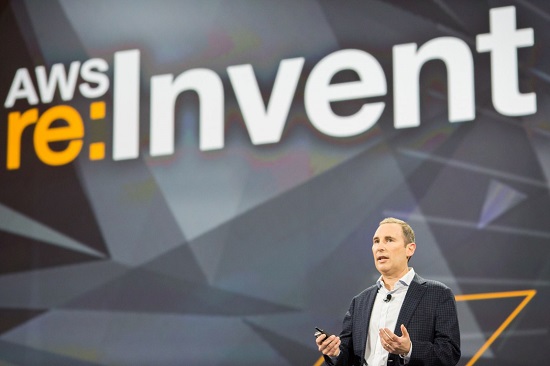 In the face of such competition, AWS cannot just brand itself as an enterprise-grade cloud player but must be able to accommodate the existing infrastructure which enterprises have invested in over the years.

This necessarily means being able to interface with enterprises’ legacy systems, and to do this effectively, it has to offer a solid hybrid cloud proposition.

At last year’s re:Invent, AWS’ cloud chief Andy Jassy (pic above) acknowledged that its public cloud model was not ‘a-one-size-fits-all’ solution, and that this kind of decision should not be an ‘either you’re all in public clouds or not’ argument.

He said AWS can still cater to customers which have on-premises data, by using an expanded set of services for those wanting a hybrid path.

Gartner believes that Microsoft has come very far and is poised to find a place in the heart of enterprises because it has a vision of infrastructure and platform services that are not only standalone offerings, but also seamlessly extend and interoperate with on-premises Microsoft infrastructure.

This view is shared by other analysts too. For instance, Matt McIlwain, a venture capitalist with Madrona Venture Group, says enterprise customers buy a certain way as they have compliance and contracting processes, according to The New York Times.

“They don’t just adopt the newest, most innovative thing. And there is a whole bunch of incumbents, from IBM to HP (Hewlett-Packard) that already count those companies as customers,” he said.

“Its engagement model is very different from traditional IT suppliers in terms of contracts, services, and relationships, for instance,” he said. “This is neither good nor bad, just different.”

However, it is proving to frustrate larger organisations that are used to dealing with traditional IT vendors,” he had argued.

Technology Business Research cloud analyst Allan Krans points out that while AWS did quite well when customers used a small number of cloud services in isolation, today’s customer usage is quickly shifting to include integrated multi-cloud and hybrid implementations.

This is where AWS lags behind traditional IT vendors such as Microsoft and IBM, he says in a research note.

“The current lagging position directly relates to the isolationist approach employed by AWS in how its services are sold and consumed by customers,” he argues.

“The majority of customers not only need vendor help to design hybrid solutions, but also desire flexibility to use multiple vendors.”

Krans also notes that leaders in the hybrid space are taking on more responsibility for making sure their offerings integrate, can be managed, and can tie back to business objectives.

He argues out that AWS’ success hinges on expanding investments in sales, marketing and development to build more open, standard support into its services, partnering and aligning more widely with cloud, traditional IT and service providers, and packaging its technology into solutions more effectively.

“All of those initiatives will require additional headcount, training and commitment to increase its involvement in the hybrid cloud market.

“We expect Amazon, driven by the corporate need for growth and funded by its current profitability, to implement these strategies so its cloud disruption does not tail off just as hybrid cloud takes off,” he cautions.

Edwin Yapp reports from Amazon re:Invent 2015 in Las Vegas, at the invitation of Amazon.com Inc. All editorials are independent.