BookDoc sees a healthy start to growth in the region WHAT do you do when your startup manages 500% growth in its first year? If you're Chevy Beh (pic), BookDoc CEO, you improve your growth in the second year to 700%. Life must be good.

"A lot of sleepless nights, and I travel almost every other day," said Beh, "It's a lot of tough work.

Most of that travel would be between the five countries that BookDoc currently operates in: Malaysia, Singapore, Indonesia, Thailand and Hong Kong.

Originally BookDoc was positioned  as an app to help users book appointments with doctors and other medical practitioners. "That's how we started but after that we added a lot of new features," said Beh.

One example Beh highlighted was BookDoc Activ. It's similar to the customer loyalty programmes that rewards purchases with points, except in this case, it’s about how active you are.

"We ask you to exercise and that exercise is your currency," he said. The scheme currently has over a hundred reward partners, and points are redeemable in 12 countries, covering about 2,000 physical and online locations.

Having a thriving user base is nice. But the real source of BookDoc's growth happened when they began to deal directly with companies.

"First year we were B2C completely. Second year we went B2B," Beh explained. BookDoc can now count among its clients companies like Shell, Petronas, and TNB, and is also conducting projects with the Malaysian Ministry of Health, Socso, and the Ministry of Defence.

One of the things BookDoc does is to help companies manage their panel of doctors. Beh claims BookDoc has access to 40,000 health providers, and they can use the volume to help leverage for improved deals. "Think of us as an aggregator, like Booking.com or Agoda. You can prenegotiate with many providers to get a better price."

Another service they provide is to assist companies analyse its employees’ health data. For example, it might highlight that employees in one city seem to get ill more often than another, prompting further action.

One major achievement is that BookDoc is now cashflow positive. Beh highlights that they've only used half the money that they've raised, meaning they have millions of dollars (US) left in the war chest, and he's prudent about how it's spent. "I don't have fancy offices, I don't have fancy out there," he said, “We didn’t buy a pool table!”.

The SuperApp of healthcare

Beh's ambition is for BookDoc to grab it all. "I hope to be the SuperApp of healthcare," he said, "You think healthcare, you think BookDoc".

Such ambitions will bring it into competition with the likes of Zocdoc, WeDoctor and Ping An Good Doctor, and in the process, grow it to "unicorn" status. But Beh believes he's toiled through some of the toughest parts already.

"Healthcare is not easy to transform," pointed out Beh, highlighting its regulatory nature, "They have extremely high barriers to entry".

However, as the former BP Healthcare Group managing director, Beh managed to somehow navigate past those hazards. 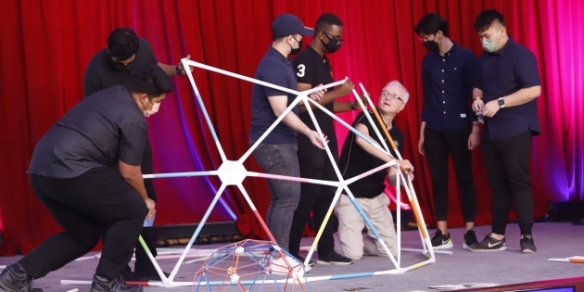