Aerodyne realising commercial benefit from its MCO work in Malaysia 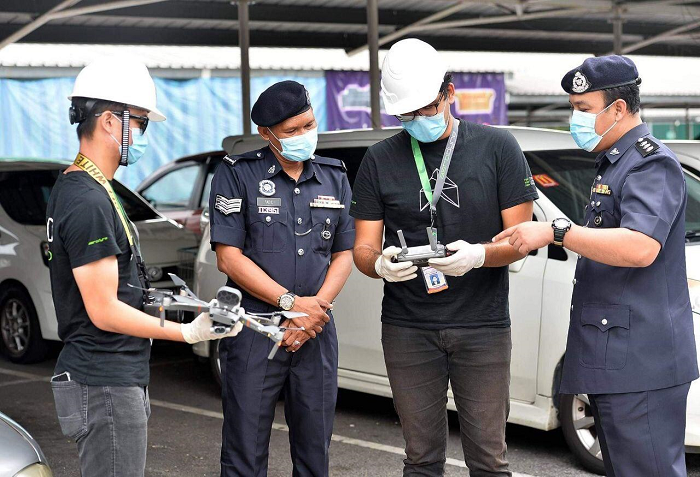 Enforcement authorities all over the world have quickly taken to using drones as their eyes in the sky to help their on ground units quickly identify potential trouble spots and dispatch units immediately.

So it was no surprise that the Royal Malaysian Police (RMP) and Malaysian Armed Forces were using drones almost from the beginning of Malaysia’s Movement Control Order (MCO) to ensure public compliance.

One of the three drone companies involved in the effort, supporting the RMP was Aerodyne Group, a Cyberjaya-based global leader in AI-based drone services for enterprises. For Aerodyne, what initially started out as a its contributions from a Corporate Social Responsibility aspect, has now morphed into a commercial product that sees the service being used in India and with pilots running in Jakarta, Indonesia and in the United States.

But as Kamarul Muhamed (pic, right), founder and CEO of Aerodyne tells Digital News Asia, the commercial aspect happened by chance. “We were giving an update for Malaysia during our weekly global leadership meeting and mentioned this initiative. Our Indian team leaped at it as did those from other countries who feel there is real commercial value in what we are offering as a CSR service in Malaysia.”

Importantly, it is not the mere operating of the drones that give the value. Rather, it is overlaying the video and pictures captured with data feeds on Covid-19 hot spots that enables the police to focus their monitoring efforts in Red and Yellow zones.

And what initially started with 23 teams of two AeroRangers each in the field with the police, quickly saw the involvement of some data scientists and data analysts who built some data models to process the information captured in the field and present it in an easy to use dashboard that allows the RMP to quickly respond to problem areas or potential issues before they become problems. “We started building the dashboard on March 27th and it was like a virtual hackathon with the team working around the clock writing code,” says Kamarul. Version 1 of what is now called vertikalitiOps (see pix) took three days but it was a further week before the team was happy with the dashboard that has now become an invaluable asset to the RMP in their job, monitoring MCO compliance.

VertikalitiOps is a dedicated and secure GIS-based data sharing and analytics platform that provides realtime video streaming and analytics through a web and mobile based visual dashboard. The overlaid Covid-19 locational data has further enhanced the situational awareness of the virus spread and guided the drone operation areas to ensure maximum efficiencies of the police teams out in the field.

“It is very exciting to build the platform from scratch and be part of this work with the police and provide them with the tools that allows them to better and safely do their jobs,” says Kamarul.

On a daily basis Aerodyne also extracts seven highlights of the day for the police and this could be anything from districts moving from Red to Green to Yellow zones or spikes in non-CEO compliance. This data helps the police make informed decisions for the next day’s actions.

The Covid-19 data from the Ministry of Health is grouped by police district with each district HQ only able to see the Covid-19 cases in their zones and thus decide where their teams of officers, along with an AeroRanger team, are to be sent to. Police HQ in KL has full nationwide visibility.

Police teams head out at 8am and stay in the field till 10pm, says Kamarul. Each time of AeroRangers can run up to 10 flights per day or mission as Aerodyne calls it, with a range of between 2- to 3-sq kilometres per flight.

About 20% of the flights run a live stream of the data captured while the rest of the data is downloaded at the end of each flight by an AeroRanger who then uploads it to the system.

A press release Aerodyne sent out yesterday offers an indication of the scale of the operations nationwide. Exactly one month into the effort, Aerodyne has achieved a milestone of completing over 1,000 hours of drone flight time with the 23 teams covering over 40,000 kilometres with an average speed of 40km/hr. More than 50% of the 90 drones currently in action daily come from Aerodyne, says Kamarul who estimates that the company has committed US$600,000 (RM2.5 million) worth of drone equipment and provided US$350,000 (RM1.5 million) worth of services on a CSR basis so far.

While there is deep satisfaction in playing a key part in the battle against the coronavirus, the entrepreneur in Kamarul is eyeing further developments from his global operations on commercializing the platform they have built for Malaysia.