EMC Corporation and Lotus F1 Team have partnered to create the information technology backbone they said was necessary for the racing team’s aspirations for a World Championship in 2015.

To achieve this goal, Lotus F1 Team must optimise its resources to face the challenges presented by the new 2014 Formula 1 regulations; the most radical design changes since the introduction of the composite monocoque.

The changes will have a significant impact on the cars’ design and engineering, and on engine power, aerodynamics and fuel consumption in particular, EMC said in a statement.

Lotus determined that a complete overhaul of its IT infrastructure – both trackside and at its Enstone, United Kindgom, headquarters – would be necessary to meet this challenge, while also generating new sources of competitive advantage.

“The 2014 season will see a raft of rule changes and a revolution in the way Formula 1 cars are designed and built. With the emphasis on greater aerodynamic efficiency and a 35% reduction in fuel consumption, the technical director’s challenge is greater than ever and EMC is delighted to have joined the Lotus F1 Team’s portfolio of technical partners,” said Jeremy Burton, executive vice president, Product Operations & Marketing, EMC.

Burton added that EMC will work with the team to enable secure and efficient management of its design and development data, as well as on-track applications

The partnership with EMC is being implemented to spearhead the team’s development programme for its 2014 car and will see Lotus adopt a range of private cloud technologies, enabling more agile and cost-efficient storage, management and protection of information.

The 2014 redesign represents the most significant change in recent Formula 1 racing history. In addition to car design changes, a complex network of more than 200 sensors can generate in excess of 25 megabytes of data per lap for each car.

In a sport where hundredths of a second mark the difference between a victor and the rest of the pack, the ability to collect, make readily available in a cloud-like manner and quickly analyse these massive amounts of big data has emerged as a key competitive differentiator. In order to facilitate secure CAD file-sharing and collaboration between the team and its partners, Lotus F1 Team will also be using EMC’s Syncplicity enterprise file sync and share solution and Documentum Information Rights Management (IRM) technology which tracks and protects documents, messages and attachments while in transit, at rest and after delivery.

At the trackside, a second VCE Vblock System, incorporating EMC’s VNX solution, will be deployed to support the team’s virtual desktop infrastructure as well as its on-track applications.

As part of a four-year deal, EMC will gain unrivalled access to the GENII Business Exchange platform – Lotus F1 Team’s elite group of IT and technical partners – in addition to a range of global hospitality and incentive packages.

“In today’s Formula 1, technology is critical to producing a winning car. If we’re going to do that in 2014 – and ultimately challenge for the World Championship – we need the best IT resources available, and that is why we have chosen EMC,” said Patrick Louis, chief executive officer, Lotus F1 Team. 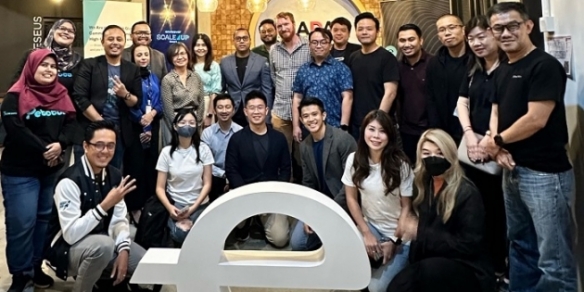