A US$2-million grant from the Omidyar Network to Yangon tech community Phandeeyar will help support a for-profit accelerator programme to be launched in September.

Each team will get US$25,000 in seed money, office space, and six months of coaching by some of Phandeeyar’s 30 mentors, which include executives and investors in Myanmar and abroad.

Each team will be able to take advantage of server hosting, advertising and other services worth more than US$200,000. The services have been donated by such corporate partners as Amazon Web Services, Microsoft, Telenor and Ogilvy.

Applicants of the accelerator must be based in Myanmar, already have a product in the works, and be willing to commit themselves full-time of development for six months.

Pedersen said the judges particularly will be looking for applicants proposing an innovative, scalable product “perhaps something related to digital marketplaces, e-commerce or financial services.”

The focus on a scalable product attempts to overcome a problem faced by many successful Myanmar digital companies: They often start out with a unique product but soon end up concentrating on providing services, like digital marketing or making apps for other companies, to assure a steady cash flow.

Myanmar developers are decisively mobile oriented. In just two years, since the cost of SIM cards abruptly plunged with the arrival of private carriers Ooredoo and Telenor, the number of active SIM subscriptions in the country has grown more than tenfold: from three or four million to 45 million today. The judges, yet to be selected, will include several Phandeeyar Accelerator staff and three or four external mentors and investors.

Facebook continues to be Myanmar’s favourite site, visited by more than half of smartphone users daily. A close second is the messaging app Viber.

By the end of the six-month course, each team should have a product ready to launch to the market and be prepared to pitch to potential investors.

“After six months, one or two or three might be able to raise US$100,000 to US$500,000,” said Pedersen, a Dane who has worked on digital projects in Afghanistan and India.

Phandeeyar is to set up a for-profit arm that will take a 12% stake in any successful startups.

“We have had quite a lot of interest from investors around the region, so we might do two demo days – one halfway through the programme, and one at the end in early March 2017,” said Pedersen.

“Due to our longer-than-average accelerator programme, it is likely that some of the startups will raise additional funding while they are still in the Accelerator,” he added. The US$2-million grant from Omidyar Network, the “philanthropic investment firm” of eBay founder Pierre Omidyar, will also support a non-profit “social impact accelerator” for civic and social entrepreneurs to be launched by early 2017.

The grant also enables Phandeeyar to expand its staff from 25 to 30, add to its equipment for 3D printing and product design, and start an open data portal.

The launch of the accelerator will “be the first time we will work in a structured way,” Pedersen said.

All activities take place in Phandeeyar’s premises, which occupy the entire top floor of one of Yangon’s dusty early high-rises, serviced by a creaky, lethargic elevator. There are 6,000 square feet, plenty of natural light, white floors, only a few interior windowed walls and an 11th floor view of the Yangon River.

One corner is a coworking office with a high-speed broadband fibre connection. In the largest open space are comfy couches and a ping-pong table.

While staff in other Myanmar offices tend to dress formally in long sarongs, Phandeeyar is a jeans-and-tshirts zone for men and women alike.

Election monitoring on Android and iOS

A major achievement was the two-week contest held last September during which 30 developer teams vied to create the most useful app to educate voters about candidates and processes in the lead-up to Myanmar’s November 2015 general election.

The election was not only historic but complex, with more than 6,000 candidates from 92 parties running for more than 1,170 seats in the national, state and regional legislatures.

With both Android and iOS versions, the winning MVoter 2015 app was installed more than 200,000 times, Pedersen said. The winning team of five university students earned a prize of US$4,000. Along with three runner-up teams, it also won entry into Facebook’s FbStart programme. In late 2014, the Omidyar Network provided initial seed funding of US$400,000 to Phandeeyar, shortly after it was founded by chief executive officer David Madden (pic).

An Australian, Madden had cofounded a digital strategy agency in New York and a website for global petitions, Avaaz, before coming to Myanmar in 2012.

Besides Phandeeyar, the 16-year-old Omidyar Network has given grants to the Open Myanmar Initiative for election monitoring activities, Yangon Journalism Institute and Myitmaklia News Agency. It also supported a Global Witness report on labour conditions in Myanmar jade mines. 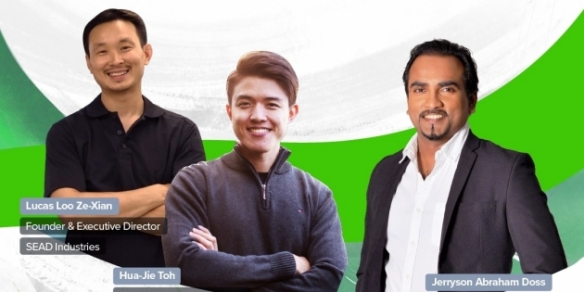