WHEN one thinks of an unmanned aerial vehicle (UAV) or drone, it’s often in the context of military use, or as a consumer product that provides little functionality.

But these days even enterprises are becoming aware of the advantage having drones perform dangerous, repetitive or dirty jobs that no one wants to do.

Garuda Robotics, which describes itself as a platform-agnostic drone company, is aiming to provide companies with commercial solutions, and intends to build a platform to analyse and derive insights from drone feeds.

The company was founded at the Startup Asia Jakarta 2013 conference, organised by technology blog Tech in Asia, by Pulkit Jaiswal (then a student), his lecturer Mark Yong, and technologist Ong Jiin Joo, who is also the chief technology officer.

Rise of the (cheaper) robots Garuda Robotics was registered as a company in early 2014, after its founders saw an opportunity for drones to do more for businesses, according to Ong (pic above).

Drone commoditisation has arrived – components and sensors are now cheaper, to the point that enterprises consider the technology accessible.

“For example, LiDAR (light detection and ranging, a type of radar that utilises lasers) cost a six-digit sum five year ago, and this year it’s down to four digits,” said Ong, adding that sensors are being miniaturised and manufactured at a lower cost.

For years now, robots have been used in the manufacturing sector, under controlled environments such as clean rooms. But the real world out there, with its dirt and debris, is a different matter, full of various obstacles and challenges that are a change from the parameters robots normally operate within.

Despite this, Garuda Robotics has managed to secure a handful of customers, which has helped it to develop solutions catering to different industries.

“Our first year was spent doing a lot of operations for customers. In doing so, we realised that these operations are quite straightforward and anyone can do it,” said Ong.

This realisation led Garuda to rethink its business, and pivot into a drone data company.

Making sense of drone data is key, especially if there are hours of visual data to pore through.

“A lot of people say they can do analytics – like the CCTV [closed-circuit television] guys, who can detect faces or movement,” Ong said.

“But drones are constantly on the move, and have a top-down view,” he said. This makes it difficult for current face recognition and movement detection technology.

Therein lies the need for a platform that can unify data and extract actionable insights for enterprises to use, he argued.

“Enterprises see a more critical need to make sense of data and derive insights from the data they collect,” Ong said.

But as data is put through the analytics grind, the amount of data will increase, and the need for a platform to make sense of it all becomes even more pressing, he added.

Thus Garuda Cloud was born, giving customers a browser-based dashboard to see the data collected from their drones. The interface allows the customers to plan routes and manage their drone fleet.

This platform will be instrumental in showcasing insights into the data collected from drones, allowing enterprises to save money and increase productivity, according to Ong. Currently, the Garuda Robotics team consists of three people, with partnerships to shore up its manpower needs.

According to Ong, the company has “deep partnerships” with Nanyang Technological University and the National University of Singapore, both in the city-state, especially with those involved in computer vision technology, such as video and visual analytics.

“They are hungry for data, so our partnership works very well – we plug in the data and they come up with a new way of looking at the data.

“Through some iterations, we either come up with something we can use or something they can use to apply for research grants,” he added.

As for the rest of the South-East Asian region, it currently has a partner in Indonesia and is looking for one in Malaysia. 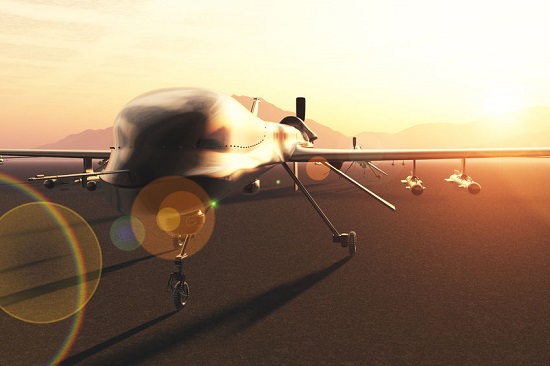 Garuda Robotics’ hardware-agnostic nature allows for flexibility and capability in building viable solutions for its customers, the company claims.

It has already built drones for a variety of customers. Mounting a thermal camera next to a video camera on a drone has proven useful for a solar panel company, for example, allowing it to detect overheating cells when inspecting these panels.

“We are working with solar integrators for that, [to see] how we can be part of their operations and maintenance process,” Ong said.

He said that each solar panel needs to be inspected once every six months. Now Garuda Robotics drones can do that, instead of these companies getting a person to don a harness.

The thermal feature is also helping out in the oil and gas industry.

“We have used thermal vision to do an inspection of fire safety equipment, and volumetric analyses for storage tanks,” said Ong.

Oil is pumped in and out of a storage tank constantly, and meters need to be recalibrated for accurate readings of how much oil is in a tank.

While there is advanced equipment to recalibrate meters, which involves lowering it into the tank, they often fail, leading companies to look for cheaper alternatives.

“They just use a thermal camera and look at the tank, since the temperature of oil and air inside the tank is different,” Ong told DNA.

With a simple volumetric calculation, Garuda Robotics can tell the company how much oil is in the tank.

Ong said the company can also combine LiDAR, visual and various other data sets to build a 3D model of terrain and buildings.

Beyond the sensors and the data drones can collect, Garuda Robotics offers both autonomous and piloted drones.

Drones’ high-tech components require careful handling, and a drone falling out of the sky would certainly damage its sensors.

“The difference between aerial drones and ground robots is that ground robots have an emergency stop which can be activated at any time – you never want to do that with a drone, so you need to stop gracefully,” Ong told DNA.

Most drones come with flight controllers as a basic safety feature, and land when they begin to run out of battery power.

There are numerous other safeguards as well – such as hovering at a pre-set altitude, which gives time for the landing area to be cleared so it can land.

Losing the communications link is also an issue, especially if a drone flies out of range of the ground station or encounters interference.

However, as the signal can be intermittent (where the drone loses the link for a few seconds before regaining it), operators can adjust the time (from three to 20 seconds) between signal loss and a trigger to engage the safety feature.

Should the signal not be re-established within the set time, the drone will activate its safeguards above.

Ong said there is still development space for sense-and-avoid systems – that is, of being able to ‘see’ and thus avoid other drones.

However, this is still in its infancy. “We bought and tried all the hardware available in the market, and it doesn’t work. The demo might be perfect but it doesn’t work in the real world,” he argued.

Securing the signal between the drone and the ground station is a balance between performance and security. The usual encryption for these signals includes Secure Socket Layer (SSL) or a virtual private network (VPN).

“Because it’s on WiFi, the only encryption is a software layer,” Ong told DNA.

The more secure the signal, the more performance limitations are placed on the drone.

“Some customers require it [the signal] to be very secure … [this requires building] a bigger bird to carry a bigger battery, or more computational power to encrypt the video,” he said. One of the biggest challenges for Garuda Robotics has been to ground its customers’ expectations in reality.

“Consumer drones and Hollywood have disproportionately owned the minds of the public – people often come to us for sci-fi applications,” Ong said.

“Due to the drone hype, everyone wants a flying drone – but you don’t need a drone in all cases; sometimes a ground robot or another solution might be better,” he added.

Educating customers on the uses of drones has been one of the startups’ top priorities. It aims to gently bring down customer expectations, especially those fuelled by unrealistic drone pitch videos. [Clarified]

Surprisingly, the recent legislation by the Civil Aviation Authority of Singapore (CAAS) to regulate drone flights has been to Garuda Robotics’ advantage.

“This creates a barrier of entry to people trying to do this job,” Ong told DNA.

The CAAS regulations have also helped, now that the company can use the fact that it is licensed by the Singapore Government to put customers’ minds at ease.

But regulations come with their own burden too. There are limitations on where Garuda Robotics can fly to test its drones.

Navigating the definitions for no-fly zones has been a minefield for the company, with each country having its own criteria, often couched in language too arcane for the general public to follow.

“The most common no-fly zone is 5km from any aerodrome. But what does it mean? Is it cylindrical to the sky? Is it a dome? Does it include the take-off routes of planes?” Ong lamented.

While consumer drones have preprogramed no-fly zones, these are not aligned to the individual countries they are sold to.

“For example in the United States, they will just draw a circle around an airport; while in Singapore, it starts from the perimeter and you draw 5km from there,” he added.

When asked about its plans for the next six to 12 months, Ong said, “We are still operating and developing new use cases.”

Garuda Robotics is also looking to “go deeper” with its existing customers to develop better solutions and use cases.

And it will be looking at raising funds within the next year or so.

“It is important to build and develop something patentable before we seek additional funding,” Ong said.

Garuda Robotics will continue to build and develop its data analytics platform, to one day provide a unified platform for drone operators to plug in data and crunch out insights.