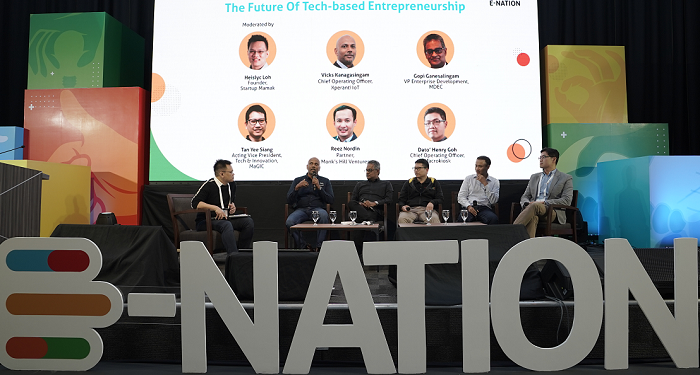 “Technology is moving so fast. At the rate technology is moving, everything – whether it’s plantation, plastic or factories – will be tech-based. Regardless of your sector, all of us are going to be in technology entrepreneurship,” says Malaysia Digital Economy Corporation (MDEC) vice president of Enterprise Development Gopi Ganesalingam.

“All of us need to understand technology, whether you like it or not.”

That is the inevitability raised, perhaps unsurprisingly, during the E-Nation Symposium forum titled “The Future of Tech-based Entrepreneurship.” Gopi, a panellist at the forum, offers an example through an anecdote of him meeting AirAsia founder Tony Fernandes during the nascent days of the budget airline’s online ticket purchasing system.

“I said ‘Tony, this is going to alienate people like my parents’. And he said: ‘Gopi, don’t worry. Technology will push them to do it’,” he recounts.

“Technology will push us. Adoptability is inherent in us. The question now is how do we push it. How do people like us – MDEC, MaGIC (Malaysian Global Innovation and Creativity Centre) – push the agenda for the adoption of tech? That is the key question we need to ask ourselves.”

In education we trust

The answer, as the forum comes to a consensus, is through education – but not just in terms of skills. Panellist Tan Yee Siang, who is MaGIC’s Tech & Innovation acting vice president, shared his perspective. “From my experience of running mentorships, the top three questions directed at me are: Where can I find developers and programmers? Do we have time to work and code this? And, where can I get funding?” he says.

“Education can solve most of these problems. The mindset has to be correct as well. If you have funding but not the right way to execute it, you’re just wasting your resources.”

But how do we define talent? As Gopi notes, could we consider someone with straight A’s as talent?

“To me, that’s not talent. It’s your soft skills – the ability to comprehend problems and come up with solutions – to me, that is talent. Can they think? Can they problem-solve? Can they play as a team player? Those are more vital aspects.”

For Vicks Kanagasingam, chief operating officer of Xperanti IoT and one of the other panellists at the forum, the “passion of wanting to solve a problem” is a quality that needs to be inculcated.

“Startups all around the world are about solving problems, not about making money. If you start a business as an entrepreneur to make money fast, you will fail fast,” he says, adding that the problem-solving mindset is an approach that needs to be taught at a young age.

Panellist Reez Nordin, a partner at venture capital company Monk’s Hill Ventures, says that people shouldn’t be too focused at learning technical skills like coding – skills that eventually can be automated. Instead, people should pick up liberal arts, which in turn fosters skills like time management and resourcefulness – skills more important to entrepreneurs.

Being open for failure

“You don’t need to be a technologist to become an entrepreneur,” summarises the forum’s moderator, Startup Mamak founder Heislyc Loh. He points to fellow panellist Henry Goh, co-founder and chief operating officer of Macrokiosk, a company that wasn’t built by coders.

To be a successful tech entrepreneur, Goh says that people need to champion discipline, aspiration and persistence. In a way, entrepreneur-based companies have an advantage over non-entrepreneur-based organisations, as entrepreneurs have a “one-track mind” towards pushing an idea hard, and growing and improving it.

Moving forward, we could look towards success stories like Silicon Valley and China for inspiration. But what values should one adopt? Reez observes that the reason these areas can foster such successful entrepreneurship is because they are able to embrace failure.

At the same time, he implores that entrepreneurs shouldn’t think about fundraising as a sign of achievement. Some startups, he notes, make fundraising a goal. Rather, the focus should be back to the fundamentals of business – profit and sustainability.

Vicks agrees. Additionally, he says that startups shouldn’t all aim to be unicorns, noting that even giants like Grab hasn’t exactly made money outside of investments. “Think big, start small, act fast. In the end, we must create something that solves problems, create jobs, is sustainable and then profitable.

“That, for me, is a true entrepreneur.”

E-Nation Symposium: It takes a nation to build successful businesses