WHILE its investment focus lies in the e-commerce, mobile and biotech spaces, Singapore-based early-stage fund the Fatfish Group seems to like well-rounded startups with strong inhouse technical and engineering teams.

It has made six investments so far – its latest was in Singaporean-based AutoDirect Corporation which operates the Indonesian online auto insurance portal RajaPremi.com.

Five of the investments were made via Fatfish Medialab, an incubator for the i.Jam Reload programme of Singapore’s Media Development Authority (MDA). This is a government-funded scheme that assists Singapore-based startups. Fatfish administers the programme in cooperation with the MDA.

Lau Kin Wai (pic), the Malaysian founder of the Fatfish Group, tells Digital News Asia (DNA) that the sixth and latest investment, AutoDirect, was actually made through his latest fund, set up with S$300,000, called Fatfish Internet Pte Ltd.

As an aside, of interest is that Lau’s biotech fund, called Fatfish Lifesciences Ltd, invested in a stem cell company that Lau himself was the founder of in 2008, called CellSafe Biotech Group. In response to a question from DNA, Lau clarifies that there is no conflict of interest as it is actually Cellsafe Life Sciences that holds shares in Cellsafe Biotech and it is not part of the Fatfish Internet group.

Cellsafe Biotech Group has received more than RM4 million of funding to date, all private funding.

Fatfish launched its investment forays into the Singapore startup scene in May 2013 with four investments and in June it made a fifth investment with a 15% stake in a site called Dressabelle.com, which Lau claims to be among the top five fashion sites in Singapore with more than 50% revenue growth in the last 12 months.

The site focuses on providing working ladies with the latest fashions. It was ranked among the 10 most searched online shops in Singapore last year. It started its online journey in 2010 as a simple blogshop but has been able to rapidly move up among the online fashion stores in Singapore.

According to Lau, the vibrancy of the e-commerce sector in Singapore is partly explained by the rising rentals which have led some merchants to focus on online as a more viable platform.

Calling themselves ‘strategic investors,’ FatFish aims to help Dressabelle scale to Thailand and Malaysia by leveraging on its knowledge and network across South-East Asia.

“Focusing on a business development role, we plan to help it get established in Thailand and Malaysia next,” says Lau.

The Malaysian site has just gone live, and is already claiming to be the country’s leading online fashion shop catering to the career woman.

Valuation was at a PE (Price Earnings) ratio of between 12 and 15 times, and based on revenue not profitability. Lau says Fatfish took this approach because it understands that it is tough for early stage e-commerce companies to become profitable.

One other thing Fatfish liked about 12-person Dressabelle is that it has a strong inhouse development team which has helped automate nearly all its back-end processes tied to e-commerce, especially fulfillment.

Meanwhile, its most recent investment was in Indonesia in July, when it took an unusually high equity position of 65% in RajaPremi.com, a startup that operates an end-to-end vehicle insurance portal that delivers instant real‐time quotes, online orders and insurance policy payments.

The high equity portion and corresponding high valuation where Lau paid a “seven-figure sum in US dollars through a combination of shares and cash,” is a reflection of a market he is bullish on, as he feels it has passed a tipping point in its digital journey with mobile broadband and fixed fibre rollout growing rapidly in the main cities.

“Its 3G (third-generation mobile) service is as good as Malaysia’s, and with more people getting online, Indonesians will eventually start looking for more things to do [online],” he says.

He is determined to be there when this wave crests. The investment into Jakarta-based RajaPremi.com is part of this strategy to get ready. 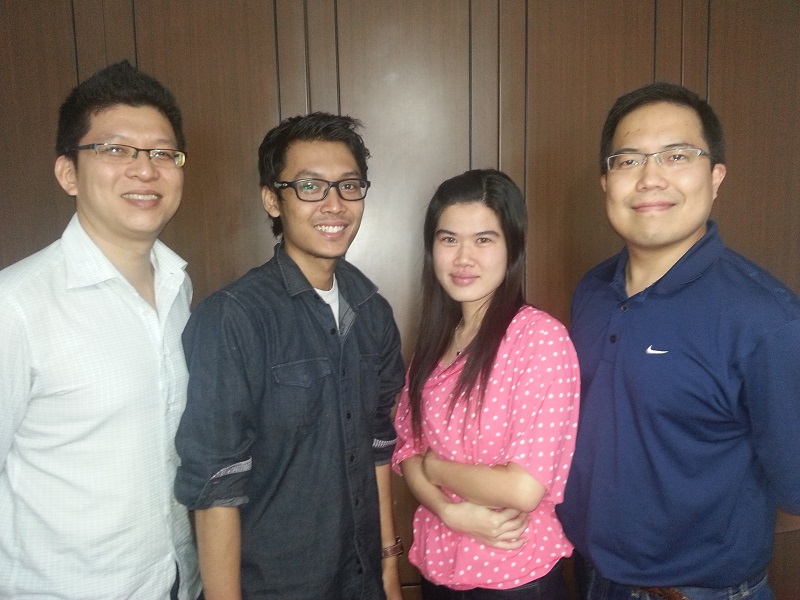 He describes the site as being similar to Malaysia’s MyEG but without a government contract. It has already lined up seven insurance companies as its partners.

Of interest is that one of the founders is Malaysian Keith Chee (pic, far left, with his team), who used to fly regularly into Jakarta while working for a Malaysian software company.

Besides its business model, Lau says the “well-balanced composition” of the founders, with strong commercial and technical skills, as being another pull.

Fatfish got into RajaPremi very early because the founders had been coming to Singapore to seek funding. “That’s one of the things about Singapore – many regional startups come there to meet venture capitalists and other funds to raise money,” says Lau.

He believes Fatfish can help RajaPremi especially in marketing its services to Indonesians. And to do this, it will also leverage on the six startups it has invested in, with a seventh in the works.

“This is part of our value to them. For instance, we have invested in a gaming company called Kensington Ventures which is creating some games at Blazable.com,” he says. Once Blazable.com is live and has traffic, Lau sees RajaPremi using that platform to create awareness about its services.

It will be interesting to see how much Lau draws from the experience of MyEG when it was trying to popularise its services in Malaysia. The campaign to use local actress Maya Karin on billboards and TV spots was particularly effective.

Of course RajaPremi’s challenge will be on having the marketing funds to replicate such a move in Jakarta.

Lau’s own challenge will be to prove that his fund can actually add value to the domestic and regional expansion of his portfolio of young companies.