HOW powerful can an audio-only 35-second pitch be? One startup thinks it could be just the ticket to helping founders cut away the fluff and get straight to core of what the business is really all about.

GoPitch is the brainchild of Rahul Goel, who started it as a weekend project after having a classic eureka moment.

“While excitedly watching TechCrunch Disrupt pitches one day, it hit me. Why not create a super simple platform for people to pitch their startups and ideas to get feedback from anyone, and exposure at the same time?” Rahul tells Digital News Asia (DNA) via email.

GoPitch is billed as a web-based, community-driven tool to help startup founders and idea generators 'elevator-pitch' their concepts in 35 seconds or less to get feedback and advice; make relevant connections with potential partners, investors or employees; and gain exposure for their ventures.

The platform utilises the Django framework, is coded in Python, and runs on Amazon Web Services’ servers.

It had its beta launch on Sept 11 and the team claims that it has since attracted more than 15,000 unique visitors to the platform.

“What makes GoPitch really unique is the fact that unlike other websites out there, you record audio versions of your pitches – not text. “Because in the real world, you don't write things on paper, you speak. GoPitch helps its users perfect that in a really fun and encouraging way,” says Rahul (pic).

To help with growing the platform, he roped in Melvin Chee from Melbourne, Australia and George Wong from Toronto, Canada to lead the social media, growth, and marketing side of things.

Rahul says that some of the pitches on GoPitch have been played hundreds of times already, and a few even more than 1,000 times. He also claims that founders have reported back saying that GoPitch has gotten them great traffic, and in some cases, upwards of 70% of their traffic on the day they pitched.

“The feedback they received for their pitches led to them recording multiple versions, each time iterating and improving. Through our platform, some startups even managed to form some sort of partnership benefiting both parties,” he adds.

The hunt for Asian voices Meanwhile Chee (pic) says that a few entrepreneurs from South-East Asia are already on the platform, but the GoPitch team wants more from the region to join in, a key area of focus in the venture's outreach efforts to founders all over the world.

“We have been trying to reach out to entrepreneurs in Asia and to be honest, it has not been an easy journey.

“We realised that some of the Asian entrepreneurs are not eloquent with their oral presentation skills, and therefore we’ve provided some tips to these guys on our ‘FAQ’ section,” he adds.

GoPitch currently only supports pitches made in English, but there are plans to categorise pitches into different regions in the near future.

Asked for some advice on recording the 'perfect pitch,' Chee says it is best to first listen to pitches currently doing well on GoPitch, and to try to understand what makes them special.

“Learning from people better than you in any setting should be everyone's objective. Second, frame the problem quickly and make sure a very clear value proposition follows it.

“Finally, understand that 35 seconds is the maximum duration – most of the best pitches on the platform are actually shorter than that. Remember, nobody holds a stopwatch while you're pitching in real life.

“A good pitch can make 35 seconds seem like five seconds, whereas a mediocre pitch may seem like it's five minutes long. Time is relative,” he adds.

He is currently running a startup called PheedLoop that does work in digitising and improving the feedback process for live presentations, meetings, and conferences. Wong (pic), a graduate from the Ivey Business School in Canada, has previously worked for small web startups, handling their growth while also working on content marketing.

Chee, an economics and finance graduate from RMIT University in Australia, currently runs Eubi Pty Ltd, a startup that focuses on distributing portable universal mobile chargers and accessories all over Australia.

The venture remains a fully self-funded enterprise but the team will be looking into getting investment in the near future.

Asked about the platform’s business model, Chee admits that GoPitch was not originally conceived as a moneymaking platform.

“Having only been around for about four weeks since the idea was truly conceived, things are changing so fast. However, we have been brainstorming and thinking long term about how we could monetise and potentially make GoPitch a sustainable business.

“Ideas like promoting pitches and offering exclusive access to pitches – think daily rapid fire pitch podcasts for venture capitalists – to more obvious ones like advertising are being considered,” he adds.

For now, the immediate focus is on growing and nurturing a committed and helpful community, and creating a large repository of founders delivering pitches.

“Our goal is to draw in five pitches per day after three to four more weeks of testing and validation, and have somewhere between 2,000 and 4,000 pitches recorded one year from now.

“GoPitch used to be more exclusive with a token system, making it invite-only, but we’ve recently lifted this requirement so it is now open to anyone,” says Chee.

He says the team got a lot of initial traction from the platform’s beta release on Product Hunt, a website that showcases a curated and updated list of new startup products on a daily basis.

“Sustaining that traffic has been our greatest, and most enjoyable, challenge. Launching on ProductHunt was a great way to validate our concept, work out any technical glitches, and understand user behaviour. We're now ready to make a real dent,” he adds.

Ultimately, the team’s dedication to the platform is driven by a simple vision, says Chee: “We want to create the most humanising online presence for entrepreneurs to share their ideas with the world.” 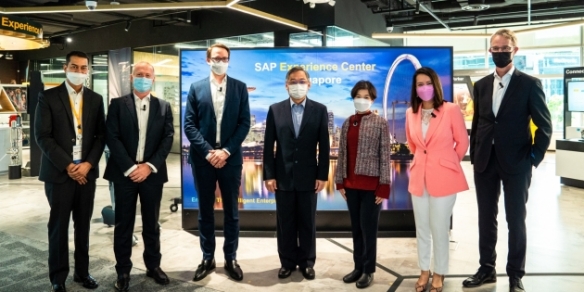