“DO you think the Malaysian market of 29 million people is too small,” Digital News Asia (DNA) asked Catcha Group founder Patrick Grove (pic). His response was not surprising.

“Not at all. With iProperty, Jobstreet and MyEG all being worth over RM1 billion in market capitalisation individually, who would find that small?” he threw back.

“Name me one startup in Vietnam close to that level of valuation and development,” he challenged.

Grove was responding to some comments made by Japanese venture capitalist (VC) Nobuaki Kitagawa, director of overseas investment at CyberAgent Ventures, to DNA last month.

Nobuaki was speaking to DNA when attending the MOSTI-MSC Malaysia InnoTech conference which brought together VCs from around Asia and Malaysia to meet selected Malaysian companies.

CyberAgent Ventures is a Japanese VC established in 2006 with an early-stage and Asian focus to its investments. These investments can range from US$300,000 at the seed level to US$1 million at the Series A stage.

The two key points that struck out during the interview with Nobuaki was his contention that the market size of Malaysia was too small; and his observation that South-East Asian startups that do well in their home market will find it difficult to scale to a neighbouring South-East Asian country – principally because they will not enjoy the same home ground advantages in the neighbouring country.

If he is right, that just blows a big hole in the business plan of many startups in the region which are encouraged to think of South-East Asia as one market. 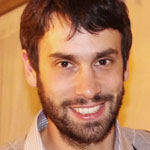 Lauria (pic) agreed with Nobuaki that it's very hard to scale between markets. “And we're finding that out first-hand with our portfolio. But there is always opportunity and I see it in Malaysia.”

Grove also agreed with Nobuaki that creating regional leaders is not easy. “But it is not impossible either. It has been done by Jobstreet, JobsDB, Groupon, iProperty and so on. It just requires a serious commitment and an amazing team,” he said.

Speaking of JobStreet.com, its founder and chief executive officer Mark Chang declined to wade into the debate, calling it a “glass half-full or half-empty debate.”

Chang noted that if a company can figure out how to expand beyond its own borders, then its business will have the opportunity to grow even larger.

“It will depend on the entreprenuer’s capability. It is not easy for sure, but there are many who have done it, including AirAsia. Why not give it a try?” he said.

Grove thinks that the Malaysian market, with its relatively high disposable income, more than makes up for its smaller size compared with Vietnam and Indonesia.

“The evidence is in the results,” he said. “Of the largest Internet companies in South-East Asia, the top three by market cap are JobStreet.com, iProperty and MyEG.”

Grove also argued that while Malaysia may have a smaller population than Vietnam or Indonesia, “it monetises a lot quickly, mainly on the back of its middle class which is ready to try and buy new ideas or products quickly.”

For startups, this quick market validation is invaluable as it allows them to fail quickly, to change models, or to find what works without spending too much time and money going down the wrong road.

This receptive middle class with an appetite for Internet based services and products may just be the strongest lure of the Malaysian market for any startup – and its VC backer.