JFDI.Asia cofounder Hugh Mason and its programme manager Ray Wu are halfway through a three-city tour of Malaysia. Connections and understanding local culture came shining through as the vital ingredients for startup success when they visited Kota Kinabalu this week. This is the second of a three-part series of their journey.

Meng Wong [company chairman Wong Meng Weng] and I were inspired to set up JFDI (Joyful Frog Digital Incubator) by the idea that it was becoming possible to innovate and teach entrepreneurship systematically.

In 2011, when we set up some of the first Startup Weekends with partners across Asia, it was clear that something interesting was happening to startups at Y Combinator, Techstars and Steve Blank's classes on entrepreneurship in Stanford. But the world had yet to learn the phrase 'Lean Startup' and today's gurus on the subject, like Eric Ries and Ash Maurya, were largely unknown.

What a difference a couple of years makes. By the time we ran our three-day workshop last week in Penang, many participants had read the same books as us and were already aware of the techniques we discussed.

Yet, like everyone else, they struggled to turn the words on the page into actions that would transform their businesses. So that became a priority for the MSC Malaysia Accelerator Lite programme, which we are delivering with the generous support of Multimedia Development Corporation (MDeC), across the country this month.

Getting people together yields more than learning. It also brings the opportunity to build trust by working together, to swap ideas and insights, and to share horror stories too about where things go wrong. We are staying in touch with the teams we met in Penang and feel very confident that they will carry on without us to build a community of trusted friends who can support each other as they struggle to build their businesses.

Another week, another city. This time, in Kota Kinabalu (KK), Ray Wu and I met equally talented people. Yet it soon became clear that the startup tools we shipped from America to share felt very new in Sabah and, straight out of the box, they might not immediately fit the challenges that local entrepreneurs face.

Why? Because the culture is different here, even compared with Penang.

Life in Sabah is slower, our new friends in KK were quick to tell us. It's a close-knit community where many business people don't see the point of professional social media like LinkedIn.

The idea of posting lots of information about yourself online feels quite alien when everyone knows everyone. Even googling someone you are about to meet is uncommon, unless they are a competitor. Personal introductions, face to face, are traditionally the way that trust is built here between people who might, in time, go on to do business.

Likewise, the notion of contacting people you don't know and expecting them to share their "pain points" for "customer discovery" just feels weird. "What's this person trying to sell me?" would be the immediate reaction, to be met with embarrassed silence on the other side.

Everyone in the room felt they have to find a way round that barrier so that they get the benefits of the lean approach. It is a real cultural barrier, compared with cultures like the United States where people are all too keen to share what's bothering them with anyone who will listen.

We have met it before in Asia, for various reasons – in places like China where everyone's afraid of competitors, or Vietnam where it just seems rude. 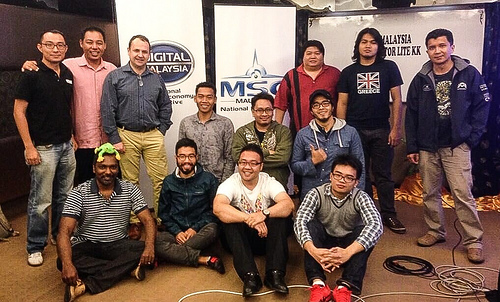 We tried to think of a workaround. Perhaps getting someone you know along with a friend, who is actually the person you want to interview, could be a solution?

Finding a shared interest is a quick way to establish trust, startups in KK told us. But it all has to be done sensitively, because friends can be wary of introducing their contacts for fear that a relationship which later goes wrong could reflect badly on them for making the introduction.

I personally find understanding these cultural issues one of the most fascinating aspects of our work at JFDI. I brought my family to Asia from the United Kingdom because I like learning about different cultures. I wanted my son to grow up understanding Asia, a part of the world that feels to me where the future is unfolding fastest. New technology is everywhere.

Yet of course, culture can take decades to catch up with.

Often it seems that culture changes fastest when people with different outlooks come together. That's why events like Webcamp KK (click video below) are so valuable. They connect people interested in ideas, and they draw in outsiders who can share a fresh perspective.

On that note, many of the local startups taking part in our workshop came away realising how much they might gain from international connections if they led the way locally to make more use of LinkedIn. Connections really are the key because, online, a different kind of economics holds sway.

A real-world island like Borneo has limited resources. If I claim land for myself, you can't have it. Yet online, if I build a service, you can connect yours to it through an API (application programming interface) and together we can offer the world something bigger than either of us had before.

Instead of looking at the other guy as a potential competitor, perhaps we can both gain by working together. We also spoke about the way that technology opens up new opportunities. Traditionally, in a place like Sabah, if you are lucky enough to be born into a family with assets like a plantation, you automatically have wealth. But the Internet opens up a new frontier for pioneers: it's a plantation for ideas, open to anyone with an Internet connection and the willingness to learn and experiment.

Technology changes the balance of power and often opens up opportunities for a new generation. It always has done. The conversation in Sabah reminded me of a picture I came across in my grandfather's photo album (pic).

My ancestor Harry Minton was born on a farm but went on to become (for a very short while) a champion sprint cyclist, riding a machine he made for himself. Bicycles were, for his generation, like smartphones are for young people today. They give you connections. Get on a bike and you can meet and marry a girl in the next village, not just the place where you grew up.

One hundred and forty years ago, Harry and his brother 'did a startup'. They opened a shop where they made, sold and repaired their own bicycles.

They were part of a new generation of 'mechanics' – the geeks of their day – who were often born into traditional farming communities but were inspired and empowered by the new technology around them to change their world.

From the 1820s onwards, people like Harry Minton gathered in thousands of 'Mechanics Institutes' that were built around the world to share new insights into engineering, electricity and general technical 'know-how.’

These places were the equivalent of today's 'Hackerspaces' like the one I wrote about last week, which helped to kickstart Singapore's startup scene in the last few years.

Much as in Penang, by the time we left, the startups we met in KK were coming to the conclusion that somewhere where they could get together regularly just might be the key to making their community flourish.

I hope they do because I get the sense that if they show that there's a will amongst people locally, corporate and government sponsors would very likely help them grow.

The pieces are here already