IF you were to ask William Lee (pic), how he ended up founding his own startup after clocking in over 10 years navigating the corporate jungle, the first answer would be pretty simple.

“Out of desperation!” he quipped in an interview with Digital News Asia (DNA) about 3editions, a new online art gallery seeking to offer a platform for artists to showcase their work and offer enthusiasts an affordable way to acquire art.

The real answer though, is a little more involved.

“I have always wanted to start my own business but have struggled with coming up with an idea for a business that is fuelled by passion. For the longest time, I searched within myself and asked: ‘What am I passionate about?’ and could never seem to find any answers,” Lee recalled.

In 2003, he had an initial idea to bring in movie posters from all over the world and frame them to sell to movie buffs and enthusiasts.

He had stumbled upon a shop offering such products in Johor Baru and thought it could also work in Kuala Lumpur.

“Sadly at that time, I wasn't surrounded with good support and never pursued it. Furthermore, friends advised that it was too niche a market to cater for, which made sense to me as a marketer,” he added.

Many years later, Lee realised that he loved art and design, or rather, anything to do with creative work, and made the decision that if he was going to start a business, it would have to be in that particular field.

He drew up a 'mind map' of ideas and began fleshing out his business during the weekends and after work. After a few months, armed with nothing more than a hunch and a working paper, he quit his fulltime job and dived headfirst into the role of entrepreneur.

“I had nothing concrete ahead and was relying on the ‘do-first-think-later’ mentality,” he said.

Lee spent the next few months researching, talking to relevant people, fine-tuning his business plan and developing the brand and website now known as 3editions.

“It’s self-funded and with the help of my family at the moment. We haven't gotten to a stage where we can talk about equity for a startup,” he added. 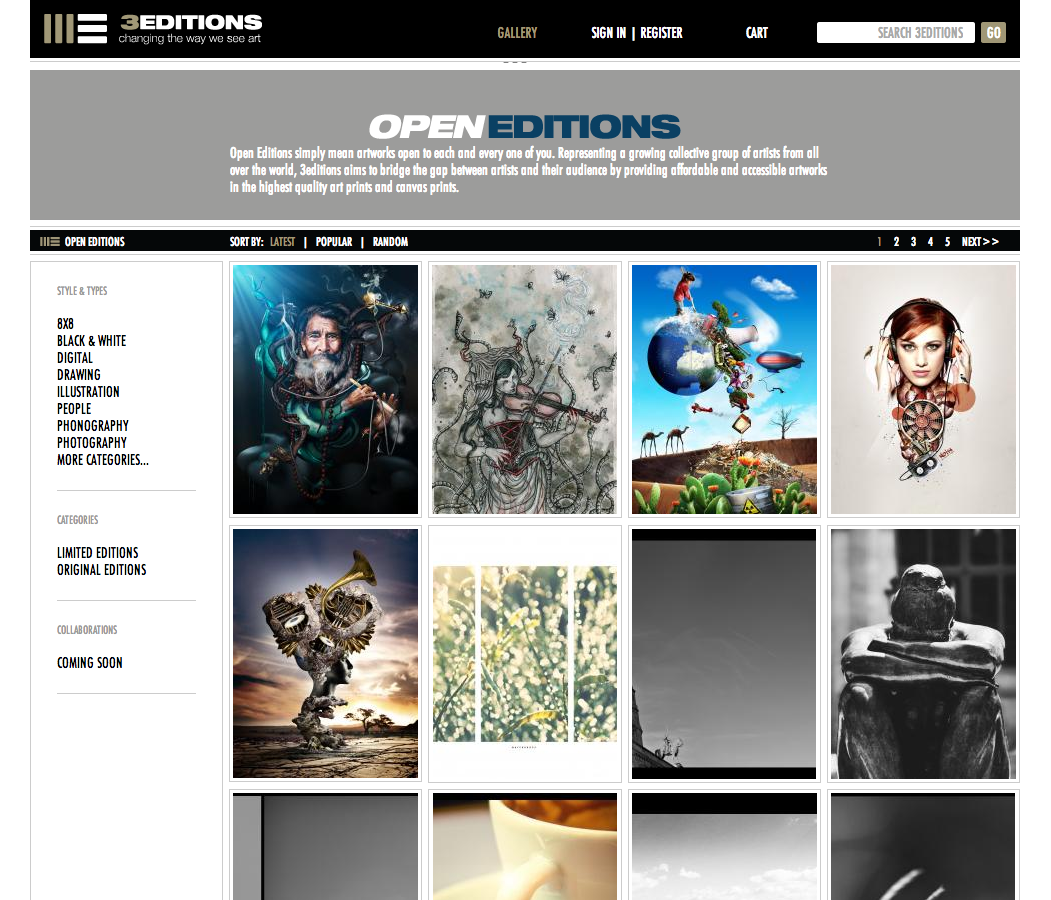 3editions, which went live in late May, is a contemporary online art and design gallery which offers everything from affordable art and canvas prints to exclusive fine art pieces, by artists around the world.

“The concept is simple. Make art affordable and accessible, providing artists a space to showcase their work to everyone, and make some money from their own work,” he said.

According to him, Malaysia boasts over 50 years of art history but remains nowhere in the global art scene.

“That is rather sad. I see struggling artists trying to make a living, gallery owners giving preference to certain artists and agents squeezing out discounts on our artists and selling their work overseas for exorbitant prices,” he said.

He added that the situation is a complex one with obvious issues such as lack of government support, lack of freedom of speech through art, lack of world-class museums and galleries, and very importantly, the lack of collectors and enthusiasts.

“Promising and emerging artists are hungry for platforms to showcase their work, let alone make money out of it. Galleries today lack proper funding to hold exhibitions regionally and globally as well,” he said.

“Most Malaysians also have the perception that we lack talent in art; art is not for them; or Malaysians don't appreciate art, which isn’t true. I believe we just lack education and aspiration behind the industry,” he added.

This is the market gap and problem 3editons seeks to solve, by becoming the authority for prints and original art pieces among local consumers, as well as to bridge the gap between artists and consumers.

When asked about competition in the market, Lee reported that as far as Malaysia goes, there are a few small players that have started selling prints as art, but they have tied themselves to furniture retail outlets and sell only a handful of prints, such as Outdated located in Publika.

One of their notable suppliers is a local website called New Oral Asia selling art prints and posters; however they deal mostly with international artists, not local ones.

“If I had to pick a competitor, IKEA would be a close one as they do sell artworks at a relatively affordable prices,” he said.

Next page: Framing the picture