THE best thing that happened to Sivamani Varun – “a great experience,” he calls it – was the year he spent in Silicon Valley in a work-study exchange program run by the National University of Singapore.

It was more a work program with some computer science and entrepreneurship courses thrown in at Stanford University. Varun worked at a startup called Chai Labs which was later acquired by Facebook.

It was the entire experience of being in Stanford and Silicon Valley, locking brains with very smart people from different parts of the world, that opened his eyes to what global competition was about. 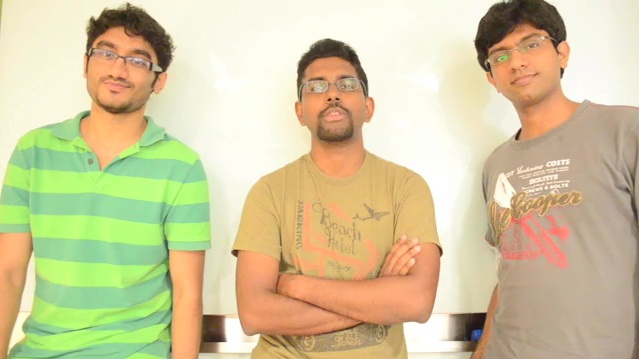 “It was even ego bruising,” he admits, but adds that it also helps one to reflect on one’s own shortcomings. He came back to Singapore with a keen appreciation of the type of competition that was out there.

Not surprising then that he set up his Singapore big data startup Semantics3, with two other co-founders who also spent time in the same program (pic, left-to-right: Vinoth Gopinathan, Sivamani Varun, Govind Chandrasekhar).

A fourth, who just graduated, joined them a few months ago. “We subscribe to the philosophy that more data beats fancy algorithms,” says Varun of the company that was set up last December.

It was initially just a consulting company until they noticed something interesting. “No matter which vertical the customers were in, they all seemed to want the same three broad categories of data -- revolving around people, places and products. So, we decided to productize our consulting work,” he adds.

As part of the process to sharpen their own competitive edge before they launched their product, Varun took part in Demo Asia in March in Singapore. Semantics3 actually had to compete with other Singapore startups to get the chance to showcase its solution at DemoAsia.

DemoAsia is the Asian version of the US-based Demo where startups vie for the privilege of launching their products at the event which attracts angel investors and venture capitalists. Although they did not attract the interest of any investors there, Varun and his mates were undaunted.

It helped that they were already making money from their consulting business but their success there took a toll on their analytics product as they could not devote enough time to it. After all, there were just the three of them in the company.

They applied for a government grant of S$50,000 – the SPRING Yes! fund, which came though this past June, two months after they applied.

“We locked ourselves away for six weeks after the grant came in to finish our data API (application programming interface),” says Varun.

The good thing about the SPRING fund is that it is given as a grant, hence the founders have not given away any equity. Varun, as the main founder, has a simple majority in equity.

Semantics3 is currently in closed beta and has around 40 companies keen to try its solutions. Three are already paying customers but Varun is finding that big companies have their own pace and way of dealing with payments to smaller companies like his.

The following Q&A delves more into what Varun is trying to do with Semantics3 and his own learning curve as an entrepreneur.

DNA: What is your education background?

Varun: I hold a Bachelors in Engineering from the National University of Singapore.

DNA: Where have you worked before and what is your domain expertise?

Varun: Prior to this I interned at a Sillcon Valley startup called Chai Labs, which was later acquired by Facebook. My final year thesis was on information retrieval and extraction, which helped lay the theoretical foundations for the technical stuff we now do.

DNA: What problem are you trying to solve and what is your motivation for wanting to solve this?

Varun: The problem we are trying to solve is in making it useful for businesses to tap the large amounts of structured data that is available on the Web.

Many companies hire people to manually collate and build spreadsheets on data available on a particular site (say for example, building a spreadsheet on Amazon's prices for Apple products).

We believe that we can do it at a fraction of the cost and at massive scales allowing for companies to focus more on the analytics of the data rather than curating it.

DNA: Describe your product and why is it different from what exists in the market?

Varun: We provide a data API allowing customers to tap into large amounts of data related to products, people and places. The key difference is that our data is constantly updated -- sometimes many times a day.

For example, if the price for the iPad has changed in Amazon.com, it would be reflected in our data API within a few hours.

DNA: When did you launch Version 1 and how is the current version different?

Varun: Our Version 1 was an online data marketplace. We are still running it but since then we've launched an API and we're focusing more on this now. Our data API allows customers to get constantly updated data since programs that use it just need to refresh to view the updated data.

Previously we adopted a breath-first approach, aggregating and curating data sets across diverse areas. But now we have shifted to a more depth-first approach and are just focusing on building large data sets on mainly three target areas -- products, people and places.

DNA: Where is your funding from and how much equity do the founders still hold?

Varun: We are currently incubated by NUS Enterprise, the venture arm of my university. They provide us with office space, accounting and other support services. We are also government-funded being part of the SPRING Yes! fund (they don't take equity). We currently hold full equity.

DNA: How is the funding environment in your country?

Varun: I think it’s really good and most importantly it’s very transparent. If you have a prototype and are seeing some traction, I think it shouldn't be too hard to secure funding in Singapore.

Varun: I like dabbling in completely unrelated side projects and speaking with people from different areas. Not only does it give new perspectives, it also allows you to get out of your shell and refresh your mind. I think running a company is like running a marathon, not a sprint.

DNA: What expertise does your team have?

Varun: We have technical expertise with dealing with big quantities of data and also in running large scale infrastructure. We are only a four-person team (including me) and we run a completely automated 35-node computing cluster and deal with close to a petabyte of data.

Varun: The biggest lesson I have learned is the value of patience. Being a perennially impatient person, this has been a hard one. There is an old Tamil proverb which I would like to share. It says 'பொறுத்தார் பூமி ஆழ்வார்' (poruthaar boomi aalvar). It means those that are patient will one day rule the world.

DNA: What has been the toughest challenge so far?

Varun: I think the toughest challenge certainly has been on staying focused on the goal at hand. It’s so easy to get distracted, especially with all the 'overnight success' stories that keep coming up on the various tech blogs.