What makes for a good business laptop? For some it is about power, others security and still others practicality.

The Lenovo ThinkPad X1 Yoga ticks all the right boxes of features a business executive would want in a work laptop and then some.

Sleek, slim and stylish, the X1 Yoga closely resembles Lenovo's excellent X1 Carbon laptop, which in themselves are great pieces of hardware.

In the same vein, the X1 Yoga maintains the no-nonsense aesthetics of the ThinkPad series sporting an all black design with red accents that suit it very well.

With a carbon-fiber lid and body made from magnesium, the X1 Yoga feels very light and feels solid compared to many other ultrabook class laptops.

The X1 Yoga has a great degree of flexibility, no pun intended. As a 2-in-1 convertible, it takes on the quality of Lenovo’s transformable Yoga series, adding a touchscreen and a 360-degree hinge.

It can be used in four different modes: as a standard laptop, a tablet (when the keyboard is folded all the way back), a tent (propping it in an upside-down V) or as a display (with the keyboard facing down and the screen pointing up). (perhaps can display this in pictures, easier to see). 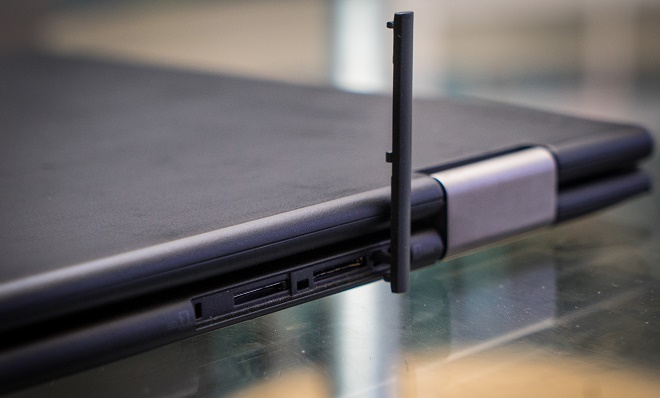 I found it especially thoughtful that the keys actually retract when you fold it all the way back so that the keys don’t trigger when you use it as a tablet.

It is good to note that the X1 Yoga maintains some input/output ports with three USB 3.0 ports along the side, a Mini Display Port for connecting your laptop to a bigger monitor. There is also a microSD card reader that is covered by a flap on the rear of the laptop (pic above). As a business laptop, safety and security can be very important as you may have sensitive information stored on your laptop.

Fortunately, the laptop comes with built-in security features like a fingerprint reader that you can use to unlock the laptop with a single tap of your finger.

The fingerprint sensor not only adds an additional layer of security but it also makes it convenient to unlock your laptop in just a second with a simple tap of your finger.

The X1 Yoga is a tough little laptop that can withstand knocks and even spills. Lenovo claims the laptop can is even dust and extreme temperatures.

Meanwhile, the keyboard is not only great to type with, I consciously felt that typing speed was quicker than normal, but it is also spill-resistant so don’t worry even if you spill a drink on it.

Another unique feature of the X1 Yoga is a handy little rechargeable stylus that you can pull from under the right side of the notebook. This will definitely come in if you are a creative individual who often uses Photoshop or other drawing programmes to express your creativity.

However, from a business standpoint, the stylus is better suited for making handwritten notes or sketches on graphs if you are into that sort of thing. Else, you may find it has rather limited usage for you. Fun but not absolutely necessary. Underneath the hood, our review unit came with an Intel Core i5 processor with 8GB of RAM and a 256GB Solid State Drive.

Putting the X1 Yoga through its paces, the X1 Yoga performed well and we had no trouble using it for typical day to day work like browsing the web for research, checking emails, writing stories on Google Docs and light photo editing with Affinity Photo.

The X1 Yoga scored slightly below average according to our PCMark 8 Work Conventional 2.0 benchmark test scoring 2,644. That being said, benchmark scores are not everything and I did not have any major issues with its performance.

It is worth mentioning that the X1 Yoga’s 14-inch WQHD touch display boasts an incredibly high-resolution display with crisp looking text and images that made both work and entertainment especially enjoyable.

We have to say that the ThinkPad’s keyboard feels really great. It is a full sized keyboard with well spaced out island keys that are very comfortable when typing.

It is not just the keyboard that feels comfortable but the touchpad is sufficiently large and offers a great navigational experience with it. Whether we were traversing a webpage or scrolling through documents, the two finger scroll and three finger swipe all felt great.

Then there is, of course, the ThinkPad’s TrackPoint nub in the centre of the keyboard. Though uncommon on most laptops, this is a staple feature on business laptops. I personally never got used to using nubs to navigate around the desktop.

The only qualm I had with the X1 Yoga was that it ran a little warm so it feels uncomfortable if you are using it on your lap over long periods of time. Also, the 256GB of storage may feel limited if you are using this as your primary work machine.

When it is time to let loose and play some games, the X1 Yoga’s modest  Intel HD Graphics 520 integrated graphics definitely won’t be impressing any hardcore gamers.

We did, however, manage to play Civilization VI well on the laptop and it runs quite smoothly which isn’t bad considering it has lots of replayability.

For something quicker, we tried the 2016 release of classic first person shooter DOOM, however, the game proved too much for the X1 Yoga’s integrated graphics to handle and was practically unplayable.

However, Valve’s own Left 4 Dead 2 ran smoothly on the laptop with just a minor slow down when there were many zombies swarming us at once.

The X1 Yoga’s battery life is average according to a PCMark battery test, lasting just 4 hours of continual use.

While this may sound rather short, in actual real world use I didn’t find this to be too limiting as I still managed to get some surfing, writing and emails done before needing to search for a power socket. With a hefty price tag of RM9,799/ SGD3,249/ IDR 21 million, this is a pretty pricey Ultrabook but you get what you pay for, though for the same amount of money you could buy a very high-end gaming notebook.

Lenovo certainly has thrown in a lot of great qualities to justify the high price point of the X1 Yoga but if you are constantly on the go and need a dependable yet durable laptop, this is a great option.

You get great build quality, a killer looking 2K resolution screen along with plenty of additional features that range from the touchscreen, stylus, spillproof keyboard, finger reader. The works literally.

I have to admit that specification wise, the processor you are getting and sole SSD storage (without an option for a regular HDD) are not outstanding for such a highly priced Ultrabook but again this is mostly due to the extra features that Lenovo has included.

But it doubles up as a great entertainment device if you like to binge watch Netflix on the go or play strategy games like Civilization VI.

So if you can afford it, the X1 Yoga certainly is nice work laptop for the serious business user who values portability and durability above all else.