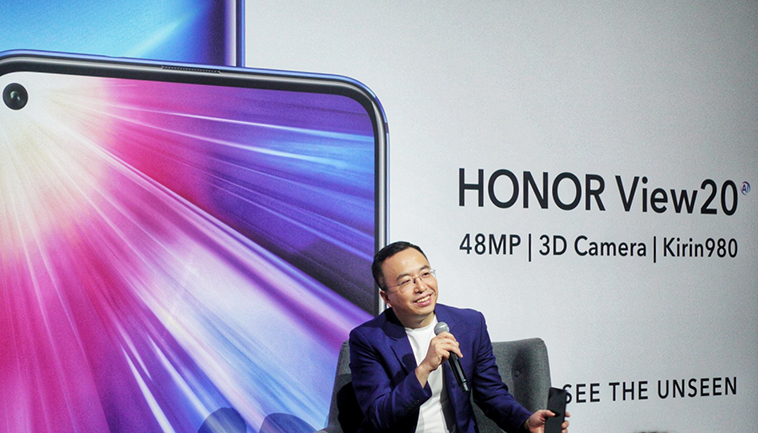 HONOR, the sub-brand of Huawei, has set a high bar for itself as its president George Zhao (pic) said that the brand is aiming to challenge the global top five smartphone brands and it wants a seat among the top three players within the next five years.

Zhao made the announcement during a briefing after the launch of its latest flagship phone, the View20 in Paris, France to a packed room of journalist from multiple countries. According to him, 2019 will be an important year for Honor as it is the middle year in the implementation of its strategy to challenge the top smartphone players.

To achieve this ambitious goal, Honor said it intends to deliver quality products at attractive prices that meet its customer’s requirements. He also commented that Malaysia remains one of the key markets for Honor in the region. In fact, it is among the few countries in the region to receive the View20.

In terms of performance this year, Honor said that it is banking on its ability to innovate greatly and produce quality products that will appeal to its core demographic, young people.

Honor is also not backing down from challenging incumbents like Apple. During the View20’s global launch, Honor made a number of comparisons to the iPhone XS Max and how the View20 was able to surpass the high-end Apple phone on several fronts, particularly the camera.

A side-by-side test was performed where both phones snapped a photo of a newspaper. The results showed that the View20’s camera was able to capture a clearer image of the words on the newspaper.

So why has Honor opted for a 48-Megapixel camera on its latest flagship model instead of a three-camera array? Zhao responded that Honor wanted the View20 to bring out the clarity in photos for its class of smartphone.

He confidently stated that Honor has set its sights on setting a high benchmark for other smartphone makers in 2019 with the View20 launch acting as its opening salvo.

“After the Honor View20, many other vendors will follow in our direction just as we launched the Honor Magic 2 years ago ushering in the age of the AI era of smartphones,” he said.

He finally commented that Honor has come a long way since it started as a purely online company and the brand has since “upgraded” itself, sporting a new identity with a logo that features gradient colours just like its the patterns on the back of its iconic smartphones.