IF you’ve read our recent Elephone P7000 review, it’s clear China-branded smartphones have upped the game in terms of quality and value for money.

The Ecoo E04 Aurora is probably the lowest priced mid-range phablet we could find under US$190.  The company Ecoo emerged in 2013, and was acquired by rival Elephone late last year.

Confirming the acquisition to Digital News Asia (DNA) in an e-mail, an Elephone representative said that the Ecoo team operates separately. For the money, the E04’s specifications look impressive. Let’s compare Ecoo’s device to Elephone’s P7000 to illustrate our point.

Many of the specifications are identical. And while the E04’s cameras have higher megapixel counts, it employs an earlier generation swipe-style fingerprint scanner and has a lower capacity battery (though not significantly smaller).

Yet the cost savings of US$45 or almost a 20% discount in price is pretty significant. What possible corners did Ecoo cut in order to achieve this kind of price point?  Let’s find out. In terms of build quality, Ecoo’s phablet is decidedly average, its fully plastic body outlined by gentle curves at the top and bottom, and relatively sharp corners.

Size-wise, it’s on the longer side for a 5.5-inch device, partly due to the larger lip below the screen. But the side bezels are thinner than some of its competitors, so it still felt comfortable in the hand. The removable back cover is thin and bends easily, although it does clip securely to the chassis, and comes with a carbon fibre-inspired texture design. The rear camera, outlined with a red ring, sits at the top while a dual-tone LED flash (a surprising addition considering the price) is placed below the lens. 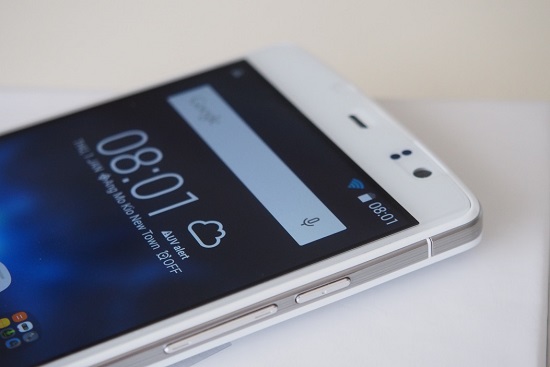 The power key is positioned just above the volume rocker on the right side, which was less than ideal. Annoyingly, we often pressed the volume key instead of the power key. The physical ‘home’ key below the screen doubles as a fingerprint scanner, and it’s flanked by two backlit capacitive keys on the sides, with the ‘menu’ key on the left and the ‘back’ key on the right. There are two speaker cut-outs at the bottom for symmetry purposes, since the sound only emanates from one of them. We were pleasantly surprised by the 5.5-inch display. The outer layer is curved at the sides, similar to the iPhone 6 (also known as 2.5D glass), providing a more comfortable experience when swiping from the edges.

However the screen isn’t protected by any proprietary hardened glass, so we would recommend using a screen protector.

Ecoo fitted the E04 with a Full HD (1920 x 1080 resolution) IPS (in-plane switching) panel, equivalent to 403 pixels per inch. For this price, that’s absolutely great value and one of the phone’s highlights.

The colours are rich without being over-saturated, and the brightness level is satisfactory in all situations.

It also comes with Miravision technology, which lets you adjust the colour balance to your liking, so you can easily enhance the colours if you so wished. The cameras in contrast, are nothing to shout about. Despite having a higher megapixel count than most devices at this price point, the image quality is sub-par. The auto-focus was slow, so we usually just tapped to focus on our subject. The colours turned out fine, but it was hard to get a completely sharp image. The pictures also tended to be a little noisy.

The camera software is pretty basic, but it does let you switch to HDR (high dynamic range) mode very easily. The difference between HDR and non-HDR shots is also quite obvious (pic below).

The front camera also suffered from a slight sharpness issue, but otherwise was acceptable.

Powered by MediaTek’s highly capable (and popular) 64-bit octa-core chipset MT6752, the Ecoo E04 certainly has the raw power and graphics processing capabilities to handle any task effortlessly.  There was no sign of lag, and apps and games, as well as the browser, loaded very quickly.

The unit we purchased came with 3GB of RAM, and this is worth noting because Ecoo had earlier sold a variant that came with 2GB of memory. With the extra gig of memory, we were able to have more apps running in the background without slowing down the device.

We’re quite certain the performance would be even better if it was running on the 64-bit capable Android 5.0 Lollipop software. Unfortunately, our device was preloaded with Android 4.4.4 (KitKat) instead.

Ecoo offers the latest version of its Android through its website, but there are a number of reports and forum posts saying the Lollipop version is still buggy. Having downloaded and updated the unit ourselves, we can say that the KitKat software is a lot more stable.

To upgrade the device though, you would need to be familiar on how to ‘flash’ Android smartphones using PC-based software tools (or watch instructional videos on YouTube), so it’s hardly consumer friendly.

But if you’re an Android aficionado, we’re glad to report that there are quite a number of customised software images for the device. Fortunately the biometric sensor is decent. The swipe-style fingerprint scanner on the front of the device is built into the ‘home’ button and works reasonably well, as long as you swipe according to how you registered your fingerprint. It’s definitely faster than typing in a PIN or password, and you can also set different fingerprints to open up apps automatically. Ecoo also included other software enhancements (typically this comes as part of MediaTek’s chipset software package) like using screen gestures to unlock the device or activate certain apps (like the camera or music player).

But here’s the big bummer: Somehow the thermal protection on this device seems to have gone missing, causing the phone’s temperature to rise to an unacceptable level, especially when using navigation software like Google Maps or playing games with 3D graphics.

As such it was difficult to test the battery life, because the software would prompt us to remove the battery due to high temperatures whenever we started using it intensively. We didn’t want the smartphone to experience a meltdown, so we promptly switched it off.

If the E04 didn’t suffer from overheating issues, there is no doubt this smartphone would be a contender for the best overall value title among devices launched in 2015. The display, processor and fingerprint reader are all great reasons to own it.

Unfortunately it’s hampered by average quality cameras and a ‘plasticky’ build quality, as well as that aforementioned overheating problem.

Until a fix is found for this particular issue, we can’t recommend buying the E04 just yet.