OFFICIALLY designated as a variant of the HTC M9, the HTC One M9+ has an impressive set of specifications that surpasses its sibling in almost every way.

Intended for sale in emerging regions, specifically Malaysia, India and Thailand, the One M9+ bears similar looks to the One M9, though there are subtle differences.

The One M9+ is slightly larger all around by a few millimetres, while weighing slightly more at 168g compared with the earlier M9, though it retains similar aesthetics.

The chassis consists of a unibody aluminium casing polished to an exquisitely beautiful metallic sheen, with the HTC logo emblazoned on the back and a lighter coloured polycarbonate swatch banding the top and bottom of the phone for better cell reception.

The design isn't revolutionary – in fact, it’s rather conservative seeing as it looks somewhat similar to its predecessors the M8 and M7, though HTC is following the adage of ‘if it ain’t broke, don’t fix it’ on the One M9+. 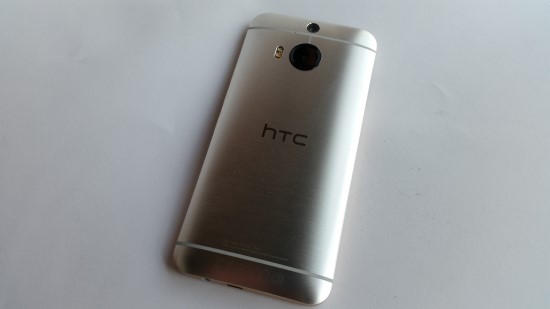 Our review unit had a brushed aluminium silver finish and an understated gold band around the edges. The finish feels wonderfully premium when held, and this extends to the metal hewn buttons.

The backplate itself and the battery are non-removable, with access to the microSD card slot and SIM card slot via sealed ports that will require a paperclip or hairpin to open. At both the top and bottom of the phone are HTC’s front-facing BoomSound speakers, this time enhanced with Dolby Audio technology.

The UltraPixel camera used to take pride of place on the rear of the HTC One M7 and One Max released a couple of years ago. The power button itself, located on the right side of the phone has a slight knurling to make it easier to feel by touch while the volume rocker, located just above it, retains a smooth finish.

While it is indubitably sensuous to the touch, the One M9+ is slippery to hold and you’re likely to drop it if you’re not careful – more so if you’re holding it with wet hands.

The front facing 5.2-inch 565ppi touchscreen provides luscious images and pin-sharp text, as well as an excellent image even when viewed at an angle.

The brightness is sufficient for viewing even under daylight conditions, though there are no options – barring brightness – to tweak colour adjustments to your liking.

The rear of the phone is host to a 20-megapixel Duo camera with dual LED flash, an f/2.2 aperture and a depth sensor like the earlier HTC One M8 that allows for either shots at 20-MP high resolution or Duo shots at 4-MP that enable you to practise a selective defocus mode after taking a shot.

The rear camera lets you swap between either Duo or High Resolution mode at will, along with the ability to tweak exposure values, ISO and white balance – although auto mode does a reasonable job of judging the right settings.

High Resolution mode gives you more options to play with including a night mode, HDR, Portrait (for shooting picture) and Landscape (for shooting scenery) modes.

You’re also able to download additional modes in future with HTC mentioning the ability to shoot in RAW, though when this will be available locally hasn’t been confirmed at press time as yet. The defocus mode on the rear camera needs some distance to work – at least 30cm from a subject at the minimum – along with a suitable foreground. You're able to dial the depth of defocus as well with generally good results. Image quality on the camera is generally good, with lots of detail in High Resolution mode and with the best results achieved under daylight conditions.

Low-light shots end up with quite a bit of noise, with Auto mode veering towards very conservative settings. You’ll need a steady hand and some occasional adjustments to get best results. The front UltraPixel camera lets you take selfies and has a slider that allows the degree of beautification required when taking a shot.

If you slide it all the way to the right, you have skin tone worthy of a supermodel – though your mileage may vary as to how realistic the effect is, depending on the age of the subject. Younger to middle aged subjects are generally easier to smooth over.

The One M9+ has specifications worthy of a flagship phone with its 3GB RAM and 32GB of storage. The phone also bucks the recent rising trend of omitting microSD cards in flagships spearheaded by some vendors, and comes with a welcome microSD port on the side.

Users can also get a free 100GB of cloud storage on Google Drive for two years bundled with the phone.

Where it differs from the M9 and from many competing flagship phones is that it opts to use a MediaTek Helio X10 64-bit octa-core processor running at 2.2GHz, rather than a Qualcomm SoC (system-on-chip) or an inhouse solution like Huawei’s Kirin processor.

While the MediaTek Helio doesn’t have the distinguished pedigree that Qualcomm’s Snapdragon processor series has, it managed to hold its own in conventional usage scenarios and still crunches comparably respectable performance in benchmarks.

As an entertainment device, the One M9+ has an edge with its front-facing stereo speakers that remain one of the best in the industry.

Paired with the Quad HD screen, the One M9+, with a suitable stand to prop it up, made for a pleasant experience for watching streamed videos on YouTube.

One minor downside is that the One M9+ only supports Cat 4 LTE (Long-Term Evolution), unlike the earlier M9 that supports up to Cat 6 LTE, although this is an admittedly minor quibble for Malaysian users.

Music playback on the phone’s BoomSound speakers was loud enough to fill a small room without distortion at maximum volume, and relatively detailed enough to handle most musical genres. Entertainment duties aside, the phone was able to handle run some two dozen apps, several of them guilty pleasures in the form of casual games like Clash of Clans, along with an open copy WPS Office, without any lag at all.

With relatively heavy use with the screen set on automatic brightness adjustment, data on all day, phone calls, heavy social media use and some light gaming, the phone managed to last the better part of a day – although your mileage will vary depending on screen brightness settings and other factors.

There are incremental improvements as can be expected, with the biggest one being the option to create and customise your own themes to tweak the phone to your liking. The phone ships with a few stock themes and you’re able to create and customise your own by basing them on a picture. Once you snap a picture and select it for inclusion in a theme, the UI will select the dominant colours from the picture as part of the new theme and from there, you’re able to select what icons and ringtones to use as well.

It’s a rather time-intensive task but offers very fine-tuned ‘customisability’ for owners – though you can also download themes from other users and official ones from HTC as well, if you’re not up to it.

The new Sense 7 UI also sports a new Sense Home widget that recommends apps that it think would suit you, and attempts to present to you the right apps at the right time, subdivided into Home, Work and Out folders. Another new addition to Sense 7 is the inclusion of Zoe, now relabelled as a social app, that lets you compile short vignettes of pictures, with music formatted via a selection of preset editing templates that you can share with others within the Zoe app.

You’re able to share these Zoe vignettes on Facebook and other social media, although the Zoe vignettes themselves are in a proprietary format that does not allow for download. Accessing and viewing them requires you to log on to HTC’s Zoe server.

HTC’s Blinkfeed, which aggregates content of interest from websites onto a Flipboard style interface, is retained here and lets you view subscribed websites and the news of the day at a glance.

Accessing and unlocking the phone is a cinch on account of the improved fingerprint sensor on the front, that accepts up to five fingerprints. There’s no onerous swiping required and you simply have to place your finger to gain access.

In the premium flagship category, the HTC One M9+ delivers good value for what you pay for. For RM2,599 (US$693) you get a beautifully finished chassis, a pleasant Sense user interface, and flagship-level hardware with expandable memory and a fingerprint sensor in the bargain.

If you’ve been on the fence on whether to get an M9 or the M9+, the One M9+ is the better choice.