Xiaomi isn’t the only Chinese hardware manufacturer that has global ambitions. Thanks to its phenomenal success, we’ve seen a raft of copycats from China emerge from the factories of Shenzhen to take on the big boys with impressive hardware at market-disrupting prices.

As such, we decided to put two highly capable ‘Note’ products side by side through our DNA Test to see if these sub-US$180  devices are worth your time or dollars. In the Blue corner, we have the Xiaomi Redmi Note 4G (pic, above), a 5.5-inch Android smartphone that was released late last year in Malaysia and Singapore, available for S$229/ RM625 through Xiaomi’s official website. In the Red corner, a new challenger appears! Introducing the Mlais M52 Red Note (pic, above), a 5.5-inch Android device that launched recently and goes for just US$160. That’s equivalent to around S$215 or RM580, available from a selection of online stores that ship the device from China.

We chose to compare these two based on very simple reasons: They cost roughly the same, they have a 5.5-inch HD display with a 720P resolution, and both have the word ‘Note’ in their names.  We’re suckers for marketing names, we suppose.

On to the fight, then!

Round 1: Branding (or the “What phone are you using?” category) Both Xiaomi and Mlais have brand names that are equally challenging to pronounce. At least in the case of Xiaomi, it’s well-known enough that we have an idea – but Mlais, being an unknown brand outside of China, is completely perplexing. We’re not sure whether to call it ‘m-lays’ or ‘malaise’ or ‘m-lice.’

Thankfully both products have easy sounding names, even though they are a mouthful.

Winner: It’s a tie – no one needs to know we’re using budget phablets, in case we get judged.

Since the Redmi Note’s design has been out for about a year (if you take into account the previous 3G version of the Redmi Note), it’s safe to guess that the designers from Mlais took a holiday and lifted the design pages off Xiaomi’s popular phablet.

Mlais in fact, references Xiaomi’s device with the model name (Red Note vs. Redmi Note), just to ensure that you know which smartphone it was trying to clone.

At first glance, you would think they’re both the same phone. Size and weight-wise, they are almost identical. Even the placement of the rear camera and LED flash at the centre, or the logo at the bottom of the back cover, are the same. Other similarities abound. The way the back cover tapers off at the sides (pic, above), creating a slight curvature at the edges, and the size of the bezels (thicker compared to many of the new devices hitting the market today) are almost like for like. There are some slight differences. The Redmi Note’s power and volume buttons are positioned on the right side of the unit, but just a tad too high up to be comfortably reached (pic, above). On the M52, the power button is on the right side, while the volume rocker is on the left, but they are equally as hard to reach (pic, below).

In terms of materials, both are primarily made from plastic with a glass front on the display, but Xiaomi’s phablet still wins in terms of the feel.

The glossy plastic finish on the Redmi looks more premium and feels better compared to the M52, which employed a matte plastic finish instead. The Redmi Note’s buttons also provides better tactile feedback. The winner for this round then goes to Xiaomi since the M52 Red Note is a blatant rip-off.

Round 3: Hardware and display

Cloning popular devices is not an uncommon practice among Chinese manufacturers, so no one should be surprised.

What is surprising however is that Mlais decided to incorporate a higher level of hardware specifications in the M52, rather than coming up with a cheap clone alternative to undercut Xiaomi. The Redmi Note 4G is powered by a Snapdragon 400 quad-core processor running at up to 1.6GHz – it’s a chipset that’s sits at the lower end of the mid-range series from Qualcomm. It’s backed by 2GB of memory and 8GB of storage, along with a microSD card slot for additional storage. The M52 on the other hand, runs on MediaTek’s 64-bit MT6752 chipset, an upper mid-range octa-core processor that performs at up to 1.7GHz and produces benchmark scores that exceed even Xiaomi’s own high-end product last year, the Mi 3.

The other obvious difference of this chipset is the dual SIM capability, supporting a full-sized 4G SIM and a 2G micro SIM card concurrently. Additionally, it has double the storage capacity at 16GB, although the memory capacity is identical at 2GB. It also has a microSD card slot.

In terms of the display, both use a similar 5.5-inch IPS panel that provides very good viewing angles, although the Redmi Note’s has a warmer sheen and richer colours compared to the M52. Both their screens have a HD resolution of 720P (1280 x 720) which translates to around 267 pixels per inch (PPI).  The brightness is great and sharpness is just about acceptable for this screen size, but considering the sub-US$180 price point, a Full HD display would be asking too much.

The benefit here is that a 720P display doesn’t suck up as much power, so you’ll likely get better battery life on these units. Speaking of which, the M52 Red Note comes with a 3200 mAh battery while the Redmi Note sports a 3100 mAh battery. The difference in battery life, however, is insignificant – both devices will last you slightly more than a day in normal usage, or about a full 10-hour day under intensive use. Picking the winner for this round is easy: Thanks to the faster MediaTek chipset, more storage and battery capacity, the M52 overcomes the Redmi Note in terms of sheer numbers, even though Xiaomi’s device has a superior display.

Benchmarks-wise, there is no competition as the M52, coming out half a year later, with a more powerful chipset, simply smokes the Redmi Note. That being said, when it comes to actual usage, there’s little to no difference when it comes to making calls, listening to music, messaging on Facebook and WhatsApp, editing photos or files, and web-browsing.

The Snapdragon 400 performs admirably well, and all of the apps we used worked without any hitches.

However, there were some games like Namco’s Ridge Racer Slipstream that saw framerates drop significantly halfway through the racing course, and Ubisoft’s Rayman Fiesta Run ran too slow to be enjoyable.

Things improved when we switched it to ‘Performance’ (in the battery settings) from the default ‘Balanced’ mode, but it’s an annoying extra step.

Games performed a lot better on the M52, although we noticed that it ran a little hotter than the Redmi Note.

The main issue with the Redmi Note is the lack of built-in storage. We often came across the ‘Insufficient storage’ error message whenever we tried to install more apps into the device. This is even when we had a 32GB memory card inserted in the device.

Over time, being unable to install apps due to insufficient storage became very frustrating and that itself was a deal-breaker for us. Therefore, if you love downloading and installing lots of games and apps, we would suggest getting nothing less than 16GB of built-in storage.

As such, this round easily goes to the M52.

Xiaomi fitted a capable 13 megapixel rear camera with an f2.2 aperture and LED flash, plus a 5-megapixel front-shooter on the Redmi Note. The M52 has a 13-megapixel camera and flash as well but the f2.8 lens is not as bright. However, it ups the stakes with an 8-megapixel front camera with an f2.0 aperture and a wider angle lens.  This 13 + 8 megapixel combination for under US$180 is great value.

Comparing both cameras however, the Redmi Note’s rear camera produced pictures that looked more vibrant and saturated, and had better contrast, thanks to the larger aperture on the lens. The M52’s camera sensor tended to overcompensate in dark situations and the photos ended up grainy as a result.

See the examples below, where the photos from the Redmi Note are on the left and M52 photos are on the right. 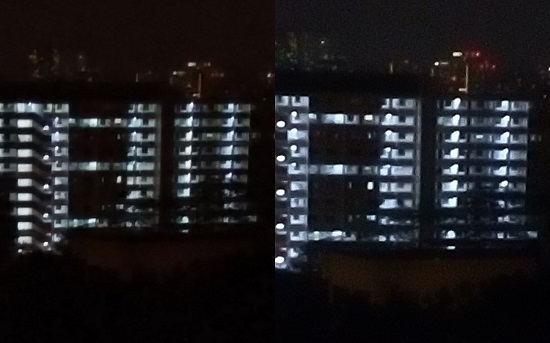 Flash photography is better on the M52 when there is ambient light available, as it produces better skin tones – but it fails miserably compared to the Redmi Note in very dark situations.

Overall then, the Redmi Note’s imaging chops delivered a solid punch to the M52. Although both devices run on Google’s Android 4.4.4 (KitKat) operating system, Xiaomi’s MIUI overlay is already in its sixth incarnation.  MIUI doesn’t feature with an app drawer, but offers all the apps on the home screens. To add widgets, simply pinch the screen and the customisation options would appear, including the ability to add widgets, change the wallpaper and animation effects.  Tapping the menu button (on the left of the home button) would call up recent apps which you can then close, in order to free up some memory. Swiping down from the top calls up the Notification panel, which also provides plenty of shortcuts to manage your device connections and display options. Swiping from one side to the other on the bezel below would also call up ‘One-handed mode’ which would resize the interface to smaller format so you can operate the device with one hand.

Xiaomi has also preloaded a useful barcode reader and a built-in security app to protect against mobile malware, and you can easily change the themes on the device by downloading new ones online.

It also comes with useful widgets for creating a hotspot, turning on the torchlight function, or clearing the memory cache.

However, if you’re the type who prefers a stock Android experience, with zero bloatware and a pure Google-designed user interface, then the M52 Red Note will be completely up your alley.

The app drawer is intact, and there no extra apps save for those essential ones such as Camera, Music and File Manager. For everything else, you’re expected to download them from the Google Play store. Within the Settings there is also the ability to turn on ‘Screen gestures’ which lets you control the display when it’s on standby (black screen) mode. As such, you could double-tap the screen to light up the display for example, or control your music by using screen swipes.

Disappointingly though, the M52 was supposed to ship with Android 5.0 (Lollipop) but the company has instead slated this for a future update.

Winner: It’s a tie, as it really depends on which type of software interface you prefer.

However, taking into considering the price point, the hardware specifications and the fact that the design is pretty much the same across both devices, the M52 Red Note is clearly a better deal. The only reasons why you would still purchase the Redmi Note 4G are because you’re a fan of Xiaomi or its user interface MIUI, or you prefer a device with a nicer looking display and slightly better performing camera.

If only the Redmi Note came with 16GB of storage, that would have clinched the deal for Xiaomi. Still, both devices are good choices for those on a tight budget, or who choose not to pay a hefty premium for smartphones, as these mid-ranged phablets punch well above their weight. MESTECC pushes for US$4.85m corporate tax incentive to be introduced before year end

The future is Digital, let’s not risk being left further behind