U MOBILE Sdn Bhd, the fourth largest mobile operator in Malaysia, is planning a capital expenditure (capex) of RM3.5 billion to RM4 billion (US$790-900 million at current rates) over the next five years, mainly to expand its network coverage by adding 5,000 new sites.

While the company has yet to make a final decision on how many of the new sites would be on 4G-LTE (Fourth Generation/ Long-Term Evolution) technology, its chief technology officer Too Tian Jen said that it is likely that 60% of its sites would be powered by 4G.

“We are committed to investing about RM700-800 million on capex. The bulk of the capex will be used on network and IT (information technology).

“As for the ratio of 3G and 4G LTE networks, at the end of the day, it really depends on customer demand and usage,” he told a media conference in Petaling Jaya yesterday (Oct 1).

At the media conference, U Mobile announced that it had completed the addition of 1,000 4G LTE sites three months ahead of schedule.

These new sites are located across the Klang Valley, Putrajaya, Seremban, Port Dickson, and Johor Baru.

“With the addition, U Mobile’s customers will enjoy uninterrupted high-speed connectivity with data speeds of up to 75Mbps at more locations than ever before,” Too claimed.

He said that U Mobile’s investments on 3G and 4G LTE are crucial, as some 70% of its customers are smartphone users. 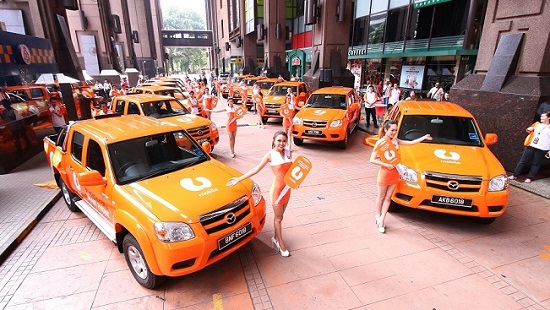 Currently, U Mobile has 800 4G LTE sites in the Klang Valley and 200 in Johor Baru. Its 4G LTE network covers about 28% of the country’s population.

“This will increase our 4G LTE coverage to 30% of the total population in six months. It will also cover 75% of the population in the Klang Valley and 70% in Johor Baru,” he added.

U Mobile has been very aggressive with its prepaid and postpaid plans in recent years, striving to capture market share from its rivals.

For example, it launched a Hero Postpaid P70 plan with which customers can enjoy 7GB of data as well as unlimited calls to all networks for RM70 a month.

It also launched the Power Prepaid Pack which gives their customers free 1GB high-speed mobile Internet every month for life, as long as the SIM card is kept active.

Too said that one of the reasons it is able to offer these attractive packages is because U Mobile,  being relatively a young mobile operator, is not burdened with legacy telecommunications infrastructure.

“Our network is the only one specially designed for data. If you look at the others, some of them have networks that were designed more for voice than data.

“So most of the others’ networks are actually voice networks which they retrofitted over the years to become data networks.

“We are different. We came in 2007, we launched 3G – which was actually developed for data. We are data-centric telco and we are committed to grow our network,” he said.

“The other difference is that we build the network first, and then only try to attract customers. We are very forward-planning because we want to be the network of choice.

“Of course, we also manage our cost well so that we can past on the savings to our customers,” Too added.

U Mobile gets aggressive in expanding 4G LTE coverage