CONVINCED that the creative element is in abundance in the country, Malaysia’s national ICT custodian Multimedia Development Corporation (MDeC) partnered with Google Malaysia to launch the ‘Made for YouTube’ pilot programme in December 2014.

The programme was the first of its kind in South-East Asia, according to Sajith Sivanandan, managing director of Google Malaysia, Vietnam, Philippines and New Emerging Markets.

MDeC was also determined to help local content providers get a bigger chunk of the RM7.1-billion (US$1.6-billion) revenue generated by the Creative Content Cluster of the MSC Malaysia (Multimedia Super Corridor), which comprises about 470 companies.

MDeC manages MSC Malaysia, which aims to develop the ICT industry in the country.

Designed to nurture and elevate the influence of Malaysian YouTube channels, 15 MSC Malaysia status companies and five independent content creators were chosen for the ‘Made for YouTube’ programme.

Key to being picked was ownership of intellectual property (IP) which allows the companies to monetise their assets and be self-sustaining on YouTube.

Though no funding was available, the companies have been receiving support in the form of production facilities, dedicated manpower, growth strategies, and advice from MDeC and Google.

“This programme is part of MDeC’s game-changing mission to spur the creative content landscape, with our aim to position Malaysia as a regional hub for creative content,” MDeC chief executive officer Yasmin Mahmood said at an event on Nov 13 in Kuala Lumpur that showcased two of the companies in the programme, Grim Film Enterprise and DD Animation Studio.

The regional hub ambition itself is an offshoot of the 2012 Digital Malaysia agenda, where one of the three thrusts is to move Malaysians from being consumers of digital services to producers, thereby creating new income possibilities via the many digital platforms and business models.

MDeC is also the lead agency for Digital Malaysia, whose two other thrusts are:

To gauge the effectiveness of the programme, a combined revenue target of RM1 million was set for the companies. [RM1 = US$0.23 at current rates]

The target was exceeded, claimed an MDeC executive who preferred anonymity, while also declining to provide the actual amount.

The progress of both Grim Films and DD Studio during the programme attests to its impact.

Grim Films had a five-min feature The Long Distance Relationship that garnered over two million views, while DD Studio saw 5.6 million views (since June 2014) for its Didi & Friends' Kalau Rasa Gembira, a series of two-min edutainment clips in Bahasa Malaysia for children from ages one to six.

One significant outcome from the programme is a co-production deal that DD Studio signed with broadcaster and satellite-TV operator Astro, which will see 26 11-minute episodes air next year on a kids’ channel, with the IP co-owned with Astro.

It is typically very difficult for independent studios which have never made any TV shows to sign such a deal with a major broadcaster, but the availability of a global distribution platform such as YouTube has shaken the traditional value chain of the video content industry.

Seizing this opportunity, MDeC wants to help more content creators monetise their work by starting with YouTube as their main platform.

While the term ‘YouTubers’ is used to describe those who leverage on YouTube as their main distribution platform, MDeC is hoping that once they have successfully leveraged on YouTube, content creators will get on the radar of traditional broadcast players and be able to negotiate content deals there – as DD Studio has done.

“We feel the potential is tremendous and want to encourage more creators to start with YouTube,” said Yasmin.

She argued that we are now in a new era where ‘new media’ is not new anymore but is mainstream, stressing the prominence of digital distribution versus the traditional manner in which video content has been channeled through traditional broadcasters.

“Before you could only go through TV3, RTM and Astro,” she said, referring to traditional broadcasters. With the goal of encouraging more content creators to start their companies and create content for YouTube first, MDeC hopes the tools and training its programme with Google provides will boost their chances of success.

“We want them to use the right tools the right way,” said Yasmin (pic).

“There are a lot of small things that you can do here and there that help you get a better idea of how your content is being consumed, and what you can do to maximise its exposure,” he added.

Google’s Sajith said that that 91% of Malaysians are ‘multi-screening’ while watching TV, arguing that the Malaysian market is fertile ground for homegrown creative content to reach a large audience without being handicapped by not being on traditional TV. 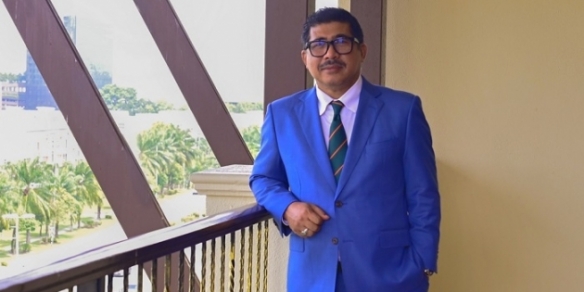